September 14, 2010
You know, as a Canadian, I've never quite felt comfortable with American gun laws. How do the majority of Canadians feel about guns? Well, our government has encountered significant opposition to its plans to do away with the so-called long-gun registry. The biggest opposition comes from the nation's chiefs of police.

Here in Canada, when some other driver cuts you off you lean on the horn and give them the finger and maybe even yell a well chosen expletive out the car window.

I'd be afraid to take similar action if I was driving though certain American states. You know the ones. Where they throw in a free gun rack with your new pick up truck purchase. Imagine flipping the bird and telling someone where to go and the response is a well-aimed blast from a shotgun.

I came across a story recently that reinforced my concerns. 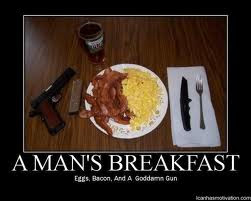 Some guy in a rural Kentucky trailer park - that should have been my first clue - mortally shot his wife, his step-kid and three neighbours because he didn't like how she prepared his breakfast. This is no joke. Apparently he didn't like his eggs. Bizarre? Eggs-actly.

Imagine living with this guy. It sounds as though he had no sunny side. I'll bet he was a real hard-boiled individual. He could have cracked at any minute. Being around him would have been like walking on egg shells. His wife must have felt like she had a yoke around her neck. If you ask me I think this guy must have been hungover or somewhat fried. I mean shooting 5 people because you didn't like how your eggs were fixed? What's that all about?

And then he waited an hour for police to arrive - yep they move real quick down there in rural Kentucky - before turning the gun on himself.

Oooo, I bet that scrambled his brains. 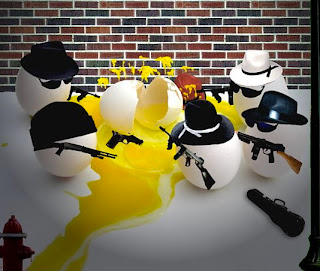 Guns and eggs - a dangerous combination.

Anonymous said…
There is something wrong when you can buy your eggs, bacon and ammunition in the same store.
As stupid as the whole long gun registry fiasco up here was, I'm still glad that we don't have a big gun culture in Canada. - G
14 September 2010 at 10:00

nonamedufus said…
G: I'm with you. It'd be like ordering breakfast with a side of Smith and Wesson. Not very appetizing.
14 September 2010 at 10:13

Leeuna said…
She should have served oatmeal. Here in Southern Appalachia we take our breakfast very seriously. Great post, Dufe. You're punny.
14 September 2010 at 10:29

nonamedufus said…
Leeuna: Oatmeal? That's not a serious breakfast. And besides, she would have run the risk of serving it too hot...likely with the same result.
14 September 2010 at 11:07

Anonymous said…
Ah! You "cracked" me up, my friend! hee hee

And where can you buy a gun and eggs?

Why, WalMart, of course!

nonamedufus said…
Quirks: I'm glad you enjoyed the yoke. They sell firearms in Arizona WalMarts, eh? So you're saying that in buying a gun, it's "easy over" there?
14 September 2010 at 11:12

Canadian Blend said…
We had a record snow fall a couple of years ago (20 inches... which is a lot for the part of Ohio I live in). Everything on Main Street in the town I live in was closed... except the gun store. (Because, when the snow gets deep, you're gonna want to be armed.)
14 September 2010 at 11:26

Donnie said…
Guns get a bad wrap. Especially when you shoot the wrong person. Well, down here it's best to know that even little granny may be packin' a S&W. So beware how you cook those damned eggs!
14 September 2010 at 11:27

nonamedufus said…
Don: I somehow knew the position you'd take my friend. I'll remember to not ask granny to fix my eggs.
14 September 2010 at 11:31

Unfinished Rambler said…
I am not shocked that you weren't over easy on this subject.
14 September 2010 at 12:03

nonamedufus said…
Unfinished Rambler: I guess it's been my readers' eggsperience to eggspect a pun or two.
14 September 2010 at 14:51

Unknown said…
Today the radio said that a lot of 10 year olds in the UK have been given gun licences. Apparently our gun laws are not clear at all. I had no idea. I should get one for the cat.
14 September 2010 at 15:48

nonamedufus said…
Chris: 10 year olds!? My God that's ridiculous! They can't even drive, drink, or vote yet. After I saw your comment I went and read an article on this. Amazing. Good luck in consolidating what appears to be conflicting gun laws/legislation. Your MPs have their work cut out for them.
14 September 2010 at 16:02

Ziva said…
If the rest of the world had the same gun laws as the USA, we would all go to hell in a handbasket. Filled with scrambled eggs.
14 September 2010 at 16:05

Linda Medrano said…
As the daughter of an SFPD officer, I grew up around guns. I know how to shoot them, clean them, and respect them. I am neither for nor against gun ownership by responsible people. But I think that people should have to be tested on and demonstrate knowledge of guns, and gun safety before they purchase one.
14 September 2010 at 18:25

MikeWJ at Too Many Mornings said…
This reminds me of another true American story from right here in Colorado. A family was having breakfast in their trailer, and the husband told his wife he didn't like her pancakes. So she stabbed him to death, right in front of the kids. He fell face down into his pancakes, and they finished eating breakfast while waiting for the cops to arrive. True story. No shit. America's fucking crazy, NoName.
15 September 2010 at 00:04

Andy D said…
We just love our freedoms in America. And in a free society some people will abuse those freedoms. Of course, this guy was a nut (sorry I'm not good with the egg puns), and would have killed his family without the gun. The gun just made sure he made it into the papers.
16 September 2010 at 04:53

Don said…
WELL written piece!! And I love my guns.. (Although I only have two, soon to have a third...)