September 09, 2010
While the Obama's were on vacation... Which one? The last one. ...POTUS had his office renovated. Among the changes was a new carpet, complete with historical quotes which run around the edge of the rug.

But the Washington Post reports a mistake was made. The quote "The arc of the moral universe is long, but it bends toward justice" has been attributed to Martin Luther King. Turns out King, who used the phrase often, neglected to cite it's source. According to the Post it was first uttered by Theodore Parker "an antebellum American reformer...abolitionist, Unitarian Minister and Transcendentalist thinker". 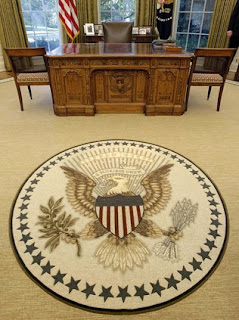 Where's POTUS? Not another vacation!
But what the Washington Post neglected to report, which we're pleased to share exclusively after long and exhaustive research, was there were other errors on the carpet, not to mention his dog Bo's fresh little"gift" on the new floor covering.

Theodore Parker's better known brother Fess Parker is also quoted, or should we say misquoted with "Don't forget the beer." The fact that he was portraying Davy Crockett at the time didn't seem to dawn on the carpet makers.

Others apparently cited are Mrs. Abraham Lincoln with, "Apart from that, I quite enjoyed the play."

Nathan Hale makes an appearance with, "I regret that I have but one life to give for my country but, hey, guys if I don't get a cigarette I'm gonna die."


Canadian-born game show host Monty Hall was fittingly chosen because of the number of exits in the Oval Office. "Do you want door #1, door #2 or door #3?


Leonard Nimoy makes an appearance with his insightful "I am endeavoring, ma'am, to construct a mnemonic circuit using stone knives and bearskins."

One of the President's favourite movie heros is also quoted.  John Wayne had a keen insight into how government works, "When you've got them by the balls, their hearts and minds will follow."


And finally, from the world of music, the POTUS has chosen an apt line first uttered by Gerry Garcia, "What a long strange trip it's been."


The President's wife, Michelle, was said to be upset over the lack of any reference to the right to bare arms.

This post originally appeared at The Parody Files, a well-known dufus reprobate associate.

Anonymous said…
Great job weaving a Canadian into the rug. I wonder what our version would look like? Sadly I can;t really remember too many memorable things that Canadian Prime Ministers have uttered. - G
9 September 2010 at 09:15

nonamedufus said…
G: "Fuddle Duddle" Pierre Trudeau
"You had an option, sir" Brian Mulroney
"The Liberals are the flying saucers of politics" John Diefenbaker
"I get sick... not because of drink [but because] I am forced to listen to the ranting of my honourable opponent." John A. MacDonald

Donnie said…
Only thing missing from that rug is Hillary Clinton's face stitched tightly in place with Bill's shoe laces.
9 September 2010 at 10:34

nonamedufus said…
Don: Um, what are you trying to say Don? You know I left out Bill's quote: "I did not have sexual relations with that woman." And Hillary's quote: "You're sleeping on the couch, asshole."
9 September 2010 at 11:05

Anonymous said…
You hit the funny nail on the head...again! In true Nomie style!

And I don't know if it's good or bad that I couldn't stop snorting at Mrs. Lincoln's quote.

commoncents said…
I'm glad I found your blog!! Keep up the great work!!!

nonamedufus said…
commoncents: I'm glad you enjoy the blog. My blog roll's limited to humour blogs and even at that I've just cut it back. Don't think I'll be making any additions just now, sorry.
9 September 2010 at 21:35

MikeWJ at Too Many Mornings said…
You've really been cutting the rug lately with these puns, NoName. Good thing you're good at it, or you'd come unravelled.
10 September 2010 at 00:53