What A Week With Whitey

September 27, 2010
Last week I headed west to Toronto for a visit with my brother. Fooled ya, eh? All the while you thought I was here. Well, through the magic of post-dated posting I was able to schedule my posts and toodle off to see Whitey.  You guys remember Whitey? 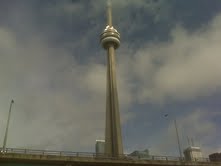 Toronto's CN Tower: flippin' the bird to the rest of the country.
It was a great week. Real quality time. I helped him paint a bedroom in his house. Not unlike Picasso, he's going through his blue period. In return he was kind enough to feed me. For example, a couple of days he fixed his own special breakfast recipe Eggs Florenjim. (That's a pun. What? Like you haven't come to expect them around here?) You see his name's really Jim and he fixed Eggs Florentine, or as we agreed to call it with his special hollandaise sauce "Heart Attack On A Plate".  It was the fortification we needed to pick up those paint brushes and rollers. And each day, after a day of painting, at some point between 3 and 4 o'clock, we adjourned to his backyard for cocktail hour. Then as the new television season unfolded in the evening we'd (okay, me) fall asleep in front of the TV.

But Thursday was different. Thursday afternoon we'd set aside to see a baseball game at Rogers Centre, or if we go back to when it didn't have a corporate sponsor, the Sky Dome. With the regular season dwindling down the Seattle Mariners were in town to take on the Jays. Both teams are out of the playoffs, and in the basement of their respective divisions. But there's nothing more fun than a baseball game on a sunny fall afternoon. 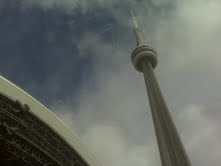 Sky Dome roof was open. There's that damn tower again.
Who would have thought the game would have been so memorable. First, we bought our tickets from a scalper. Yeah we do our part to support the economy...the underground economy. And what seats. Second row along the third base line near the dug out. 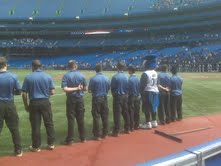 The grounds crew and mascot "stand on guard for thee"
In between ducking the line-drive foul balls hit our way, we watched Jay slugger Jose Bautista hit his 50th home run, a team record. I think he reached the team record at 47 but like Whitey says 50 is such a nice round number. And nice of him to do it while we were there. And to let me take his picture on my cheap little camera phone. 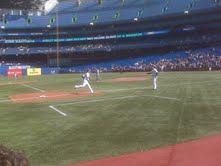 Bautista rounds third base on his way home.
If that weren't enough Mariner Ichiro Suzuki got his 200th season hit. This makes it 10 seasons in a row he's attained that remarkable stat.

Bautista hit his homer in the first inning and it proved to be the winning run. With only 2 hits the Jays won 1-0.

With the game over by 3:30 and nothing else to do Whitey and I returned home and retreated to his backyard to partake in our last cocktail hour. What a great ending to a great week. Thanks, Whitey! 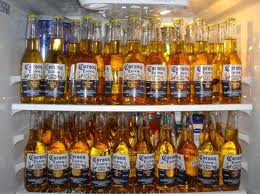 I think our cocktails are gonna take more than an hour.

Anonymous said…
Wow. Looks like you had more than a great time!

And I thought poutine was Heart Attack On A Plate.

Gag. Sorry, my Canuckster Friend, but the thought of poutine results in a wave of nausea (kinda like chemo, eh?).

Donnie said…
That does sound like fun though. Even though I'm not a big baseball fan seeing a game in person is much different than on t.v. Almost makes it worth paying five bucks for a stinkin' hot dog.
27 September 2010 at 12:24

nonamedufus said…
Quirks: No poutines were harmed during this road trip.
27 September 2010 at 13:51

nonamedufus said…
00dozo: Yeah, I know, they used to say the tower was an appropriate display for a city full of pricks. Condome. Hadn't heard that but I like it.
27 September 2010 at 13:53

Nicky said…
Ok, being from Montreal, I have to (by law) rag on you for going to Toronto and watching the Jays! At least you made up for it by drinking copious amounts of our national beverage :-) Glad you had a good time!
27 September 2010 at 19:42

nonamedufus said…
Nicky: Been some time since Montreal had a baseball team, although I was at the Big O for the last game. By the way, after the week in TO I passed the weekend in Montreal. Spent Saturday strolling rue St Denis!
27 September 2010 at 19:55

nonamedufus said…
brookeamanda: Is he your younger brother who people mistake for your older brother and have white hair?
28 September 2010 at 07:32