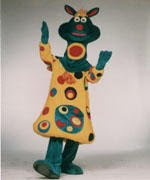 A long time ago, when I was 22, my first child was born.  That kid grew up on a little Canadian kid's show called Polka Dot Door, produced by the TV Ontario network.  And Dad, more often than not, sat through those shows with his little one.

Nine or so years later when a brother, and a year after that when a sister came along number one son was moving on to Knight Rider and The Dukes of Hazzard.  But there was a nice overlap where his siblings picked up where he had left off with Polka Dot Door.  And Dad was right there to welcome them.

So you're looking at a Polka Dot Door veteran.  The show began in 1971 and ran to 1993.  I didn't watch the full run but I did get in my fair share.  The formula was pretty simple.  A young male and female host, which seemed to change every week, sang songs, told stories, made crafts and generally did their best stimulate little brains.  The show opened as follows...

Imagination Day!  Oh boy!  You know what happens on Imagination Day?  That's the day Polkaroo visits.  TV Ontario wasn't stupid.  They made Imagination Day Thursday so kids would watch Monday, Tuesday and Wednesday to see if he might show up and Friday in case he came back.

But you know something?  There was a strange occurrence every time Polkaroo showed up.  You know what it was?  The male host disappeared.  Yeah, that's right.  For some strange reason he disappeared every single time Polkaroo was on camera.  I think he actually had a weak bladder but you never know.  And Polkaroo wasn't the sharpest knife in the drawer.  He didn't talk.  All he did was in a hallow, owl voice exclaim "POLKAROO" when the female host accurately guessed the meaning of his mimed motions.  And this is what happened every time the male host came back...

"The Polkaroo was...here.  And I missed him...again?  Yep every week we laughed at the guy with the bad bladder.  It seemed every Thursday when he rushed to the washroom - or at least we think that was the explanation - the Polkaroo showed up.

Yep, for 22 years the male host never saw Polkaroo.  That's Polkaroo...with a capital pee...on The Polka Dot Door.  I wonder if the kids ever caught on?

And that's what I think of when I think of polka dots, the topic for this week's Theme Thursday.  Check them out and see what other bloggers came up with.

Brian Miller said…
nice. i have seen this on a couple of tt posts...and i must say i am completely unfamiliar. it fels like i am reading a chapter i skipped in a book. thanks for awakening me.
7 January 2010 at 06:43

http://howtobecomeacatladywithoutthecats.blogspot.com said…
The Polkaroo? Seriously? You Canadians!
7 January 2010 at 07:02

Moooooog35 said…
What is wrong with your country?

nonamedufus said…
moooooog: We see the Prime Minister about as often as we see Polkaroo...aw, I missed him again.
7 January 2010 at 07:30

Simpson/Lynch Studios said…
Kiddie show characters stay in the mind for years... even if we try to expunge them.
7 January 2010 at 08:23

The Clever Pup said…
Good take on the theme, my fellow Canadian. But what a baad show. I can still hear the music. Thank goodness TVO grew up a little.
7 January 2010 at 08:25

nonamedufus said…
S/L Sudios: Oh, for sure. But shows for pre-school kids have sure changed as I watch my grandkids glued to the TV.
7 January 2010 at 08:32

nonamedufus said…
Clever Pup: But it sure entertained them, no matter how simple.
7 January 2010 at 08:33

Tess Kincaid said…
Gosh, I loved those little local kids programs. I can think of a few of them myself. Thanks for the memories. Great post.
7 January 2010 at 08:42

Anonymous said…
Ha! Sorry but Polkaroo reminds me of Barney the Dinosaur.

And it just goes to show once again the difference between Americans and the rest of the world.

Even our cartoons are obese in comparison with the rest of the world!

Donnie said…
Oh come on. You don't really think the male host was doubling as Polkeroo do you?! I'll bet you think Santa Claus doesn't really come down chimneys and ride in a sleigh too!
7 January 2010 at 10:22

Me-Me King said…
What a hook!

Our local programming was Bozo's Big Top. Bozo was played by one of the evening newscasters. When my kids would hear his voice during the news they would come running in and could not quite figure out where Bozo was. I even caught my son looking behind the TV once.
7 January 2010 at 10:38

nonamedufus said…
Quirks: Barney was ahead of his time, with a big ass. Polkaroo was always a little behind.
7 January 2010 at 13:01

AngelMay said…
Kids are SO easily fooled. I was grown and GROWN before it finally dawned on me that a couple of cats I had once didn't really run away as my mother told me they did. Or...maybe it is just *I* that am easily fooled. Sigh.
7 January 2010 at 13:24

Anonymous said…
I've never even heard of that show. I do miss watching little kids shows too!
7 January 2010 at 14:05

nonamedufus said…
thinkinfyou: Made in Toronto and aired only in Ontario.
7 January 2010 at 14:56

Baino said…
Haha he's so lame! Thank God for Sesame street. Why aren't kids terrified by a thing like that going around saying little more than 'pokaroo'. Then we have a bear called Humphrey who doesn't speak a word and wears a waistcoat, tie hat and no pants!
7 January 2010 at 15:39

nonamedufus said…
JeffScape: Polkaroo creeps you out? Why would an 8-foot tall silent polka dot on legs creep you out?
7 January 2010 at 17:31

brookeamanda said…
I LOVED The Polka Dot Door and NONE of my friends remember this show. I had no idea it was Canadian...it came on right after Sesame Street on PBS here in the states.
7 January 2010 at 21:37

nonamedufus said…
BrookeAmanda: It was the first Canadian kids show to be syndicated in the States and ran on PBS from 82-88.
8 January 2010 at 04:58

The Mistress said…
Imagination Day? I love that:)