The Ups And Downs Of Toilet Etiquette

Yeah, that's right.  I've now raised (pun intended) one of the most taboo subjects known to man and marriage -- the toilet seat. 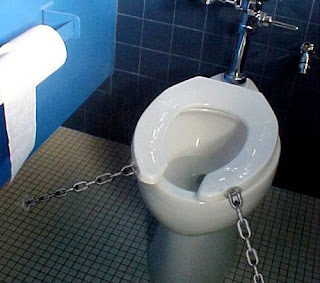 Why is it that the guy is in the wrong when he leaves the toilet seat up after doing his business?  Huh?  Why isn't the woman in the wrong for leaving it down?  You know, guys?  Yeah, I mean, then we have to go in and lift the seat so we don't pee on the friggin' thing.  Shouldn't the woman lift the seat when she's done doing her business so she won't have to worry about cleaning up after us?

Why is it the guy has to lower the seat for the woman and not the other way around?  I mean this is 2010 now.  Are we still opening car doors for women?  Loaning women our jacket on a chilly evening? Buying dinner and wine before sex?  Okay well maybe that last one.

Anonymous said…
Nomie! I'm shocked! Jus shocked. You put the seat down for your wife?

All these years I've been putting the seat up for my hubs.

No wonder he loves me so!

nonamedufus said…
Quirks: I'm willing to leave it up half the time if she leaves it up the other half the time. It's a whiz-whiz situation.
11 January 2010 at 08:45

Donnie said…
This is a gender genitalia issue I've had for years. Sitting or standing. It doesn't matter. That's why the lid goes up and down. Just move the thing to your desired position, and do your business with a clear conscience and closed mouth.
11 January 2010 at 09:31

Me-Me King said…
This very well could be the reason I have stayed single for so long. There is nothing more frustrating than running to the toilet with my pants half way down then landing up to my navel in toilet water because some guy left the seat up.
11 January 2010 at 14:10

nonamedufus said…
Me-Me: Truth be told my first wife fell into the toilet after I left the seat up in the middle of the night. My God that was funny. Well, to me it was. Ever since I've put the seat AND the lid down after every use. Don't tell anybody, though. I'd hate to ruin my image.
11 January 2010 at 14:53

The Hubby Diaries said…
I'll just start by agreeing with Moooooog35... cause well, guys ARE always wrong. Good, now that we've got that out of the way.

There's something to be said (even by a man) about the possibility of accidentally putting your tush into cold, wet toilet water (especially in the dark). Sounds gross doesn't it.. well, I can assure you, it feel even more gross than it sounds.

Therefore, if you love her, to protect her delicate tushie, you should put the seat down 100% of the time!

http://howtobecomeacatladywithoutthecats.blogspot.com said…
iDifficult still plays that trick with the cling film? It's an old trick, but it still works every time.
11 January 2010 at 18:09

Deb said…
Falling in is one reason the seat should be down as Me-Me King pointed out. Also, you guys have the splash factor and often times aim issues, making that rim a bit gross. Easiest solution: everyone puts the seat AND lid down when done. Now, which way the toilet paper hangs is another issue.
11 January 2010 at 18:11

K A B L O O E Y said…
Our debate is over the lid. I don't bother putting it down, but my guy worries the crap I have piled on the shelf above the toilet will tumble in. I say life's too short. I have been known to back in and hit the cold water if the seat's up, but then, more often I've plonked down on a closed lid. It's not as miserable a sensation, but neither's pleasant. Lid up, seat down -- make it easy for me, huh?
11 January 2010 at 21:00

MikeWJ at Too Many Mornings said…
I've long argued about this with my wife. And lost. Her reasoning goes like this: A woman needs the lid down to poop and pee, or 100 percent of the time. A man needs it down to poop, and up to pee, or up only 50 percent of the time. So, logically, it should remain down. I don't have any reasoning, and never, ever win the argument.
11 January 2010 at 22:39

nonamedufus said…
Kablooey: Dude if you're putting your crap on a shelf above the toilet you're doing it wrong!
12 January 2010 at 04:56

nonamedufus said…
Mike: Why don't we let women completely dominate us and just squat to pee. Then the seat would remain down without any effort from us. The we'd always clean the toilet. Then we'd always pick up our clothes off the floor and put them in the hamper. Then we'd always rinse the dishes. Then we'd never watch football on Sunday. Whoa, back up. This approach would seem to have its faults.
12 January 2010 at 05:01