The Sanctity of Sunday

January 25, 2010
In our house there's one day of the week that is special.  It's held in extremely high regard.  And we - well I do - anticipate it's arrival with reverence and awe.  And when it arrives my family room becomes a house of worship and the lord help anything or anyone that comes between me, my couch and my high definition big screen television -- unless she's serving chips and some liquid refreshment. 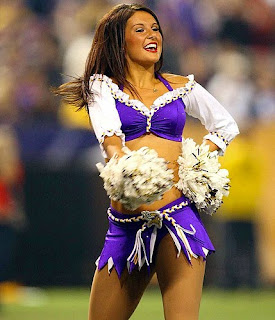 Hey, c'mon, I watch it for the football.

There is a high degree of worship on this day which begins when the television clerics take viewers through the contests yet to come and the combatants yet to battle each other and the skills expected to be displayed up and down the grid-iron in the form of throws, catches, kicks, tackles, touchdowns and the odd hail mary.  And the skill that is displayed isn't limited to the playing field.  There is also a laying on of hands upon a magical hand-held device and a worshiper must be extremely adept at switching between the many matches on display in order to observe their beloved hero score an elusive touchdown.

Of course the measure of the true believer is his level of endurance.  The two afternoon services, including the pre-match devotion can together last up to eight hours.  For the truly devoted, a third service, conducted by Father Al Michaels over at the church of NBC can tack on another three hours or so of worship, marking the truly faithful among us ready for sainthood.

And now the world-wide congregation awaits the Super Bowl, the highest of high masses for fanatical football followers.  And then...

And then worshipers will be without their idols.  No eight to twelve hour Sunday sessions.  There will be much wailing and gnashing of teeth.  We'll have to talk to our wives...and watch...chick flicks!

Donnie said…
Amen! Couldn't have said it better myself. I'm trying to draw an analogy to the cheerleaders and something in a church and the closest I get is a choir. Oh well, let the games begin! Hallelujah!
25 January 2010 at 07:25

Skye said…
I have to agree with Don on this. The church choir "cheers" on the preacher with the songs, Cheerleaders do the same. They keep the audience/congregation enthralled in-between plays, they keep the players motivated to put on a good show, and they enhance the rivalry between the different church teams. Yep, it's a good analogy to the Church of Football!
25 January 2010 at 08:23

Anonymous said…
Ah but the church of football is a church filled with patrons that YELL, SCREAM, CURSE at the very idols they worship.

Makes for a holy day.

Holy cow! The word veri is back! Yeehaw!

nonamedufus said…
Quirks: Doesn't take much to keep you happy! Sorry about the word veri. I was getting too much spam and I was running around deleting it. I really have better things to do. I do. Really.
25 January 2010 at 10:46

nonamedufus said…
idifficult: You Brits are all alike. This isn't that pansy sport Cricket. This is the National Football League - the sport of real men...and diehard fans.
26 January 2010 at 17:30

Chris said…
You nailed this one, Dufus. And MAN, my Jets almost pulled off the miracle.