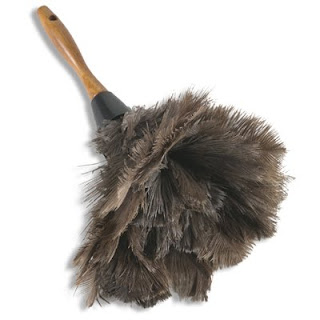 What's going on?  My feather duster keeps sneaking back into the house saying it wants me back.

I used to think that was one of the stupidest commercials known to man and cleaning products.  But you know, it's grown on me.  It's one of those things that gets funnier every time I see it.

Speaking of stupid things, now Brangelina appear to be on the brink of nevermore...quoth the raven.  Yep, their 5 year, 33 kid relationship appears to be coming to an end.  Gossip sites say they've already been to the lawyer to split up their joint $300 million fortune. 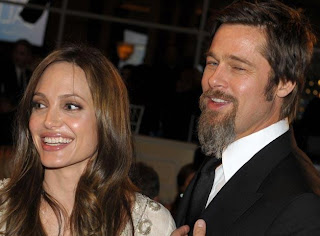 But wait, another site says it's hogwash. Now there's a word that show's my age.  They're not splitting up it says.  A third site says "maybe".

And what's up with that term Brangelina.  These people have names.  Brad Pitt and Angelina Jolie.  Why didn't they call them Angerad or Pittlie or, geez I don't know Brad and Angelina.

It's like they're a corporation or something.  Brangelina Inc.

They're rich enough to be one.  And now it seems they've come to a parting of the ways.  What a couple of assets.  Assets...not asshats.

So what do you think set it off?   Did Angelina want to adopt more kids?  Did Brad refuse to shave that silly goaty-looking goatee off?  Woah!  Talk about your feather dusters.

Does anyone really care?

If you ask me, it's only a matter of time before one is telling the other those three little words...

Me-Me King said…
If you ask me, and I guess you have, Angelia got more of an I.D. than Brad in their brand. Wonder if this will continue to play out in their settlement?
26 January 2010 at 09:39

Anonymous said…
Say it isn't so! The fantabulous couple of all time can't be splitting up!

33 doesn't divide evenly. Whatever will they do?

Donnie said…
If ever my mop resembled Angelina Jolie, I would have only two thoughts on the matter. One, the drugs have kicked in and two, "baby come back."
26 January 2010 at 12:21

K A B L O O E Y said…
Ah, there's kids in the mix, so not making easy jokes, but you think these showbiz types would learn to wait before rushing headlong into having kids, marrying, etc. (Brangelina isn't (aren't?) married, are they?). But no. Can't say I thought this one would last forever...
26 January 2010 at 14:00

http://howtobecomeacatladywithoutthecats.blogspot.com said…
That swiffer commercial makes me crazy! Both the commercial and Brad's goatee have got to go!
26 January 2010 at 18:52

nonamedufus said…
CL: Couldn't agree more. That song's been in my head for days now! And that beard looks like a feather duster.
27 January 2010 at 07:32

Jackie said…
wow, I was wonderin about them two .... I like them and I think they should get out of the limelight and say goodbye to their acting careers and get a real job ....like working on their family. I'd hate to see them two split and hear all the crap from the media . I hate bull shit .
28 January 2010 at 05:56

nonamedufus said…
Jackie: Thanks for your comment. Weird stuff, eh? The latest story sees Brad and Jennifer back together. Sheesh, how can people believe this stuff.
28 January 2010 at 07:18

nonamedufus said…
Jackie: But people spend money on those silly magazines. They just can't seem to get enough of the National Enquirer, etc. Sad.
29 January 2010 at 09:53