January 18, 2010
Four months ago I was poking fun at Brett Favre.   In a post in September I said Favre was over the hill.  Guess what?  I take it back.  At 40 he may be the oldest playing quarterback, if not player, in the National Football League but after watching him throw four touchdown passes yesterday in the Vikings' blow out of the Cowboys he's also the most passionate.

And passion is the word.  At 40 he still has the skills and abilities necessary to be a top QB.  An amazing feat in itself.  But Favre has a genuine passion and love for the game too.

After every touchdown Favre would run off the field and high-five and slap and head butt every player, coach and assistant within reach.  Hell we may even have seen him chest bump the water boy if they hadn't cut to commercial. 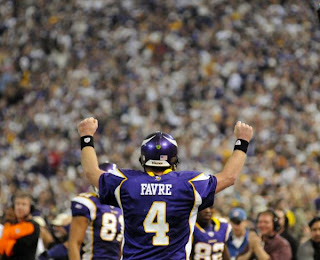 And it's his exuberance for the game that for a fan - for this fan, anyway - makes the game so enjoyable to watch.

Man, imagine going to work everyday and enjoying your job as much as Brett Favre does.

I hope Brett Favre never grows up.  And I hope he beats New Orleans next week and makes the trip to the Super Bowl as the oldest quarterback ever.

Moooooog35 said…
That's not exuberance over his touchdowns...he's just excited that he made it a full possession without shitting in his Depends.
18 January 2010 at 08:22

nonamedufus said…
moooooog: That's funny! I can always rely on you to bring a fresh *sniffs* perspective on things.
18 January 2010 at 08:38

Donnie said…
Favre played the same game here in college. The same...with passion. Down here we're torn between our "local" team winning or a local boy in Favre pulling out the win. On the other hand, like so many of us here, he spent as much time in New Orleans as anybody else did growing up. I don't mean playing football either.
18 January 2010 at 09:14

And let me add:

poker affiliate said…
Two games away from being recognized as the greatest to ever play the game.
20 January 2010 at 17:29

http://www.ehow.com/members/stevemar2-articles.html said…
Brett Favre has accomplished so much in the NFL. He is the only player to win the AP Most Valuable Player award three times. He holds several NFL records, including most career touchdown passes and most career passing yards, among many others. He is definitely worthy of being in the Hall of Fame, and should retire for good this time.
27 January 2010 at 12:20

nonamedufus said…
ehow: Thanks for the comment. He's pretty much done it all. Just disappointed he didn't make it to the Super Bowl this year. Now that would have been neat.
27 January 2010 at 12:43