January 28, 2010
It's happened to many of us, for whatever reason.  What?  Sleeping on the job.  However, for those of us it's happened to, we haven't had to suffer first national media attention, followed by international viral attention.

George Robitaille is a Toronto Transit Commission ticket taker.  A customer caught George napping at his post and snapped a picture with his video camera, e-mailed it to friends and from there the situation mushroomed. 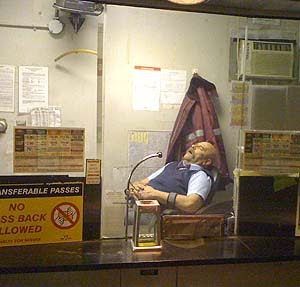 Transit Commission users have complained.  The city's in the midst of a race for a new mayor and this has provided grist to the mill in arguments over how TTC service needs to be improved.

It has also provided the basis for one of the funniest political cartoons to have appeared since Prime Minister Harper prorogued Parliament.  This week, this cartoon appeared in the Toronto Star. 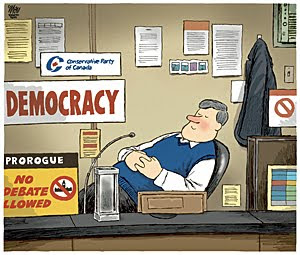 Robitaille has gone to great lengths to apologize to TTC customers and his bosses.  No word yet from Stephen Harper.

And I cant begin to count the number of days that I slept on the job.

nonamedufus said…
Quirks: I remember in my younger days staying up much too late enjoying myself to the point I couldn't stay awake at work the next day. Now a days it's a normal occurrence...and I don't even work...and I don't even have to stay up late!
28 January 2010 at 11:50

Donnie said…
Unfortunately, too many of these goofing off instances go unnoticed. Perhaps if more people would post pictures then somebody may get something done to clean up their waste.
28 January 2010 at 14:42

Chris said…
Hey! Luc! Tell your dad to wake up!

MikeWJ at Too Many Mornings said…
Gotta feel sorry for the dude. The actual dude, I mean, not the prime minister dude. I barely make it through most days without dozing off myself.
28 January 2010 at 15:38

Chris said…
Jeez, Dufus, you're Canadian, right? I thought at least YOU'D get it...