Show Us Your Nuts

January 22, 2010
Poor David Beckham.  Going after the man for his autograph I can understand, but this?

Remember that Armani underwear campaign where David and his "package" were on display for all to see in magazine centre-folds and giant billboards?

There was some talk at the time that the goods were enhanced...you know that there was some air-brushing done.

Well, it seems a female Italian television personality took it upon herself to find out.

Accompanied by a camera crew, she donned a pair of yellow rubber gloves and zeroed in on her target(s).

Beckham, who was in the midst of a TV interview was, to say the least, "caught" by surprise. 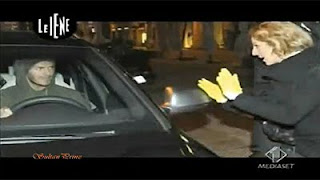 And the upshot of the exercise?  Beckham's wife has called her honey well-endowed, nick-naming him Golden Balls.

But the woman with the yellow gloves was heard to say as she was being dragged away, "I touched it but it's small.  David you have conned us all."

Beckham, who hasn't won a soccer cup recently,  might consider wearing one both on and off the field.

Anonymous said…
Maybe his nuts are hibernating for the winter?

Donnie said…
I don't know if his "package" was touched up or not, but you can bet that it doesn't matter to the average female looking at that picture.
22 January 2010 at 11:20

http://howtobecomeacatladywithoutthecats.blogspot.com said…
If that woman was really serious about it, she wouldn't have worn the rubber gloves. I mean sheesh... if you're gonna cop a feel, do it with feeling!
23 January 2010 at 08:46