September 22, 2010
The prompt over at Theme Thursday this week, or last week I guess*, is "reveal.

Well I guess, for some strange reason, the first thing that comes to my mind is a woman in a revealing dress. If you're upset by the gratuitous use of pictures of scantily clad women, I'm sorry. I guess it just reveals I'm a guy. 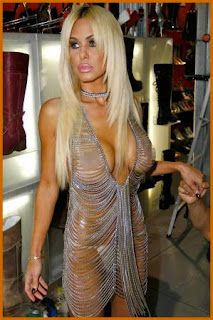 This is Shauna Sands. Now given the way she's dressed some might say she's not all there. Then again others might say it's evident she is all there.

Shauna was a Playboy playmate apparently and used to be married to Lorenzo Lamas, the son of actor Fernando Lamas. Now, there's some revealing facts. 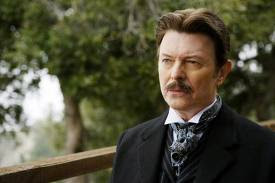 Also when I think of "reveal" I think of the excellent movie The Prestige with Hugh Jackman and Christian Bale. It's a film about competing magicians who each try to outdo the other. In the movie we learn that the three parts of a magic trick are "the pledge, the turn and the prestige". The prestige is in effect revealing the illusion. Indeed the movie unfolds in the same way with somewhat of a surprise ending. I won't reveal the outcome. But I will recommend you rent this movie. What I can reveal is that David Bowie played a small role in the movie. 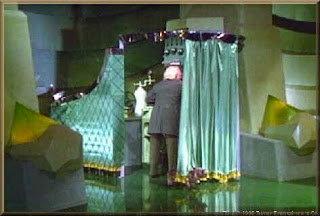 While I'm on the subject of movies, I also think of the Wizard Of Oz. Why? I remember, as a kid, being just as disappointed as Dorothy, the Lion, the Tin Man and the Scarecrow must have been when the little dog Toto pulled back the curtain to reveal an old man pulling the levers and knobs that operated the so-called Wizard of Oz. "Pay no attention to the man behind the curtain" he bellowed. But to no effect. The illusion had been dashed, the trick had been revealed.

vickilikesfrogs said…
The first time I saw Wizard of Oz, I was PISSED that the wizard wasn't real. NOW I'm pissed cuz someone as scuzzy-looking as Shauna Sands gets to afford all that plastic surgery IN ADDITION to getting to bop Lorenzo Lamas! Life is just not fair.

That's quite a set of ta-tas on that chick.

And it was an incredible let down finding out that the Wizard was just a white haired old guy.

nonamedufus said…
♥ Vicki ♥: I was so let down when the "Wizard" was revealed as some old fart that couldn't help Dorothy. But of course it was revealed that the whole thing was Dorothy's dream. I googled "revealing dress" and Shauna was the first thing to pop up. I'd never heard of her before this...honest.
22 September 2010 at 22:11

I was so let down about the wizard too. Kinda like Santa. (tears falling)

The Prestige was a pretty good movie. I bought it without any previews because of the cast. Good recommend!
23 September 2010 at 00:12

nonamedufus said…
MiMi: Thanks for the visit and the comment. Yeah, what else can you say about that dress?

For a kid the revelation that the Wizard was some old guy was such a bummer.

00dozo said…
"I googled "revealing dress" and Shauna was the first thing to pop up."

What was the second thing?
;-)

brookeamanda said…
I read a blogger who always refers to Shauna Sands as "The Empress of Lucite." I love that. I also agree that "The Prestige" is a GREAT movie with a very unexpected twist ending.
23 September 2010 at 11:06

nonamedufus said…
brookeamanda: That's an apt description for her.

Chris said…
Thanks you, Dufus.

That's all I have to say.

I was so let down about the wizard too. Kinda like Santa. (tears falling)

The Prestige was a pretty good movie. I bought it without any previews because of the cast. Good recommend!
12 May 2011 at 14:48

That's quite a set of ta-tas on that chick.

And it was an incredible let down finding out that the Wizard was just a white haired old guy.