Treasure of The Sierra Madre. A classic with Humphrey Bogart. I love this line!

Speaking of classics, there were many in our captions this week. It was really tough to choose one over the other.

For example, Whitey - you guys all remember Whitey, my brother - shot me with...


Thirty some years later, The Jackson's are No. 1 with a bullet again.

My pal Quirkyloon took it out of the holster this week and gave us...


Post Apocalyptic group, Earth, Wind and Gunfire hits number one song: We Are The World!


What Glenn Beck sees whenever President Obama is on TV

And Chris, our favourite Knucklehead rifled around a little before coming up with...


Ladies and Gentlemen, YOUR BOSTON CELTICS!

But the satirist of St. Catherines, Ontario Frank Lee Meidere blasted both barrels with his winning round... 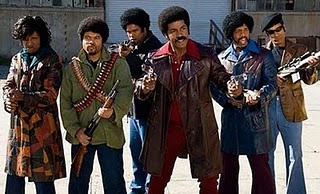 Directing under the name Isaac Washington (his iconic bartender character in "The Love Boat") Ted Lange has just released his cinematic reboot of "The Mod Squad."
Way to go Frank, you crazy Canuck. You be hangin' with dufus this week. And you get my stinkin' badges! 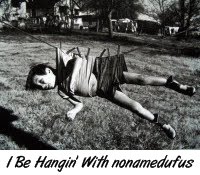 And congratulations and thanks to all who played. You're real "tough guys" from which to pick a winner. (Awkward, but it didn't end in a preposition!)

Donnie said…
Nice going Frank. Is that Richard Pryor second from right or did that guy just borrow his teeth?
25 September 2010 at 10:03

And congrats to the honourables.

Congrats to the "dere"! And thanks for the honorable mention.

Now I've got that earwom of a song stuck inside my head. I know, I know, I have only myself to blame.

Frank Lee MeiDere said…
I've been so out of touch I didn't even catch this. Thanks, John. The only complaint I have about hangin' with the dufus is that those damned clothes pegs really pinch. Next time I'll wear looser clothes, like you.
28 September 2010 at 12:04