September 20, 2010
Oh my! It's been revealed that American First Lady Michelle Obama may not be all too happy with her lot in life at 1600 Pennsylvania Avenue. According to an unauthorized biography of French First Lady - would that be premiere madam? - Carla Bruni-Sarkozy, Obama told her that life was hell in the White House. "I can't stand it," she reputedly said.

Both the White House and the French government are denying the remarks. The French Embassy says Ms Bruni-Sarkozy is distancing herself from the biography. 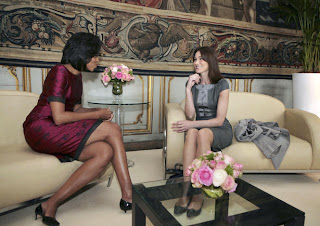 What's Mick Jagger really like?
It was just earlier this year that the French First Lady and her husband of a couple of years were in the news for each allegedly having affairs. This story too was vehemently denied.

I'm not sure if these stories are spread by media outlets after salacious stories and the facts be damned or by political rivals who would like nothing better than to see the downfall of current government leaders.

Or the stories may be true. After all, living in the White House drove Betty Ford to drink. And we all know where it drove Bill Clinton.

Here in Canada, the pecadilloes of politicians and their wives, if any, are seldom reported. Gosh we'd have to go back to the 70s when Prime Minister Trudeau's wife Margaret flew off to New York to dance the night away at Studio 54 with the Rolling Stones. (Hmm, Mick Jagger, eh? In this regard Carla Bruni may have more in common with Margaret Trudeau than Michelle Obama!)

I'm not saying things like this haven't happened since. Just, if these things have happened, the Canadian political media fails to report it.

And I'm not so sure I mind that. I'm of the view that if it isn't criminal what they do in their private life is their affair...so to speak. But what they do in public life better be above board because the people who voted for them expect it of them.

Donnie said…
I can't blame Michelle. After all, talking about how bad being obese is for you would get old in a hurry. Can't she come up with another "cause". Like house hunting?
20 September 2010 at 09:03

Anonymous said…
I would absolutely loathe living in the spotlight in this day age with Twitter and YouTube.

You can't hide behind appearances anymore.

MikeWJ at Too Many Mornings said…
I always wonder if these stories are true, made up, or even planted by savvy PR people. In this case, the flip side of Michelle's plight is that life in the White House is very hard on the family, arguably evoking public sympathy for president who's ratings are falling. Or, perhaps I ought to cancel my subscription to "Conspiracy Weekly." ;-)
20 September 2010 at 17:02

nonamedufus said…
Don: yeah, she could host HGTV's House Hunters! She'll need to find one herself soon if hubby doesn't win a second term.
20 September 2010 at 19:56

nonamedufus said…
Mike: You may have something there. I'd be interested in that subscription if you cancel it.
20 September 2010 at 19:58

http://howtobecomeacatladywithoutthecats.blogspot.com said…
Can you imagine not being able to bitch about things with anybody? That would be torture, indeed!
22 September 2010 at 07:17

Quirkyloon said…
I would absolutely loathe living in the spotlight in this day age with Twitter and YouTube.

You can't hide behind appearances anymore.