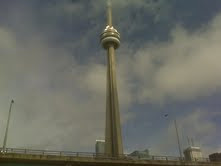 Remember this? A couple of months back I told you about my trip to *spits* Toronto to visit my brother, Whitey. This is the CN Tower, once the highest structure in the world until 2007. It's kinda like Toronto made a monument to itself, huh?
Well, a couple of weeks back Mrs. Dufus and I made a trip back to *spits* Toronto to visit Whitey in advance of his birthday, or as he likes to call it COTU*. He should know. He lives there.
You may ask yourself "Why does dufus drive to Toronto so often?" Or, you may not. Nevertheless we visit my brother Whitey so often because we read a recent survey that indicated Toronto is the most miserable city in the country. Heck, we feel bad for the guy and just wanna cheer the poor fella up.
We had a great weekend. I blew a small fortune in HMV on Yonge Street, a 3-storey CD store, and substantially enhanced my music collection.
We also spent some time in COTU's* historic Distillery District. Originally a distillery founded in 1832 by brothers-in-law William Gooderman and James Worts, by 1877 it was the world's largest distillery and manufactured Canadian rye whiskey, rum and other spirits.
The 13 acre site was restored in the early to mid 2000s and developed into a pedestrian only arts and cultural district.
The area is chock-full of bistros, restaurants, studios, galleries, shops and condos. We stopped into a cheese shop called "A Taste of Quebec". Being from Quebec, we just had to see how anything in COTU* could associate itself with anything from la belle province. We were pleasantly surprised and bought several great Quebec cheeses for dinner that night. The shop was attached to a gallery that displayed the work of Quebec artists. I loved a couple in particular, each costing about $8,000. I passed. Didn't spend nearly that much in the CD store later, which made Mrs. Dufus happy. They also had a small Group of Seven member A.Y. Jackson piece. It was selling for $150,000 if you're interested. 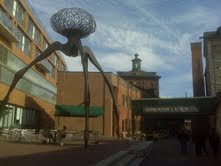 Outside we came across IT, a forty foot tall sculpture made of 12,000 pounds of steel and inspired by H.G. Wells' War of the Worlds. It was originally commissioned for Black Rock City, Nevada's 2006 Burning Man Festival.
Well, all our browsing made us hungry so we stopped in at the Pure Spirits Oyster House and Grill. Nice place. Good food and... 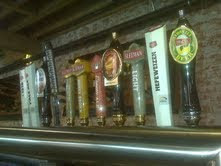 No problem. It was nice to know that if we drank too much it'd be easy to get a lift home. After a full afternoon of studio browsing, sipping beers and CD buying we retreated to Whitey's place for our daily happy-hour session. Hey, I said we were there to make him feel better. Aren't I a good brother.
*Centre Of The Universe

IWASNTBLOGGEDYESTERDAY said…
cheese for dinner? did it come with crackers ? lol

nonamedufus said…
IWBY: Actually the cheese was after dinner, with a baguette. We were trying to bring a little culture to COTU.
29 November 2010 at 07:46

Anonymous said…
It figures IT would be in COTU!

What a great bro you are! Cheese and beer. Wow. I'm sure you had some stellar breath after that.

And I wish we IT here in the Phoenix area. Oh, the horror stories I could torture my boys with that one! "Look! I told you the aliens came!"

nonamedufus said…
Quirks: Hey this is real Quebec gourmet cheese. None of that Kraft processed stuff, ya know. And the beer was that chic imported cerveza from Mexico. You make it all sound so cheap and tawdry. Well, after a couple of days of happy hours it felt a little like that but, hey, we had to lift our spirits (ha, ha, get it?) Cheers.
29 November 2010 at 10:48

http://howtobecomeacatladywithoutthecats.blogspot.com said…
Even if Toronto isn't really COTU, it sounds like you still managed to enjoy yourself!
29 November 2010 at 12:10

nonamedufus said…
Boom Boom: COTU or not, having a good time was certainly the COOA! (centre of our attentions)
29 November 2010 at 12:38

00dozo said…
Oh, woe are we who were born in the COTU. You'd think we would be omnipotent.
;-)

Ziva said…
Cheese for dinner, a giant phallus, insanely expensive art, IT... No wonder people are miserable in *spits* Toronto.
29 November 2010 at 15:56

nonamedufus said…
Ziva: I couldn't have said it better myself. Wait a minute. I think I did. I wonder if glogg would make a difference?
29 November 2010 at 16:01

Ziva said…
Glögg makes everything better. And even if it doesn't, at least you won't remember what drove you to drink when you wake up in the morning. (Just don't look out the window lest you see the giant phallus.)
29 November 2010 at 16:09

nonamedufus said…
Ziva: I think you've just provided me with the secret to a pleasant visit to COTU. Enough glogg and I'll forget I was even there!
29 November 2010 at 16:55

Linda Medrano said…
Actually, it sounds pretty nice in "spits" Toronto. I've never been there and would like to go. The only Canada I've seen is Victoria!
29 November 2010 at 17:50

nonamedufus said…
Linda: Victoria's gorgeous! And there are no phallic towers there.
29 November 2010 at 18:11

Nicky said…
Ok, seriously? Sherbrooke is the happiest place in all of Canada?! I've been to Sherbrooke and Disney World, it ain't! Not that it's awful, but seriously?
29 November 2010 at 19:27

nonamedufus said…
Nicky: Considering Premier Jean Charest's from Sherbrooke you kinda wonder why it's residents are so damn happy. Must be something in the drinking water.
29 November 2010 at 20:54

Whitey said…
I woke up this morning and it was spitting outside. Seems to happen every time you write about Toronto. Damn you, Saliva Man. Damn you to Hull.
30 November 2010 at 09:35

nonamedufus said…
Whitey: I was wondering when you'd stop by. Hey, you're a pretty funny guy for someone that's supposed to be so miserable.
30 November 2010 at 10:53

Jen said…
You and your brother spelled center wrong.

nonamedufus said…
Jen: That's just how we spell centre up here. Spell-check wouldn't have it any other way. We're always ahead of things up here. That's why we spit before we say Toronto, or as residents say it "Trawnta", instead of after.
30 November 2010 at 12:20

Frank Lee MeiDere said…
We may not be the most loved place in Canada, but at least Toronto is no Wullerton (spits).
30 November 2010 at 13:21

nonamedufus said…
Frank: Ha! That's exactly where I got it from. *Spits* Toronto is to Ottawa as Wullerton *spits* is to Dog River! Of course, only our Canadian friends will get this one.
30 November 2010 at 13:40

MikeWJ at Too Many Mornings said…
I'm glad you had a good time in *spits* Toronto, but I'm shocked to learn that you bought CDs! Who buys CDs these days? Either you buy your music on iTunes, or you download it illegally. Step into the now, NoName! ;-)
30 November 2010 at 15:53

nonamedufus said…
Mike: Gee, and I thought I'd come a long way since my vinyl days. Don't you like to actually have something in your hand and to be able to read the liner notes?
30 November 2010 at 15:59

IWASNTBLOGGEDYESTERDAY said…
cheese for dinner? did it come with crackers ? lol