Things That Go Ding Dong In The Night 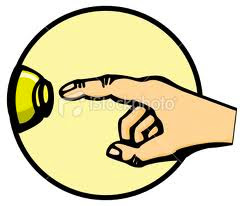 There's something quite odd going on in our house. A couple of weeks ago Mrs. Dufus and I were parked in front of the television. We'd just settled in for the next instalment of The Amazing Race, at 8pm, when the doorbell rang. My wife got up to see who was at the door, she being closer. When she opened the door no one was there.

Odd. No. One. There. Was someone playing a trick on us? A little past Halloween, you know. Hmm.

Several nights later the wife and I had assumed our positions...in front of the television. We'd just started watching the 10pm news when ding dong. "Who the hell's at the door at this time of night?" I barked and this time I went to the door. There wasn't a soul in sight. Hmm.

The odd thing about this is we have security lights outside on motion detectors. Each time all was dark. Hmm.

The other morning at 5:30am I was awakened by...you got it...the doorbell. Now our doorbell doesn't just go ding dong. Oh, no, we had to set it to the tune Big Ben makes on the hour. You know: ding ding ding dong, ding ding ding dong. This can be pretty annoying when there actually are people at the door. More so at 5:30 in the morning when no one's there.

So we would seem to have some phantom modern-day Hunchback of Notre Dame.

Or maybe there's some kind of short in the system. But then it's wireless and runs on batteries.

Or maybe the racoons are paying us back for tying down the lid on the recycling bin.

But I guess you've gotta look on the bright side in all of this. At least there wasn't a flaming bag of crap on the doorstep.

Anonymous said…
I think you need to retune the doorbell to ring:

"Who's that knocking at my door?"

I think you've got a gremlin. You gave it water after midnight, didn't you?

nonamedufus said…
It must have rung 4 or 5 times Saturday night. Finally when it went off at 2:30am I got up and ripped out the batteries. Quiet around here now.
22 November 2010 at 11:05

Maybe the batteries were low. My smoke alarms beep when the battery gets low. Or maybe it was a ghost.
22 November 2010 at 11:27

And, before you ask, I haven't read the book - yet.

Linda Medrano said…
You don't need a damn doorbell. I don't have one. The dogs tell me if somebody is out there. And I don't usually answer it unless I know somebody is coming. If I don't know they are coming, why would I open the door to them. If I invited them, fine. I'm waiting for them. I think you should just forget about the doorbell altogether because that would annoy the hell out of me.
22 November 2010 at 18:08

Bluezy said…
I would look into the paranormal, but either way you should web cam your doorway and then share with us your findings.
23 November 2010 at 04:31

IWASNTBLOGGEDYESTERDAY said…
at least its not charge of the light brigade at 5.30 am

nonamedufus said…
IWBY: Welcome, first-time commenter! Wow, you've really thought this through. I'll start with new batteries and go from there... Might be a tad cheaper.
24 November 2010 at 09:49

Quirkyloon said…
I think you need to retune the doorbell to ring:

"Who's that knocking at my door?"

I think you've got a gremlin. You gave it water after midnight, didn't you?