Is That A Bomb In Your Junk Or Are You Just Glad To See Me?

November 18, 2010
You know there was a time when a guy would use a public toilet and didn't need to worry about having something to read. Nope. That's because the crapper stall wall was full of graffiti - enough to last the duration of your stay. I don't know why but my favourite was always something along the lines of "For a good time, call Bob's Mom at...". Ha, ha, I knew all my buddies' moms I didn't see any of them as providing me with a "good time".

But times change. There's less graffiti on the bathroom wall these days but there's more outside the bathroom for a guy to worry about. Take for instance the latest dust up around the approach being taken by TSA agents (Transportation Security Administration) in the States. Or maybe I should say the latest feel up.
I guess the terrorists have won. TSA agents are stepping up their efforts to protect the flying public. They now use x-ray machines that show so much you might as well strip down to pass through security checkpoints. Hardly surprising a guy might think he's trying out for a centre spread in Playgirl Magazine. 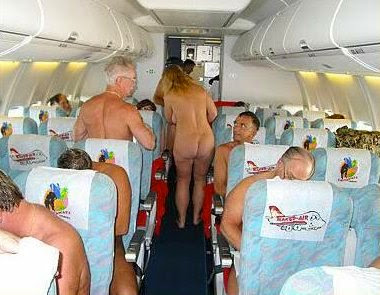 "Is it me or was that security check more thorough than usual?"
But that's not the worst of it. If you refuse the x-ray or if the agent determines it wasn't revealing enough, then you're going to be subjected to a pat down. From all accounts the pat down is fairly invasive. One guy was quoted widely as saying "If you touch my junk, I'm gonna sue you."
Then, of course, there may be flight delays because of this new procedure. Not because it slows things down in and of itself. Rather, some guys might enjoy it so much they may rush to the back of the line to subject themselves to being groped all over again. Hey, for some guys it may be the most romance they've experienced in months. 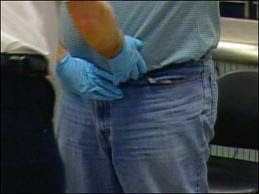 This man aroused...suspicion.
But there may be a downside to the TSA arousing such a reaction among the traveling public. I can see washroom attendants spending more time cleaning the graffiti in the airport facilities in the future. Scrubbing madly to remove such messages as "For a good time, call TSA agent #74 @ LAX".

I worry a lot about this airport scanning bidness.

I get scanned all the time for medical procedures and have endured that embarrassment, but I have relied upon HIPPA practices, which is the medical community "solemn promise" that they can't talk about patients (and hopefully, what they see).

I'm thinking there won't be any HIPPA practices at the airports, but HIPPO. As in seeing ginormous hips being scanned.

nonamedufus said…
Quirks: In all seriousness this is getting out of hand. People are suing the TSA for groping a little too much. Did you see the video of the hysterical 3 year old girl yelling "don't touch me"? This gives new meaning to fly the "friendly" skies. They'd better not get overly friendly with me.
18 November 2010 at 10:09

Unfinished Rambler said…
I love how you brought the post back around to the graffiti. Nice to see the art of closure isn't dead.

Best photo I've seen in a post in a while, the one of the naked passengers. The most disturbing thing about that: all the...ahem...older gentlemen in the photo and how the one guy is purposefully maintaining eye contact with the other guy while he's standing up...um...projecting himself. Well, I imagine anyway...ew, shudder, no, I don't imagine.
18 November 2010 at 10:24

Shieldmaiden96 said…
I've heard stories about these nudist airlines, and I have questions.
One-- are you obligated to board with a towel? I am not judging someone who wants to be a nudist, but I don't necessarily want to share a seat with someone else's buttcrack sweat and possibly devil- may-care hygiene.
Two-- do they serve coffee?
I know flight attendants are seasoned drink-delivery professionals, but I would definitely want the window seat so I don't have TWO steaming hot cups of joe passed across my unprotected naughtybits.
18 November 2010 at 10:40

Anonymous said…
We're travelling south next month and I am sooooo not looking forward to these new scans. - G
18 November 2010 at 10:44

nonamedufus said…
UR: I'll let you in on a secret. I had the concluding paragraph in my head when I started, hence that's why I started that way.

The thing about that photo I couldn't figure out was apart from those two guys and the lady in the aisle, why is everyone else looking in their laps?
18 November 2010 at 11:51

nonamedufus said…
Shieldmaiden: Believe me, I share your concerns. You enver know where that seat's been before. Eww.
18 November 2010 at 11:54

http://howtobecomeacatladywithoutthecats.blogspot.com said…
Ha! Putting the TSA badge numbers on the bathroom walls may be just the thing to make them think twice about this new system!
18 November 2010 at 13:30

Ziva said…
I hate those body scanners. Privacy is a forgotten concept in today's world. And I don't think it's a coincidence that right after the USA, South Korea is the country with the highest number of full body scanners.
18 November 2010 at 15:02

nonamedufus said…
Rachele: Don't you think this has gone just a little too far? Anyone else that patted down little boys would be locked up...or a Michael Jackson impersonator.
18 November 2010 at 17:12

nonamedufus said…
Ziva: Your point? Because they make them, like they make everything else in the world?
18 November 2010 at 17:15

Linda Medrano said…
I think the government should start doing "strip searches" at the Mall too, particularly over the holidays. One, terrorists could attack there too, Two, it would give out of work people jobs, and Three, it could cut down on shoplifting.
18 November 2010 at 17:48

Ziva said…
Well that too. But mostly they're so close to North Korea that they're quite possibly the only nation in the world as paranoid as the US. I know I'd be paranoid if I had North Korea living next door. Or Russia, that would be pretty bad, too.
18 November 2010 at 18:01

Nanny Goats In Panties said…
The only problem I have with this aside from ALL OF IT is that fact that TSA is a bunch of government thugs and idiots who have already gotten in trouble for giggling and talking smack about everyone and their stuff and now they want to add something this private to their duties? No thanks. I'm not sure I want to travel any more at all because of this.
18 November 2010 at 18:31

Nicky said…
Um, why were they patting down a 3 year old? What did they think she was hiding? Seems to me that people who would try to pat down a 3 year old do not need more "tools" to further abuse their questionable powers.
18 November 2010 at 19:59

nonamedufus said…
NGIP: It's the same in Canada. How can government's put "security" in these people's hands. It's way above their pay grade. Although I suppose getting frisky is a workplace benefit.
18 November 2010 at 21:50

nonamedufus said…
Nicky: Isn't that crazy. Little kids are taught that it's wrong to be touched. No wonder she freaked out.
18 November 2010 at 21:52

Shieldmaiden96 said…
I've heard stories about these nudist airlines, and I have questions.
One-- are you obligated to board with a towel? I am not judging someone who wants to be a nudist, but I don't necessarily want to share a seat with someone else's buttcrack sweat and possibly devil- may-care hygiene.
Two-- do they serve coffee?
I know flight attendants are seasoned drink-delivery professionals, but I would definitely want the window seat so I don't have TWO steaming hot cups of joe passed across my unprotected naughtybits.
12 May 2011 at 15:02