November 16, 2009
Well, this is my 5th week of chemo and my 2nd periodic update. Chemo consists of 5 decadron pills and 10 procytox pills - the toxic twins - every Monday morning. In my first go-round with the beast 2 years ago my chemotherapy was intravenous. The pills are more convenient - no weekly trips to the hospital - but they're no less effective.

And the treatment brings with it the same wonderful side effects. The biggest side effect is lack of energy. The couch and I have a most intimate relationship these days and are on a first-name basis. The second is insomnia, particularly the first 2-3 nights after chemo. Hello, again, couch. I'd have to say the third effect is an increased appetite but that's neutralized by a distinct lack of taste. As in tasting food - I still can't dress myself appropriately. And finally, I notice a diminished ability to focus over an extended period of time. Wha? What was I just saying? 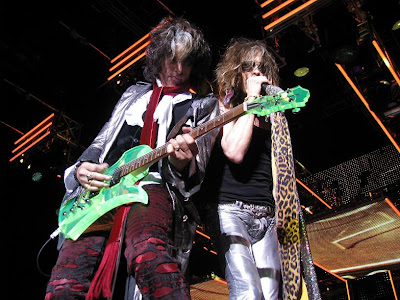 The other Toxic Twins

Before I zone out completely, did you hear about the guy who hand't been feeling well so he decided to see his doctor. The doctor examined him and referred him to the hospital to see various specialists. After a couple of weeks, all the test results came through, so the guy returned to see his doctor.

"Tell me the worst."

"I'll be honest, you have cancer, you'll be dead in three months."

"You also have Alzheimer's Disease."

"Alzheimer's? Oh well, at least I don't have cancer."

I know you may not be feeling well (hugs) but let's leave my favorite toxic twins alone!

I can't believe Stevie-poo has left! He's gotta get back with the band.

It ain't Aerosmith without Steven Tyler AND Joe Perry.


GUYS! You've made millions TOGETHER!

Make some more money, k? (TOGETHER)

Seriously, Noname, I feel for ya Dude! Chemo is NOT fun, but I like that you can laugh about it.

{hugs} And be nice to the couch!

nonamedufus said…
Quirks: Thanks for the positive thoughts. The last I read was that Tyler say's he not quitting Aerosmith. Can you say "hype"? Sheesh, he's rock's answer to bubble boy.
16 November 2009 at 10:12

Moooooog35 said…
Let me know if you need any painkillers.

I have a ton left over from my vasectomy, shoulder and hand surgeries and have a pretty good meth lab going in my...

nonamedufus said…
moooooog: I'll be sure and let you know.

Unknown said…
Love your sense of humor. When my mom was sick, I would joke that I would get cancer from her side of the family and alzihemers from my Dad's side. I would then forget I had cancer.

Donnie said…
Best of luck with the chemo. I hope I don't ever find out first hand about it, but one never knows...
Anyway, I hope that your Tuesday is much better than today for you.
16 November 2009 at 16:13

Me-Me King said…
Speaking of Old Timer's Disease...I was here earlier and forgot to leave a comment. I think the world has tipped on it's axis or something. Nothing is going right today. It is Monday, right?

nonamedufus said…
Don: Tuesday & Wednesday are probably the worst. do the drugs on Monday so I can have a decent long-weekend.
16 November 2009 at 17:10

nonamedufus said…
Me-Me: And you think you're spaced-out?

MikeWJ at Too Many Mornings said…
Noname, I had no idea you had cancer. How did I miss this news (I've been following you for a while now)? I'm sorry, and I'm sorry that you have take those nasty pills. Losing your taste sucks, especially if you're still hungry. That would be like trying to have sex without getting an erection, or having sex without reaching orgasm. Not that either one's ever happened to me, I swear. I'm just imagining what it would be like, that's all. And now I'm off to do some Noname back reading, to catch up on what I've apparently missed.
16 November 2009 at 18:22

ReformingGeek said…
Wow! Hang in there!

Gianetta said…
Tyler prolly needed to get some Botox injections to keep his lips at optimum pout level.
16 November 2009 at 21:06