No Injustice Too Small

That's right folks. nonamedufus prides himself in routing out injustice everywhere, exposing it, and crushing it beneath the toes of his goose-stepping, hobnailed, steel-toed boots. This month is "anti-injustice" month at Humor Bloggers Dot "I Could Care Less". We do things a little different over there and that's exactly what I intend to do today. Let's see if you can care...a little.
Today I want to do justice to an injustice near and dear to my heart...and expose the exploitation of the lowly pun. Puns have never done anything to us, so why do we exploit them as we go for the cheap laugh, making them feeling tawdry and dirty. Oh, because it's so hard for humour addicts to resist a snicker, chuckle, snort or guffaw. Let me show you what I mean. And I'll identify the puns. Think of it as the literary equivalent of a short electric shock.
Once upon a time in a little village lived a dwarf. (Okay, in retrospect, now that you know my missive's main character, little - YOW-ZA!!! - in the first paragraph, lowly - AYE-YIYE - and short - OW! - in the second paragraph and little - ouch, ouch - in the last sentence qualify as puns.) Small in stature, he nevertheless loomed large in the world of sports. He was a golden glove shortstop for the village's midget baseball league. He took short shifts on defence for the village's minor hockey team. And he fancied himself a football player in the village's (wait for it) pee wee league *rimshot*. 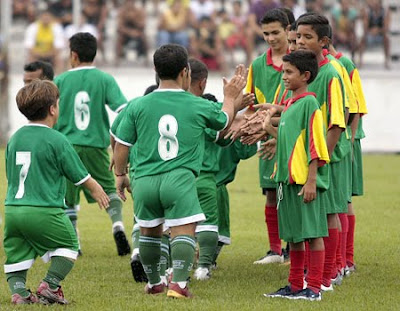 "Anyone for a little soccer?"
Our dwarf's name was Tiny Tim, a nickname he had acquired not from his parents at birth because of his stature, but rather from the ladies for his pint-sized nose. (What'd you think I was gonna do, here, make some small joke?) One day Tiny met a young girl, normal in every way, and he fell madly in love. You might say he really looked up to her. And he worshipped the ground she walked on because that's about all he could see at eye-level!
One evening, after a short discussion the two decided to go out for dinner. Even though Tiny had expressed reservations about the restaurant (Okay that's a half electric shot. It's a pun but not germane to the story...or gardenia either) called Dopey's Little Rib Roast (oh, bonus!). When they arrived Tiny felt immediately ill at ease. While there was no dress code at Dopey's the maitre di nevertheless seemed to be looking down his nose at him. It kind of caught him up short. Once seated at their table he felt better. The waiter handed him the menu - he had too, Tiny's arms weren't long enough to grab it. Tiny's date was thirsty and she ordered a little cocktail...the kind you drink. If she played her cards right she might get the other one later that evening. (bonus points! - a pun and a double entendre!!!)
The meal passed without incident until dessert when Tiny order Strawberry Shortcake and the waiter burst into small gales of laughter. Tiny took offence because Small Gale was his ex-wife and he certainly didn't need to be reminded of her at this point. Unknown to Tiny his date had short-term memory and at this juncture ordered another cocktail. She was just a little tipsy at the end of the evening, but she was mobile and was able to stay on her feet as long as she took baby steps. This was fine with Tiny as it was about as fast as he could walk.
Back at his place he put on a little (sorry unintentional) mood music - his favourite song - Do a Little Dance, Make a Little Love, Get Down Tonight. And as they baby-stepped closer and closer to the bedroom he realized he didn't even know her name. As if reading his mind she whispered into his ear - no easy trick without almost going down on him - "Why it's Midge. It must have been obvious."
And folks, to quote Tiny Tim, that's my little tale. (Imagine that last line was spoken and you'll never notice the wee spelling mistake.

http://howtobecomeacatladywithoutthecats.blogspot.com said…
I just wanted to let you know how much my Li'l People from Jules enjoyed this post. It has given them renewed energy to fight against injustice wherever they might find it. Up with the Li'l People!
6 November 2009 at 08:07

I really cracked up (a little?) at the "bonus points: pun and double entendre!"

Good work Noname. With you behind the little people, they'll be getting NO where fast!

nonamedufus said…
Quirks: Just trying to pick up where Snow White left off.
6 November 2009 at 12:32

nonamedufus said…
Me-Me: Hmm...I'm thinking of trying to convince the Food Network of my idea for "Dining Out With Dwarfs".
6 November 2009 at 12:36

Donnie said…
As I've mentioned before, I consider you the Prince of Pun! That posts shows why. Nicely done and not a bit too short either. Hell, I tried...
6 November 2009 at 17:32

nonamedufus said…
Don: Thanks, man. I've pretty much used every synonym I can think of in that post. Afraid in response to your comment I've come up short.
6 November 2009 at 18:05

I really cracked up (a little?) at the "bonus points: pun and double entendre!"

Good work Noname. With you behind the little people, they'll be getting NO where fast!