Rise up brothers and sisters. Gather round and hold my hand as we pray to the Lord above in an effort to rid the world of a terrible injustice against us all. You heard me: "an injustice". Yep, November is "Anti-Injustice month, where couch activists like me at Humor Bloggers Dot actus reus are taking a stand - 'cause Party Palace Rentals repossessed their chairs - against injustice. I have undertaken to play my small part in this crusade. Yes, that's right. Follow along, if I haven't lost you already, as I raise my hand, er, ah voice against the heinous injustice of racism.
The Americans have conquered racism. You rarely hear a disparaging word about African Americans. You rarely hear a word at all other than in a sports context. Thank God for Mexicans - but if they know what's good for them they better hurry up and learn how to play football.
In Canada we've conquered the French. Oops, Freudian slip. I meant we've conquered racism. Descendants of our two founding-nations live in peace and harmony *strains of Koombyah in the background* save of course what goes on between the fans of the Montreal Canadiens and the rest of the country. Maybe the Habs could draft some Mexicans! They can't play any worse.
And yet racism continues to rear it's ugly head...literally. Yes, that's right. People are slighting chia. Say what? Yeah, I said chia, with a capital C and that spells trouble right here in River City. Sorry, wrong injustice. Here take a look at what I mean.
The Chia Pet started life innocently enough, minding it's own business...and then things got nasty. 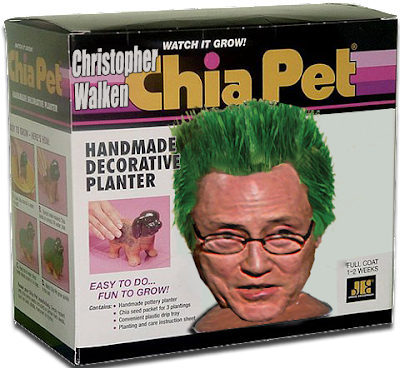 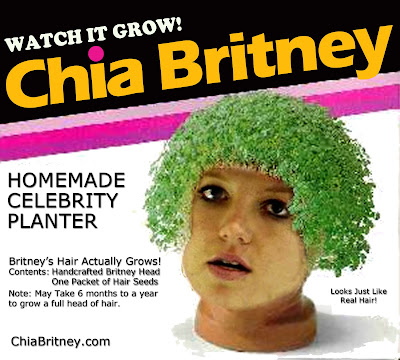 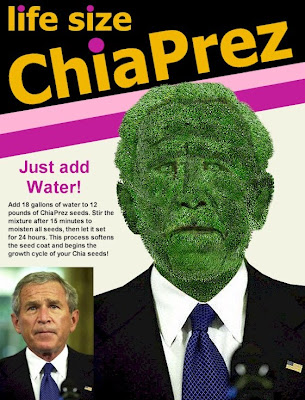 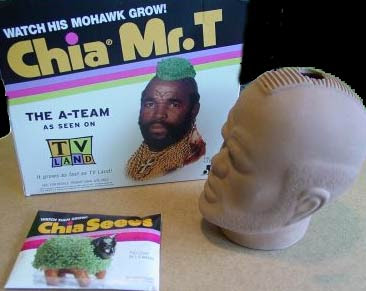 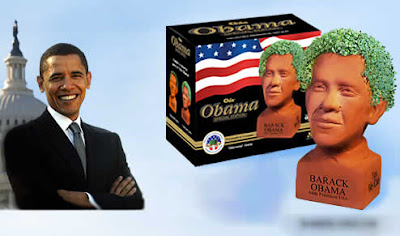 Ow-chia-wow-wah, the rest I can understand, but just when you thought Obama had thought he had put the worst of his critics behind him...bam...Chia you can believe in!
***
Actually, now that I've re-read this little post I wonder if I should order a bunch of bags of chia seeds. They might come in handy during chemo!

Me-Me King said…
When I got to the Christopher Walken Chia Pet, I friggin' lost it! Then I thought of the line from True Romance where Dennis Hopper says to Walken, "Salcilians were spawned from.....chias." Then, of course, Walken blows Hopper's head off.

nonamedufus said…
Me-Me: Two of my favourite actors! Blew his head off? Totally in keeping with my theme.
3 November 2009 at 07:32

nonamedufus said…
moooooog: Yeah, I couldn't show that one, although lots of people have already seen it.
3 November 2009 at 08:48

Donnie said…
I used to give Chia Pets as gifts. They were supposed to have been gag gifts. Unfortunately, one of the recipients really liked it (dumb blond), and the other thought it an insult and never spoke to me again. Double fail!
3 November 2009 at 16:21

Anonymous said…
And where is the chia zombie?

http://howtobecomeacatladywithoutthecats.blogspot.com said…
I want my nonamedufus chia pet! I demand one now... because I want to fight racism by supporting our Canadian neighbors to the north.

MikeWJ at Too Many Mornings said…
Hey, there's no racism in Canada. You forgot about Scott Gomez playing for the Montreal Canadiens. So, see, it's not all about the white guys up there. Now if they can just get a hockey chia pet going.
3 November 2009 at 19:26

nonamedufus said…
MikeWJ: Hey what do you think the CH on Montreal's sweaters stand for? CHia!
3 November 2009 at 19:50

Steelneal1 said…
i think the President Obama one looks like republicsn Sen Dick Lugar from indiana..
14 December 2012 at 00:40