That's it. I've had it. That's the last god damned injustice I'll have to suffer through.
Ha, ha, ha...literally.
Throughout November's 30 days, the folks over at Humor Bloggers Dot Com, or who I sometimes like to call Huggy Bloggers Not Calm - among other things, have been running with the theme of injustice.
30 days! A whole month! 1/12th of a year! You think we get the point? Okay, okay, there's a lot of injustice out there. And nobody cares enough to do anything about it. Except a bunch of snivelling, snot-nosed, punch-line deprived humour bloggers (hey, I'm Canadian. I spell humour with a "u". Get over it. Don't get me going on THAT injustice.).
So like a dutiful member of this comedic cabal I've been writing a couple of posts a week about various injustices. 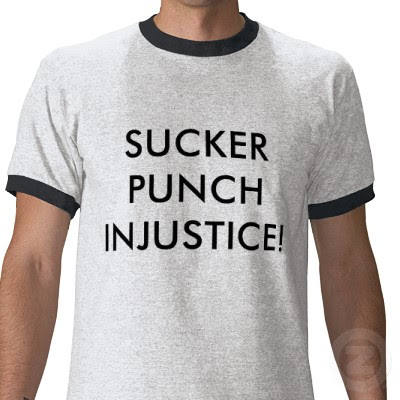 For example, November 3rd, I took racism head-on.
A few days later, on November 6th, I did another little story on injustice. I think it really measured up.
Then on November 9th I talked about a variety of injustices including an ever-growing problem.
Then, November 10th I took aim at a particular injustice. But I really wanted to get into this topic. You might say I chose it by design.
A few days later, on November 17th, I was back at it again, ranting and raving with my finger on the pulse... of yet another injustice. That's right. ANOTHER injustice.
But wait. I didn't stop there. Nooooo. On November 19th I really contributed to my developing oeuvre and came up with a piece that was perfect as a picture.
I was still hungry to combat injustice November 20th and went quick to the task as I thought it was appropriate to continue to raise awareness.
And then finally, my musings on injustice came to a dramatic conclusion November 24th.
Or so I thought. Silly me. I didn't realize this week still had a day from November for the month to run it's course. After 8 posts over 4 weeks about injustice I had certainly had enough. But noooooo.
Damn it.
November isn't over.
Now THAT's an injustice.
Hopefully, the last injustice.

http://howtobecomeacatladywithoutthecats.blogspot.com said…
That's you, Dufus... fighting injustice at all costs. We shall always remember your noble contributions. Fight on, Oh Canadian Hero!
30 November 2009 at 08:08

nonamedufus said…
Me-Me: Hey it's like the first one in line at the beauty parlour said: the early bird gets the perm.

I read MeMe's blog first, so I'm already aware of the drama going on.

And yes it is DRAMA.

nonamedufus said…
Quirks: What until tomorrow, when I take a poke at my Arizona amigos. You think I was sly today?
30 November 2009 at 14:46

Anonymous said…
I'd hate to be injustice. That'd be a bit coldforme. Not that it isn't getting a little nipply'roundhere lately...

Unfinished Rambler said…
You put the rest of us over at Humorbloggers dot com to shame with your injustice posts last month. That's an INJUSTICE, I tell you, when nonamedufus puts the rest of us to shame. ;)
3 December 2009 at 08:06

the CWI's are at full mast.

nonamedufus said…
Me-Me: Hey it's like the first one in line at the beauty parlour said: the early bird gets the perm.

I read MeMe's blog first, so I'm already aware of the drama going on.

And yes it is DRAMA.

Anonymous said…
I'd hate to be injustice. That'd be a bit coldforme. Not that it isn't getting a little nipply'roundhere lately...