Up In The Air

October 01, 2009
As I got to thinking about this Thursday's theme I realized I've often witnessed or experienced "flight". So I took a quick trip through my photo archives and came up with the following examples...

In the summer of 2008 we visited my wife's relatives in Kelowna, British Columbia. It was a rainy day on our flight out. Here's a couple of planes waiting to take off from Vancouver. 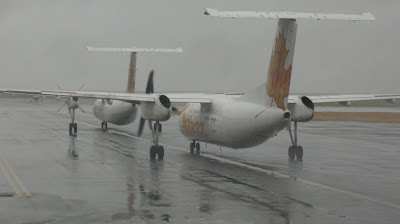 In Kelowna my brother-in-law took us out in his boat. His son flew through the air as he jumped in the lake. 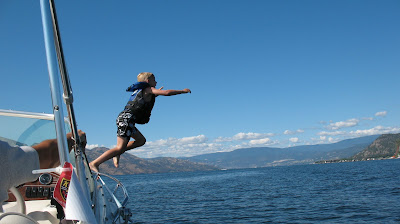 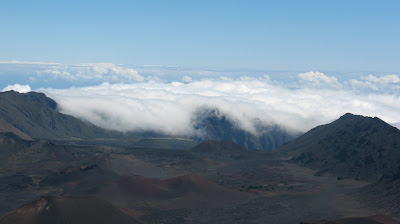 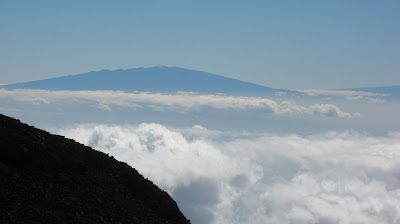 A little closer to home, we had a couple of visitors in our pool last spring prior to swimming season for a couple of weeks. Then they took off. 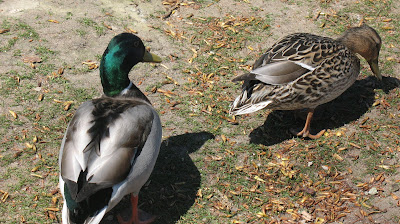 And finally, Labour Day weekend I took my wife hot-air ballooning for her birthday. It was the most amazing hour and-a-half we'd ever spent. 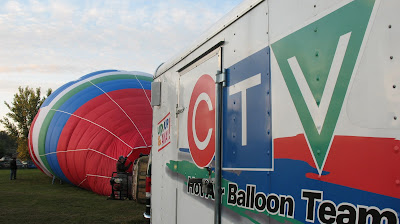 The balloon was sponsored by the CTV television network. Following our adventure I submitted one of my photos to CBC Newsworld's News Morning and they used it as their photo of the day. So we started our adventure with one TV network and finished with another! 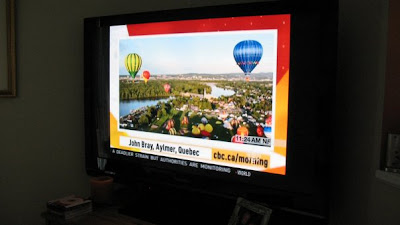 Here's a couple more pictures. In the words of Joe Cocker, we were up where we belonged. 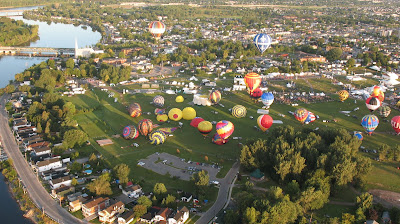 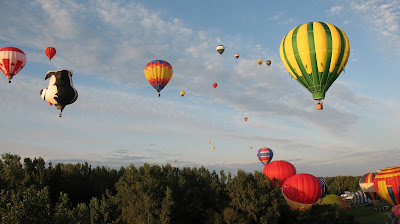 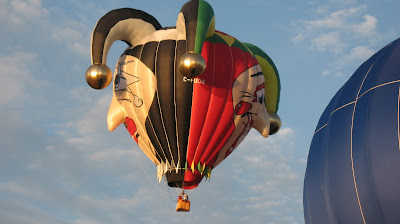 And for my pals at Humor Bloggers Dot Com, I always thought Chester was full of hot air!
*
For more "flighty" submissions drop by Theme Thursday

http://howtobecomeacatladywithoutthecats.blogspot.com said…
Great way to illustrate today's theme! I'm so jealous because I've always wanted to go up in a hot air balloon.
1 October 2009 at 08:35

moooooog: You must be a real joy on the trampoline.

Brian Miller said…
my boys love the balloons and watching them float over the house each year...have never been up in one though...there is a sign nearby advertising rides...perhaps we may try. happy tt!
1 October 2009 at 10:26

nonamedufus said…
Brian: We were really lucky to be part of the annual balloon festival. Our ride was cancelled the week before due to bad weather so we were re-scheduled on the date of the festival. Quite cool.

Ed said…
I almost did a post on hot air ballooning too. It's amazing. The last one I did was over the Serengetti in Africa; got to watch lions and elephants from above. Truly one of the most incredible experiences one can take in. Good choice for TT!
1 October 2009 at 12:23

AngelMay said…
The photos of the hot-air balloons were wonderful! Just wonderful!
1 October 2009 at 12:29

MikeWJ at Too Many Mornings said…
NoName, this is weird, because I mentioned flying today, too. *insert creepy Alfred Hitchcock music here* Those balloon shots are amazing, and what's even more amazing is that you got them on a competing network.
1 October 2009 at 13:40

nonamedufus said…
Wings: How appropriate you would flit from site to site today!

VE: I have a friend who ballooned over the Serengetti. She crashed and had a few anxious moments with those lions and elephants. Must be quite an experience.

AngelMay: I took close to 200 pics that morning. It was fantastic.

e: Thanks, we really enjoyed ourselves.

Donnie said…
Gorgeous pictures! I remember the Labor Day ballooning adventure, but what's with your name pasted across the bottom of the flat panel t.v.? Are you famous? Should I get your autograph?
1 October 2009 at 14:27

nonamedufus said…
Don: Yeah I know CBC outed me. I had to give them my real name to submit the pic that was broadcast across the country!
1 October 2009 at 15:00

Me-Me King said…
Theme Thursday? Do you all get together and decide on a topic? I just left "Skip's Stuff" and he's flyin' high too. The things you miss when you're away for awhile.

Anyway, I love, love, love the hot air balloon photos. This is another item on my bucket list, although I think I'll go for the tethered ride.
1 October 2009 at 15:08

Baino said…
Excellent photos but those planes, that rain . . I'd be wetting myself. The balloons are marvellous. So many. I get the odd one floating over the roof in summer very early in the morning!
1 October 2009 at 16:02

nonamedufus said…
Me-Me: That's exactly what it was: a bucket list experience! I discovered http://themethursday.blogspot.com/ (hyper link at end of post)through VE a while back and have been participating ever since.

Baino: Yeah the rain on our take-off was a little unnerving. On the balloons, ours was one of 80 entered in the local annual balloon festival.
1 October 2009 at 16:18

ReformingGeek said…
Nice photos! I love the Maui shots. You got a great view of the Big Island!

Chris said…
Never had the gumption to go up in a balloon. Maybe someday, when I don't care if I die.

Dakota Bear said…
Wonderful pictures. I really like the one of the Jester balloon.
1 October 2009 at 22:30

nonamedufus said…
RG: The air was a little thin on that Maui mountain top.

DK: You'd love it. Beats bungee jumping. That I'd never do.

Anonymous said…
noname, good take and awesome snaps! I was once on a balloon chase team. Didn't get to fly but ended up travelling over 400 miles to catch ours! Fun!
2 October 2009 at 07:09

nonamedufus said…
subby: Neat. Our pilot was in constant contact with his chase team and they were waiting for us when we landed.
2 October 2009 at 07:36

Anonymous said…
Cool! Our first run was post-poned due to the high winds but it calmed down enough, by the next day. One of these days I'll have to go up in one ;)
2 October 2009 at 08:31

Dreamhaven said…
wonderful photos. Not sure if I could get up the nerve to go up in a balloon. Happy TT
2 October 2009 at 10:28

nonamedufus said…
subby & Dreamhaven: Not to put you guys off but there were 9 other people in the balloon basket with us and yet we managed to soar to 1200 feet. It was an experience I'll never forget.
2 October 2009 at 17:57

Megan said…
I don't think I could get on a plane that small when it was raining.

But I'd love go to up in a balloon.

nonamedufus said…
Megan: I've been on smaller but that day our plane was larger than those two. Oh yeah we were estremely lucky to be rescheduled to the weekend with the festival.
2 October 2009 at 19:24

Megan said…
I don't think I could get on a plane that small when it was raining.

But I'd love go to up in a balloon.

DK @ Knucklehead! said…
Never had the gumption to go up in a balloon. Maybe someday, when I don't care if I die.

nonamedufus said…
Wings: How appropriate you would flit from site to site today!

VE: I have a friend who ballooned over the Serengetti. She crashed and had a few anxious moments with those lions and elephants. Must be quite an experience.

AngelMay: I took close to 200 pics that morning. It was fantastic.

e: Thanks, we really enjoyed ourselves.