October 30, 2009
We are much alike, Americans and Canadians. We may have different political systems but they are both democracies. And those democracies are both headed by elected leaders each of whom are concerned about the image of their government held "by the people". And yet, we are different.
Like Jackson and McCartney our leaders are black and white. One's a liberal, the other a conservative. One is preoccupied with how the media treats him and the other could care less...or so he says.
Governments have a love-hate relationship with the media at the best of times. Before they're elected, governments court the media in the hopes of obtaining positive and favourable coverage. After the election it usually doesn't take long for the relationship to change. All of a sudden the government is wary of the media. It's like they've turned out the lights and they're waiting for them to egg their front windows on Halloween. Let me give you an example.
In the States, much has been made of the ostracization of Fox News by the White House. The president's communications director says Fox is less a news organization and more a communications or research arm of the Republican party. Interviews with the Fox organization are turned down; questions from their reporters go unanswered.
In Canada, the Prime Minister's office, who originally took a broader stroke, disdaining all media equally, now chooses to feign indifference. The honeymoon between Harper and the media was short-lived with relations between his Press Office and members of the Parliamentary Press Gallery going from chilling to frozen faster than a sonic boom. If that weren't enough, now the Prime Minister says he doesn't even watch Canadian television news.
Now either Harper's totally clueless or he doesn't want to see how critical the media is of his government. While I tend to give pause about the former I guess I have to go with the latter. It's reminiscent of the boy in the bubble or the emperor's new clothes. Or it's like the little kid who covers his eyes with his hands and tells his playmates "You can't see me!" I personally think he's going to ignore the media at his peril, come the next election. 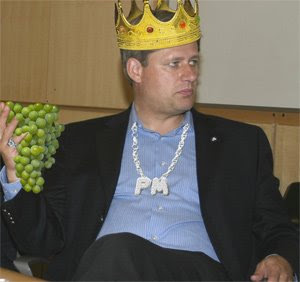 Emperor Harper
Obama on the other hand takes a different approach. He's obviously seen Fox's White House coverage and has taken a bold step to do something about it. I may be wrong, but as an observer north of the border I think if any one's been marginalized in this debate it's been the television network not the President. And some may think, that in engaging in such a public argument about their right to access, that he's crazy. Yeah, right. Crazy like a fox! 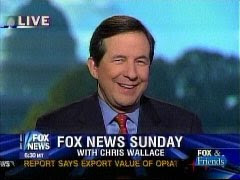 In a Fox exclusive tonight Chris Wallace will not interview the President.

And did you hear? Guess what President Obama is going to dress up as for Halloween?

Donnie said…
Mr. Obama's tirade and rant against Fox News seem to have caused another problem for him however. His "friends" are now all lagging well behind Fox in the much ballyhooed ratings. In fact, Fox has gained new watchers at a rate exceeding the losses of the 3 major "news" organizations combined. I'm certain that Rodger Ailes is now a huuuuge fan of Obama.
30 October 2009 at 13:26

nonamedufus said…
Don: Oh I'm sure Fox feels you can't buy that kind of publicity and they're enjoying a huge ratings surge because folks want to see what this feud is all about. Roger must be peeing his pants. This development is good for what ails him!
30 October 2009 at 13:55

John J Savo said…
Obama is like a spoiled little girl. When he doesn't get his way or if someone disagrees with him, he takes a tantrum and makes an ass out of himself.
31 October 2009 at 19:20

And did you hear? Guess what President Obama is going to dress up as for Halloween?