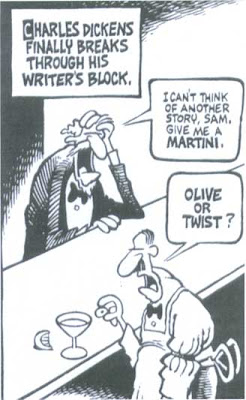 So I'm sitting here thinking. Yeah, just thinking. And staring at this huge empty page. It's not often that the words fail to come, that the thoughts don't crystallize, that the jokes and the puns don't fall into place. But every once in awhile...it happens.
Often I write my posts several days in advance. Sometimes, when creativity is in full flight I've banked a week's worth of material by the end of the previous week. But today...
Today, as the words dribble out hesitantly, it's Sunday. I've got a post up today but after that...
It's that twilight period between doing the breakfast dishes and settling in to the NFL pre-game shows. First Chris Berman and then J.B. and then a double header of frenzied football. An afternoon of zoned-out bliss that will take me away from the pressure of the looming deadline.
But right now the pressure's on. I must fill the page...with something...with anything. God, an ebbing flow of creativity is almost like dealing with a cancer - an insidious, creeping and silent villain.
Scratch that. Nothing compares to cancer.
Rather, an ebbing flow of creativity is almost like...like...like dealing with bubble boy's father. Yeah, yeah that's better. His balloon wasn't the only thing full of hot air. Ha, ha, that's it! Or former President Bush he was full of hot air AND lacked creativity. Or, or, or...well you get the idea.
But, hey, Chris Berman's coming on and now that my creative juices have started flowing again and I've conquered the blank page, come on back tomorrow to see where my creativity takes me. I...could...go...all...the...way.
###
Hey! Head on over to Slings and Arrows, my political satire blog for a chuckle or two. See what all the fuss is about. You'll be glad you did.

Green Stone said…
You know what helps creativity? Mind-altering substances! Sure, it may be early Monday morning, but you can crack open a bottle or two, it'll help!

nonamedufus said…
Kate: Actually, I wrote this Sunday afternoon. But in the end a couple of brews and a mind-numbing Patriot win over Tennessee didn't seem to help. But I felt better about it though!
19 October 2009 at 08:21

Anonymous said…
And still you write a good post!

You were creative about feeling uncreative.

And I find the more pain pills I take? My mind flys with ideas!

Me-Me King said…
Congrats, a post about nothing that turned into something.

http://howtobecomeacatladywithoutthecats.blogspot.com said…
Wow! Is this actually a hoax, like Balloon Boy? Were you really sitting up in your attic all this time, writing furiously?
19 October 2009 at 11:46

Donnie said…
Congratulations. You've just written a Seinfeld episode. A post about nothing that is a post. Sweeeet. I do that everyday--works too.
19 October 2009 at 18:06

nonamedufus said…
Don: I was wondering who would make that connection. You da man Don. I learned from the master!
19 October 2009 at 18:40

Kate said…
You know what helps creativity? Mind-altering substances! Sure, it may be early Monday morning, but you can crack open a bottle or two, it'll help!