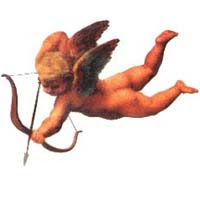 Note: No politicians' reputations were harmed in this satirization. They did that themselves a long time ago.

TWO CLOWNS IN SPACE
By Uni Blogger and nonamedufus

SOMEWHERE BETWEEN EARTH AND THE MOON (S&A) Canadians were shocked to learn today that Cirque de Soleil founder Guy Laliberté wasn’t the only “tourist clown” on board that Russian Soyuz capsule that recently linked up with the International Space Station. He was joined by Bloc Quebecois leader Gilles Duceppe. The two donned red clown noses and performed for viewers around the world via satellite.

Laliberté in Soyuz capsule. More than his nose is Red.

Family and friends of Mister Laliberté on the ground chanted "Guy! Guy!" and sang Rocket Man when the ship reached orbit. There were no friends of Mister Duceppe on hand but political foes were heard to sing a chorus of The Great Gig In The Sky appropriately enough from the Dark Side of the Moon album.

“In da House of Commune I have a national audience dat laughs at me, la. But up here I’m as famous as Leonardo de Caprio, I’m da king of da world”, said the separatist leader. 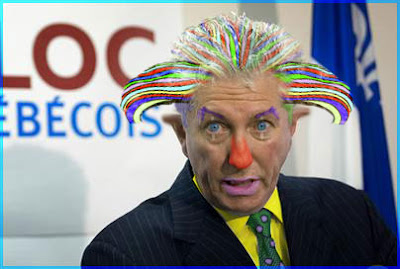 Mr. Duceppe shows his dark side.

Critics worried that Duceppe was scouting out the moon from his lofty space station perch in an attempt to determine if Quebec could move there when it separates from the rest of Canada. However, Leonid Iama Smartypants, project manager of the Russian space agency, on whose ship the two Quebecois are travelling, had a different take: "There is already great concern that Laliberté is jeopardizing the mission because he cannot speak good Russian, now we find he has smuggled on board another who speaks even less good Russian" he said while absent-mindedly pounding his shoe on his desk. “This is a recipe for disaster. How will they get by on the moon when the two founding nations speak Russian and French?” Furthermore said Mister Smartypants, “It would cost $38,000,000 per person to get the entire province to the moon, and they don’t even have their own rockets. 7 million people times $38 million equals a lot of maple syrup!”

“Quebec’s only interested in the moon’s water,” said NDP leader Jack Layton. “It’s James Bay all over again except this time without the Cree. Today James Bay, tomorrow the moon.”

Asked for their comments on the high-flying separatist leader, Prime Minister Stephen Harper and Opposition leader Michael Ignatieff refused to deal with the Quebec issue, consistent with their actions to date. 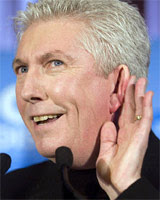 http://howtobecomeacatladywithoutthecats.blogspot.com said…
All that wasted time and energy when they could have been blasting for water on the moon!
9 October 2009 at 12:29

Donnie said…
Obama wins a peace prize and then we bomb the moon. You guys are in orbit with the Soviets. What the hell is going on? Oh that's right. We all love one another now.
9 October 2009 at 12:37

Me-Me King said…
It's a topsy-turvy world. Although I really don't understand what's going on in most parts of the world, at least I can rely on you to give to me straight-skinny on Canada. I sleep better.
9 October 2009 at 16:03

But clowns in space?

I must rest and dream of clowns in space!

HA! I have to include your word verification: bustr!

nonamedufus said…
Quirks: Actually this post was quite timely. Laliberté hosted a 2hr TV special from the space station last night linking 14 countries around the world and performers too including U2 in concert in Tampa, Florida. How about that?