What the Best Dressed Less Fortunate Are Wearing These Days

October 08, 2009
Recently we went out for dinner with some good friends that we hadn't seen in a while. We had a great dinner and got caught up on all kinds of things. After, we went for a short stroll in an effort to walk off the satiating effects of the meal. We chatted, we strolled and we did a little window shopping. And then we came across these... 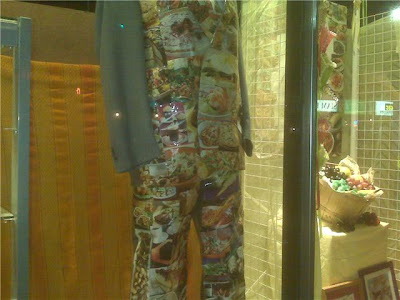 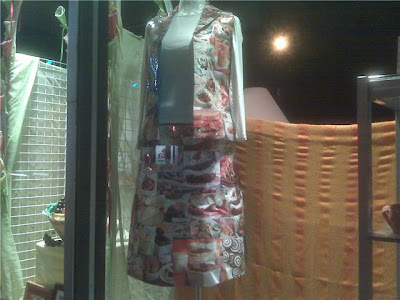 Now these pictures were taken at 9 o'clock at night on a camera-phone so if you can't make them out let me help you. They're a man's suit and a women's outfit in a store window. Nothing odd about that, right? Look a little closer. They're made from pictures of food. And to top it off they're plasticized.
*
What compounded the oddness of the situation was that these outfits were in the window of the St Vincent de Paul Society Thrift Shop. Imagine!
*

Now some people collect stamps or coins. Me I collect CDs. But imagine if someone collected clothes. Maybe they've got Liberace's sequined suites. Or they might have an Elvis jump-suit or two. Lately some guy with money to burn paid $49,000 for Michael Jackson's glove. I wonder what these plasticized chow-down duds would go for.

A couple of thoughts...

a) Who the hell donated these outfits, Mr & Mrs Big Boy?
b) Who the hell would buy these outfits, people who had delusions of being a restaurant menu?
c) Who made them, some guy with a food fetish?
d) Why are they plasticized, to read them in the rain (maybe there's a matching umbrella!)?
e) What could they possibly be used for, for deaf people to just point and nod as they place their order at Denny's?

It would sure change the meaning for a sloppy eater when he says, "Damn, I got some soup on my suit."
*
Or when the waiter says, "Is that a turkey leg on your pants or are you just happy to see me?"

*
Or when the waitress asks, "See anything you like on the menu?" And you say, "No but there's this nice pot roast on my, erm, ah, pot that I wouldn't mind having."
*
And imagine the magnanimous restaurant patron who yelled out, "Hey everyone, drinks are on me...and the appetizers...the main coarse...and coffee and dessert!!!"
To check out some other collections check out Theme Thursday...

Brian Miller said…
bizarre. all your questions...need answers...someone had to think that someone would buy them, and someone did at one point...scary. friends should not let friends do that. happy tt!
8 October 2009 at 07:34

http://howtobecomeacatladywithoutthecats.blogspot.com said…
Is that a turkey leg..... Good one, Dufus! This is an intriguing new style. It's not for me, though... all that plastic might give me a rash. But I like the deaf angle... it would also be useful for foreign travelers who don't know the local language. Just point and eat.
8 October 2009 at 09:37

dreamhaven said…
Hmmm, Good Halloween costume. Not my cup of tea for the dress to impress group,lol.
Happy TT
8 October 2009 at 09:51

But I have to admit that I misread "food fetish" as "foot fetish" and was delighted.

Because I collect my toe-nail clippings.

Can't get anymore fetishiness than that, eh?

nonamedufus said…
Brian: Very bizarre. My firends and I were speechless.

CatLady: Hey, yeah, like IHOP - the International House of Pants.

Anonymous said…
Hey! This was pretty neat...refreshing, if you will. Makes me wonder what's actually in the thrift shoppe, itself...cool take!
8 October 2009 at 11:33

Jasmine said…
Good questions. Maybe an absent minded chef would wear thee clothes. Multi functional right? If you get a spill or a splash you can wipe it clean. If you forget the menu, lo down...
8 October 2009 at 11:58

e said…
My mother had a dress in the 1960's
made from blue and white bubble wrap. It was fun as a kid to watch people when she wore it in public...

nonamedufus said…
Jasmine: Chef and sous-chef outfits? I like it.

Donnie said…
Those are torture devices used by NATO when they go to places like Darfur and Ethiopia. They stroll amongst the starving villagers all the while eating Big Macs and milkshakes.
8 October 2009 at 13:20

Me-Me King said…
Dufus, You are right on top of it! I didn't realize that you were such a fashionista. These "super-sized" fashions were all over the runways during Paris fashion week. Designed with "foodies" in mind, your clothing reflects your favorite mealtime.
8 October 2009 at 14:05

nonamedufus said…
Don: Uh-oh. I knew I could rely on you for the un-pc option.

Me-Me: So you're telling me you are what you wear?

Wings: Yep, it takes all kinds. But these take the cake...and the pie, and the burgers, and the fried chicken...

California Girl said…
you sure they weren't having a performance art show with dummies?
8 October 2009 at 18:02

Kelly P said…
Who in the world would wear something like that.Looks like garbage in a plastic bag.LMAO!!!
8 October 2009 at 20:56

MikeWJ at Too Many Mornings said…
I can't think of anything sexier than a hot date with a pretty woman wearing a Little Food Dress (LFD). It's a classic fashion statement, versatile and appropriate for almost any occasion.

P.S. -- Does anybody else find it faintly disturbing--yet oddly endearing--that Quirky collects her toenail clippings and is willing to put that information on the Internet? I actually read an article about this fetish a year or two ago and didn't believe it was true. Now I, and all of us from here to Shanghai, know better.
8 October 2009 at 21:41

Baino said…
They'd be a bit 'sticky' out here! I'm betting some fashion design student . . .you know, the sort that makes wedding dresses out of condoms. Actually, considering my propensity to literally 'wear' my food . . I could probably do with at least the jacket! Yeh, maybe the LFD is the new Black.
9 October 2009 at 03:00