October 18, 2009
It was an interesting week, last week, in the funny papers. Political cartoonists were still taking a jab at Obama, his peace prize, and bombing the moon. The Canadian dollar gained ground on it's American counterpart last week achieving almost equal value. And while Canada may not got the Phoenix Coyotes, there was a rumour last week the NHL may well resurrect the Quebec Nordiques. Vive la difference! Oh, and Rush Limbaugh (great football name) was turned down in his efforts to own the St. Louis Rams. Just as well. No one saw him as a minority owner! 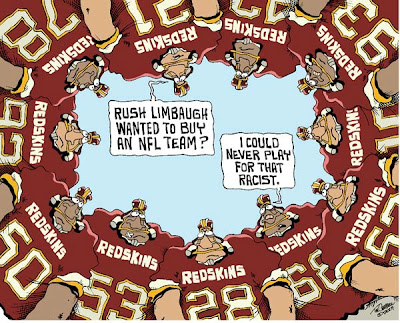 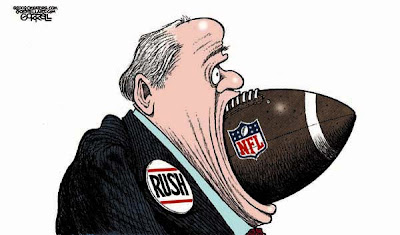 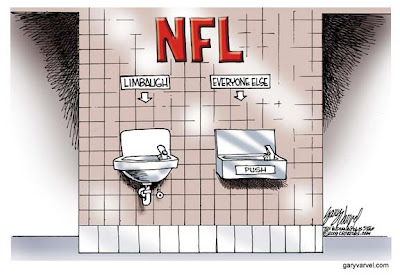 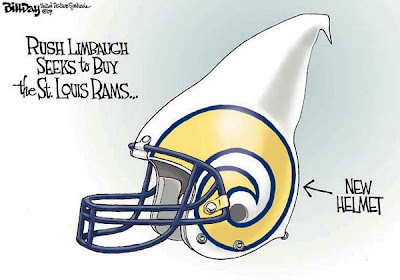 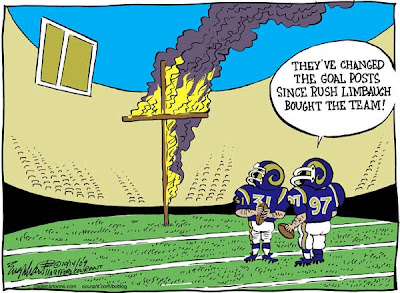 http://howtobecomeacatladywithoutthecats.blogspot.com said…
This comment has been removed by the author.
18 October 2009 at 11:49

http://howtobecomeacatladywithoutthecats.blogspot.com said…
Some weeks they just make it too easy!

Anonymous said…
Hey, thanks for the shout-out! Oh, those "loonies" weren't about moi?

Fine. Be that way.

My fave cartoon, the new helmut inspired by Rush.

nonamedufus said…
Quirks: Maybe not about you, but it's all in the family with your northern cousins.
18 October 2009 at 13:28

Chris said…
My question is, whose idea was it to get Limbaugh involved with football in the first place? Having him do commentary as part of an NFL show was ridiculous, and this is what happens. He's a buffoon, and as such, let him stay with his own show, so his listeners all stay in one place.
18 October 2009 at 22:46

nonamedufus said…
DK: I know. The outcry over this was amazing. And largely due to some of his comments about black players when he was a commentator.
19 October 2009 at 06:37

Anonymous said…
Hey are you a professional journalist? This article is very well written, as compared to most other blogs i saw today….
anyhow thanks for the good read!
5 December 2009 at 13:54

Anonymous said…
Hey are you a professional journalist? This article is very well written, as compared to most other blogs i saw today….
anyhow thanks for the good read!
12 May 2011 at 14:56

CatLadyLarew said…
Some weeks they just make it too easy!