All The News That Wasn't Fit To Print

October 16, 2009
Every once and a while I'll wander off the front pages of newspapers and turn away from prime time newscasts to, as Lou Reed so aptly put it, take a walk on the wild side. There's a whole other world out there beyond politics and current affairs and luckily for you I'm here to guide you through some of the wackier headlines and stories. Here, gentle reader, is the latest edition of...noname news. 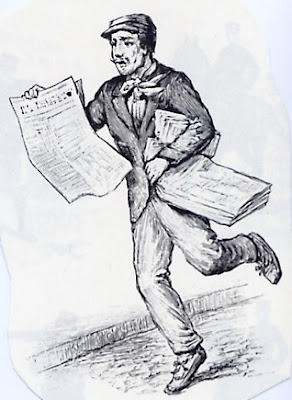 Some headline writer somewhere had a field day with this story - a pumpkin field to be precise.

I thought that was a really gourd one! Oh by the way, the giant jack o' lantern weighed 1,658 pounds. It's owner's now a real heavyweight in the pumpkin growing business.

Spoon in June under a bright full moon. Tin Pan Alley songwriters used to try their best to find rhymes for moon. But there was no rhyme or reason for this moon. In a story headlined

Once in a black and blue moon...

we are told of a young German fellow who, upon being ejected from a train for not having a ticket decided to moon train employees and proceeded to press his bare butt up against the train window. Alas his pants got caught on a carriage door (and he's lucky that was all he caught) and the naked nincompoop got dragged 200 meters out of the station and down the tracks. All I can say is what a bummer - end of story.

Talk about a golf course water hazard. A golfer in Beaufort, South Carolina lost part of his arm when he went to retrieve his ball out of a pond. Turns out a 10 foot alligator called that pond home. Gives new meaning to the phrase golf handicap. And if he continues to play, I guess you'd say you really have to give the guy a hand!

Born with half a brain, woman living full life

This headline jogged my memory, you might say. It tells the tale of a woman who suffered a pre-natal stroke that left her with the use of only half of her brain. However, by the age of 27 her doctors determined that her brain had virtually rewired itself. Why did this jog my memory? Because my mother would always wag her finger at me and say "Why I have half a mind to..." (insert parental threat here) And I'd think to myself "Mom, if you had half a mind you'd be dangerous!"

And that's this installment of noname news. We now return you to our regularly scheduled blog.

http://howtobecomeacatladywithoutthecats.blogspot.com said…
Love the noname news! Now I won't have to read the paper or watch television ever again... if it's newsworthy, you'll tell me. Thanks, Dufus... you're a real pal!
16 October 2009 at 08:53

Me-Me King said…
These are all great stories! I am especially interested in seeing the follow up to the alligator in a golf course pond. How in the world did it get there?
16 October 2009 at 12:10

There are plenty of "dufuses" out there and it's great to have them pointed out to us.

BTW, I think I bear the same affliction as the half-brained woman.

Donnie said…
Spooning in June under a bright moon? Uh, apparently spooning has different meanings. I'll pass on that one. I used to take a week off and go to Beaufort. Rented a home. No doubt. They have nice balls there.
Love fat boy shooting off in your sidebar. Sorry. That sounded as bad as spooning under a bright moon.
16 October 2009 at 14:30

MikeWJ at Too Many Mornings said…
I was born with half a brain and yet I function like somebody with one-quarter of a brain. Fucking scientists. They can shove it.
16 October 2009 at 14:42

nonamedufus said…
Don: Yeah, yeah spooning can lead to forking, I know. I hope you stayed away from the golf course in Beaufort.
16 October 2009 at 15:24

Unknown said…
I love these kinds of stories. You don't have to strain a molecule to read them. How about that balloon flight eh? The dad did it for publicity. Did you see today the baby stroller that rolled in front of a train? The engineer slowed down the train and dragged the stroller a ways but the baby was fine. Weird shit huh?
16 October 2009 at 17:19

nonamedufus said…
ettarose: I saw both those stories. Weird stuff but it beats politician's and talk show host's infidelity. I mean, who cares?
16 October 2009 at 18:04