September 03, 2009
Today some humourous looks at "beginnings" and a look at the beginning of humour...
The Creation Of Humour...The Condensed Version 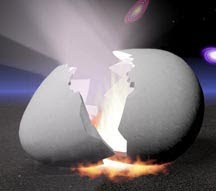 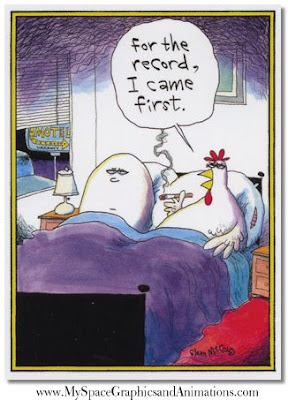 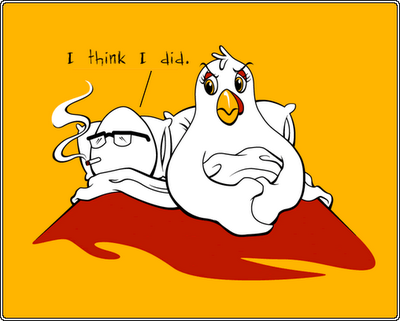 Why God Created The Stupid Wife

The man thought about this. Then he said, "I don't mean to seem ungrateful or anything, but ... why did you make her so stupid?" "So she could love you, my son."

Baino said…
Far more plausible than the original but you haven't answered the question. Which did come first?
3 September 2009 at 08:05

http://howtobecomeacatladywithoutthecats.blogspot.com said…
I'm definitely going to tell this to my Sunday school class. So they can love me.
3 September 2009 at 08:06

Unknown said…
I enjoyed this post immensley.. especially the checkien and egg ones..

Alan Burnett said…
Its good to have a bit of humour in place of all that searching for the beginning of the meaning of life stuff.
3 September 2009 at 10:46

Donnie said…
Nicely done! Although I'm not so sure that the joke is actually a joke. That seems to be the case with a lot of great looking, intelligent women. Go figure...!
3 September 2009 at 11:07

Anonymous said…
Creation of humor? That was brilliant Noname! I loved it!

nonamedufus said…
Harnett-Hargrove: It's a bit of an improvement.

subtorp77: Glad you enjoyed it.

dizzblnd: Yeah they cracked me up too.

Don: Thay just make us think we're smarter. They're pretty good at it, too.

Brian: Yeah, God has a pretty good sense of humour.

Yodi Insigne said…
this one brighten up my boring morning,
I love that chicken married to an egg...
3 September 2009 at 21:30

MikeWJ at Too Many Mornings said…
In my version of the humor creation story, God specifically created the chicken joke on the second day. Probably due a problem with the translation or something. I'm a strict adherent of the Kentucky Chicken Version (KCV). (In case you're curious, here's my take on the chicken joke:
http://www.toomanymornings.com/?p=1075)

Yodz: My work here is done.

MikeWJ: Glad you liked it. I'll have to check yours out.

Dreamhaven: Glad I made you laugh. Mission accomplished.

nonamedufus said…
MikeWJ: (UPDATE) I read your post and it cracked me up. However the "Which came first" question remains unanswered. Unless of course the chicken crossed the road to get to the egg, who crossed first!
4 September 2009 at 13:37