September 14, 2009
The other day I came across something called the Chevy Nova Awards. They're called that in honor of the General Motors fiasco in trying to market this car in Central and South America. "No va" means, of course, in Spanish, "it doesn't go".

The following are the top three Chevy Nova nominees:


1) The Dairy Association's huge success with the campaign "Got Milk?" prompted them to expand advertising to Mexico. It was soon brought to their attention the Spanish translation read "Are you lactating?"


2) Coors put its slogan, "Turn It Loose," into Spanish, where it was read as "Suffer From Diarrhea." Yeah I can relate to that!


3) Scandinavian vacuum manufacturer Electrolux used the following in an American campaign: "Nothing sucks like an Electrolux." Hmmm...


If you wanna see the rest, hit up this site.


Speaking of awards, last week, right out of the blue, I received an Awesome Blogger Friend award from a fellow blogger.

ettarose at Sanity on Edge, I guess in a moment of blogger bathos (Oooo...nice alliteration/thank you) picked a couple of folks to pass this on to... 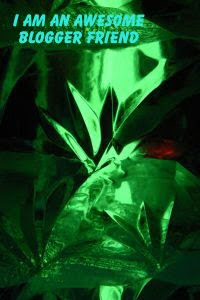 ...myself included. This means a lot 'cause she's one helleva lady. For instance she won a custody battle for her grandkids. Kudos for your love.

And she writes this marvellous blog called The Voices where she posts about the situation in Darfur and civil rights issues elsewhere in Africa. Kudos for your passion.

Recently, she was laid off from a job she'd worked at for over 25 years. Kudos for your fortitude.

And, if that weren't enough, she still cranks out a very funny humour blog at Sanity on Edge. Kudos for your sense of humour.

And you must have a great sense of humour, Susan, if you give this award to me. Because, to me, YOU'RE the awesome blogger friend. Cheers...and thanks.

Anonymous said…
Congrats on the award! It is most deserving and what a nice shout out to Ettarose!

I didn't know about The Voices blog. Hmm. I'll have to go check it out.

MikeWJ at Too Many Mornings said…
I think the world would be a far better place if, instead of asking, "How are you?", we substituted the question, "Are you lactating?"

Donnie said…
If I'm going to place an ad in a foreign country, I'm calling a national from that country to design it. It's the only safe way to go. Unless he hates Americans. Congrats on the award from Ettarose too. She doesn't give those out too frequently.
14 September 2009 at 14:06

Skye said…
I have to admit, that I hadn't known about her blog "The Voices" either. I too will have to go and check that one out.

Skye: The Voices is a fascinating blog that I discovered through ettarose's tweets.
14 September 2009 at 18:19