Since When Is Basketball Played With Guns?

Orlando breaks out...the ball is brought up the right side of the court...a pass to the left...uh, oh...a Laker guard draws his magnum and demands the ball be handed over...wait a minute...the Orlando center has just pulled a sawed-off shotgun and threatened to blow the Laker player away unless he gives back the ball...

You laugh, but given events of a couple of weeks ago that only just came to light, this type of thing may come to pass.  It seems two members of the Washington Wizards basketball team called each other out in the team's dressing room, arguing over a gambling debt one owed the other, at gunpoint. 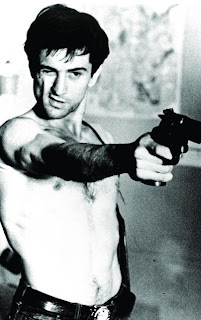 Are you dribbling at me?

Get this.  It's not clear if the the guns belonged to both players or just one of them.  Yeah, right.  Gotta game tonight.  But you never know what could happen in the dressing room with my team mates.  I just better be packin' to be on the safe side.

Why is it lately every time  a sports fan turns around he learns the athletes he watches on the field, or the court, are just a bunch of thugs off the field?  Michael Vick, Plaxico Burress and now Gilbert Arenas and Javaris Crittenton.  And why are these guys paid millions of dollars?

No wonder the Wizards changed their name from the Washington Bullets.  Well, at least if these guys are suspended by the NBA they can always fall back on robbing liquor stores.

Joel Klebanoff said…
It's about time they added a little excitement to sports. What's fun about watching some guys throw a ball around? Boring. Now, a little shoot-em up, that's exciting! And it's not as if society is going to suffer much if there are one or two fewer jocks in the world.
5 January 2010 at 10:07

nonamedufus said…
Joel: Your insightful take on professional sports is refreshing, Joel. You really take aim of the problem. I agree. We need to do something about the calibre of the game.
5 January 2010 at 10:12

Donnie said…
The owners see players as livestock. They've invested the money and now they want a return.
Instead of kicking them off the team, owners whine as though they're truly disturbed by an incident and then demand they get back into the game. The whole time everybody paying to see the games is cheering on the hoodlums and wanting to see blood. I'd carry a gun too.
5 January 2010 at 10:17

Instead of the NBA, call it the NDA.

Instead of a "tip off", the first team to get the ball would be decided by who won the draw at 10 paces.

The cheerleaders are already on board with their cheers of "shoot, shoot, shoot".

nonamedufus said…
Don: I really don't agree with the salaries these guys make and the fact that these salaries seem to give most of these guy a license to act any way they damn please, including breaking the law. You're right Don. The owners are afraid to even slap them on the wrist.
5 January 2010 at 11:23

nonamedufus said…
Me-Me: Maybe they should re-brand the NBA the NWA. And I like the dueling idea. It might get rid of some of these idiots that give the sport a bad name.
5 January 2010 at 11:26

Chris said…
When the Bullets changed to the Wizards, I heard the best basketball one-liner ever:

"The Washington Bullets are changing their name, because they don't want a name that is synonymous with violent crime. Henceforth, they will be known as the Virginia Bullets."
5 January 2010 at 16:43

nonamedufus said…
Knucklehead: Good one. Now maybe they can change their name to the Winchester Wizards.
5 January 2010 at 16:59

Unknown said…
This comment has been removed by a blog administrator.
7 January 2010 at 13:41

Unknown said…
This comment has been removed by a blog administrator.
7 January 2010 at 14:43