One Man's Relatives Are Another Man's Jail Mates

January 12, 2010
Get this guy.  You may have seen this story at New Year's.  A 35 year-old Italian decides he'd rather go to jail than spend New Year's with his wife and relatives.

He tells police to throw him in jail and they say they can't because he hasn't committed a crime.  So he threatens a convenience store owner with a box cutter, steals some candy and gum and waits for the police to arrive.

Now this is too much.  Why in the world would he do this?  Are his relatives members of the Cosa Nostra?

Or maybe it's just a big family and he didn't look forward to hanging out with them.  Hell we had close to 25 people over for Christmas and you didn't see me pulling something silly like that.

Why in the world would the guy rather spend the night in jail than with his relatives?  Hmm....

Well I did a little research.  And although it was time-consuming I felt I owed it to my readers. 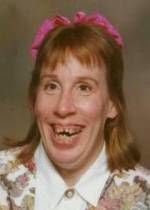 His dear mother-in-law Carla "Beak" Bella, who you can tell is on her way over for a visit when her nose turns the corner:

The father-in-law, Lucio "Legs" Bella.  He's the one that wears the pants in the family...some days: 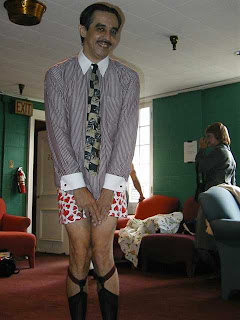 And here's his brothers-in-law, the Bella Brothers, the only team entered into that rare Sicilian athletic event, the 6x6 bread stick relay.  The only place they're being chased is out of town. 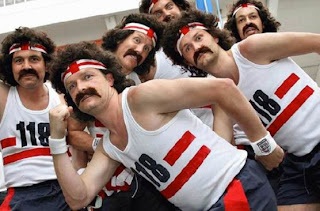 Hmmm....  I think I'm starting to see just how smart this guy is.

Moooooog35 said…
Depending on your family, sometimes prison rape is your only true choice.

nonamedufus said…
Moooooog: You've always got a hand up on these things. Turns out this guy seems to have had the right idea.
12 January 2010 at 07:25

Anonymous said…
I have the opposite problem.

The family conveniently "forgets" to tell me when and where the gatherings are.

Could it be my singing?

Unfinished Rambler said…
Thanks for getting to the heart of this story. I knew there was more to it when I heard about it, and you, in the way only a Canadian can, cut to the chase.
12 January 2010 at 11:00

Donnie said…
I spent a Thanksgiving in jail once when my in-laws were coming over to eat. That's not the reason I was in jail though. That's just where I was when they carved the turkey. I had bologna and Frosted Flakes.
12 January 2010 at 11:03

Me-Me King said…
After browsing the family photo album, I don't blame him one bit. Talk about losing your appetite...ack, ack, buuu-iccccck.

Kirsten said…
It's weird. The last time I had Easter at my house, my mom stole some hubcaps, my dad flashed someone at the park and my siblings all got sent to the drunk tank that morning. I had Easter by myself. I can't figure that out to this day. Hmmmmm
12 January 2010 at 13:20

nonamedufus said…
idifficult: I'd think it would depend on how long you intended to stay and whether or not you needed a shower.
13 January 2010 at 08:15