June 20, 2012
Here's a bit of a twist. My response to today's prompt of "going solo" is actually about a solo going in partnership. 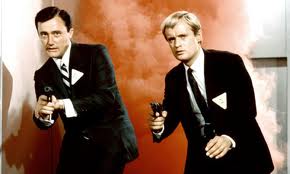 Yeah, when I saw the prompt, I immediately thought of Napoleon Solo. Remember him? I'm probably showing my age here but Napoleon Solo was one half of the television team known as The Man From U.N.C.L.E. U.N.C.L.E. was an American television series that ran for 4 years on NBC in the mid-60s. I remember watching it. It was a serious - more or less- counter-balance to the not-so-serious Get Smart which I also watched without fail.

Solo was the character portrayed by Robert Vaughn. The series initially was to be built around him and was developed by Ian Fleming. Yeah, that Ian Fleming. The man responsible for James Bond.

Turns out, though, that a scene featuring a Russian agent named Ilya Kuryakin went over well with viewers and so the two were paired and the rest is history. Kuryakin was portrayed by David McCallum who, these days, portrays "Ducky" on NCIS.

The thing I remember about McCallum is his haircut. Nobody I knew - on TV or in real life - had a haircut like that. It was pretty special.

You can see it in this clip from the show where McCallum shows off not just his hair but his singing ability with Miss "These Boots Are Made For Walking" Nancy Sinatra...

This was much more fun than going solo!

See who else is flying solo via the links at We Work For Cheese.


And check out this week's Pause Ponder and Pun caption contest at dufus daze.

Linda Medrano said…
I loved that show! Very entertaining. These guys were so suave! It had a little sense of humor, but wasn't over the top like "Get Smart".
20 June 2012 at 08:48

Cheryl P. said…
I didn't remember the name Napoleon Solo. I occasionally watched the Man from U.N.C.L.E. but not regularly. I remember more about Get Smart. Seemingly I was a fan of stupid TV shows even back then.
20 June 2012 at 14:10

Lauren said…
I can't remember if I watched "The Man from Uncle." Definitely showing my age. But, oddly, I remember watching "Get Smart."

nonamedufus said…
I loved how both shows were take-offs on the more serious spy shows and movies Like I Spy and James Bond.
24 June 2012 at 20:31

nonamedufus said…
Really? It might be a worthwhile DVD set to get. I have the Get Smart series on DVD. Watching that damn intro over and over again gets a little boring though.
24 June 2012 at 20:33