June 27, 2012
Monday night this week my wife and I, her son and a friend of his crossed over to Ontario and headed out to Kanata on the outskirts of Ottawa where on the side of Highway 417 sits Scotiabank Place. The arena is home to the Ottawa Senators of the NHL. But this night, with hockey over and the Senators long since on the golf course, the hockey barn was home to a touring rock and roll act.

For over 2 years now, former Pink Floyd member (remember them?) Roger Waters has been on tour performing his 1979 double album "The Wall". Monday night, after travelling through here last year, Waters stopped for another performance. And what a show. I'll remember this one for a long time. 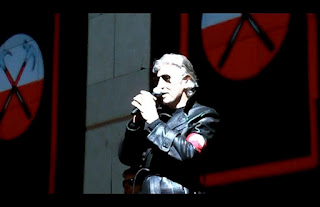 He was backed by an incredible band, including G.E. Smith the former Saturday Night Live band leader in the late 80s and early 90s. But the star of the show, apart from Waters, had to be lead guitarist Dave Kilminster who plays all of original Pink Floyd guitarist David Gilmour's parts. With your eyes closed you'd think it was Gilmour. 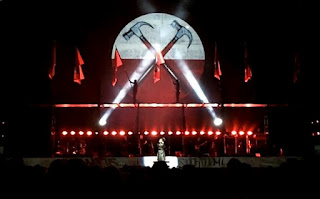 The concert was loud. At one point I registered the sound close to 100 db on my iPhone "Noise Sniffer" app. But then rock and roll is supposed to be loud, isn't it? The concert was also visually stunning combining props such as an exploding plane, a huge inflated school teacher and a roving inflated pig with projection and animation on a huge round screen and the wall, as it is built up during the first half of the concert and was torn down during the second, as well, of course, the live music. 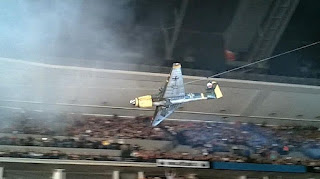 It lasted a good two and-a-half hours after which my ears were ringing - but in a good way.

It was apt it was a concert by Waters, as it rained Monday night. And the rain affected me about as much as Waters did, but not quite in the same way. You see as I powered down my car window to pay the parking fee before the concert my automatic window blew. I couldn't power the bloody thing up. So, necessity being the mother of invention, and rain prevention I guess, I affixed several canvas shopping bags to the drivers door to keep the rain out while we went into the concert. It worked. The driver's seat remained dry for the ride home.

If you're interested, a local review of the concert is provided here by the Ottawa Sun. The reviewer was as in awe as I. Waters is scheduled to perform The Wall outdoors in July at Quebec City's Plains of Abraham. It's touted as being bigger and more extravagant than the memorable outdoor concert he performed at Berlin's wall decades ago. If he's coming to a city near you, I highly recommend you see him. You'll love it.

I took over 60 pics with my iPhone at the concert. They're keepsakes, really, but not of good enough quality for the blog. The images are from Wikipedia.

Crash down that wall and drive on over to Nicky's side of the road to see who else is still motoring along in our little 30 day extravaganza.

babs (beetle) said…
That sounds great! I think a most musicians improve with age. I saw the Rolling Stone at Hyde park (1969) and it was memorable, but when we went to their concert in 2006, we were blown away with it. You totally don't notice their age once the music starts!
27 June 2012 at 07:29

nonamedufus said…
Oh, I envy you. Never saw the Stones. Saw Zep, the Who, the Troggs and some others back in the day. And I'd never seen Pink Floyd. But this show was simply fantastic. Waters, at 68, pulled off an amazing two and-a-half-hour concert.
27 June 2012 at 07:51

nonamedufus said…
Oh, I envy you. Never saw the Stones. Saw Zep, the Who, the Troggs and some others back in the day. And I'd never seen Pink Floyd. But this show was simply fantastic. Waters, at 68, pulled off an amazing two and-a-half-hour concert.
27 June 2012 at 07:58

If I were God... said…
I was lucky enough to see Pink Floyd at Giant's staium and Roger Waters at Madison Square Garden in the same year -right after Radio Kaos came out. Both very good shows
27 June 2012 at 10:13

Linda Medrano said…
The Wall is one of my all time favorites. Sheer genius! I'm so glad you went to see this one. I avoid crowds like that, but this would have been worth the discomfort!
27 June 2012 at 12:46

Nicky said…
I saw Pink Floyd twice in the late 80's, sans Waters, and they were mind-blowing. Hmmm, I wonder if there are still tickets available for the QC concert...

Lauren said…
My husband and I are dying to see the concert. We're both Pink Floyd fans. On our first date, we went to see "The Wall" at Rockefeller Center. I heard the concert is supposed to be amazing. Did you catch the Waters' interview on 60 Minutes?

As a side note, I worked as an administrative assistant in the A&R Department when the album was released. My boss, Paul Atkinson of Zombies fame, was the A&R guy handling the album. I remember typing the liner notes.

Quirky Loon said…
Now that's one heck of a side of the road distraction. And fun too.