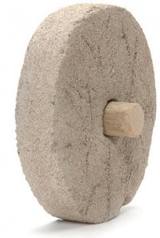 I'll bet you didn't know that the development of the wheel was in dispute. Oh, yeah. It seems there's evidence to support the creation of it simultaneously in both Mesopotamia and Central Europe in the mid-fouth millennium BC. Imagine that.

And I thought the wheel was discovered here in Canada. After all, we were the first to create a Tim Horton's drive-thru. I thought it only natural that the wheel would come after that.

Can't you just imagine how it happened?


The Scene: It's snowing in the Canadian Rockies. A couple of Canadian caveman neanderthals are sitting around a fire - that they recently invented - wondering what to do next. We come upon the scene in mid-discussion...

"...and so I'm thinking of either becoming a lumberjack or a Mountie. How about you?

"Hey, Bob, you wanna head over to Tim Horton's for a French Cruller and a double-double?"

"Sure, Dick, but the nearest one'll take us three days to walk there. I'm kinda hungry now."

"Well, Bob, we could always take my wife Felicity's wheel."

"Wheel, she invented a wheel. You know, a round thing that rolls?"

"Seriously, Bob, let's take her wheel. I'll ask her if she wants to come along."

"I'm impressed. I guess you could say Felicity is the mother of this here invention."

"I don't know if you necessarily have that right, Bob."

"Oh, Felicity talks too much. I don't want her to be distracted. I'd better drive."

And, folks, because Dick drove, not only did Canadians invent the wheel but the passenger seat air bag, too!


And now you know the story behind the wheel.


There are no rules to this little exercise. Participants are in for the long haul, a half haul or a day here and there. I tried my best to keep track of who's in on this little exercise but after a couple of days gave up. Our loquacious leader Nicky has taken a very lackadaisical approach to all this. Well, she's French, eh, and we all know how laissez-faire the French can be. So what I suggest you do is visit her at We Work For Cheese and check out her linky-dinky thingy to see who's in from day to day. And if you're in, leave your link with her so the rest of us can drop by and leave smart-ass comments on your post.

Unfinished Person said…
I really had no idea. Canadians pretty much invented everything. I'd like to hear how they invented fire from you. :)
4 June 2012 at 08:52

nonamedufus said…
I'll save "fire" for another post, smarty pants. But Canadians did invent some things you might not have been aware of... http://en.wikipedia.org/wiki/List_of_Canadian_inventions

mikewjattoomanymornings said…
Damn you, NoName. I could really use a Tim Horton's donut right now. Not good for me, I know, but they're so good when they're fresh.

I love the line about being a lumberjack or Mountie. Pretty much what every American thinks every Canadian does for a living unless they're playing hockey.
4 June 2012 at 11:56

nonamedufus said…
Grinning like a fool? Are you tripping again, Jayne? Yeah, I'm just waiting for Lorne Michaels to return my phone calls.
4 June 2012 at 12:07

nonamedufus said…
Oddly enough I don't think they're fresh anymore but made centrally and shipped to stores frozen. Hence they dropped the promotion "Always Fresh".

Oh, and ironically, Tim Horton was a hockey player - until he died after slamming his De Tomaso Pantera into a concrete wall on the highway between Toronto and Buffalo in 1974. He was going over 100 mph apparently and an autopsy determined he had twice the legal limit of booze in his system.

I love the parody in the Mike Myers film with Stan Mikita's Donut Shop. But then maybe you had to be Canadian to fully appreciate it.
4 June 2012 at 12:16

Adminderella . said…
I've never had Tim Horton's... I am culturally deprived (or is that depraved?)
I HAVE had poutine, though. Albeit homemade so for all I know, I do it incorrectly...
Is there a law against mixing the consumption of Tim Horton's with the consumption of poutine? Just wondering...
4 June 2012 at 12:17

nonamedufus said…
Never had Tim Horton's? You haven't lived. And there's nothing quite like the quintessential Canadian meal: a poutine topped off by a couple of doughnuts from Tim's My favourite is the French Cruller. But if you really want to be a wanna-be Canadian have a Maple Glaze.
4 June 2012 at 12:26

nonamedufus said…
Well exactly. And it all comes together nicely because at Tim Horton's you can roll up the rim to win!

Nora Blithe said…
What's this Tim Horton's I keep hearing so much about. We don't have them in Georgia. I was going to add a snarky comment about everyone knowing that the wheel was inventing in (insert name) because of (insert joke) but I've got nothing today. Other commenters will have to fill that in for me.
4 June 2012 at 14:12

nonamedufus said…
Tim Horton's is a Canadian doughnut fast food place created by a former hockey player of the same name and his business partner. It expanded to the States after partnering with Wendy's, although I guess not to Georgia. Tim's is famous for it's coffee and Tim-bits, which are actually the centres cut from doughnuts. A "double-double" is a Canadian iconic foodstuff associated with Tim's: a coffee with 2 cream and 2 sugars. See what you're missing?
4 June 2012 at 14:19

Quirky Loon said…
I'm so glad you 'splained what Tim Horton's is. And when you mentioned a "double double" I thought it was a burger joint like In & Out Burgers. Their double double is to die for. *slurp*

And of course, Canada invented the wheel. That's why we forgive you for Celine Dion.

Linda R. said…
Thanks for setting the record straight about the true history of the wheel.

StubbornFool said…
It's doing it again, deleted my comments!

Anyway, why are double-doubles so popular at Tim Horton's?

00dozo said…
Oh, you tease! French crullers are my absolute FAVOURITE doughnut! Alas, we cannot get them here. We cannot get any fresh doughnuts here - and I certainly wouldn't count "Krispy Kreme" as real doughnuts.

At any rate, this was a fun post. You're photo kinda reminded me of the "B.C." comic strip and I could imagine that Canadian neanderthals would look and be as laid back as those guys. ;-)
4 June 2012 at 20:01

Nicky said…
Dufus, I don't know why you keep telling people I'm French. I'm not French, I'm half Greek and half German and half Quebecker and 100% Montrealer. Jepeto is the French one and the crazy one. You know, people are going to question your credibility if you keep messing up your facts like that. They might even doubt this historical lesson of yours. By the way, I give you 150 points for the revisionist history. :-)
4 June 2012 at 21:51

nonamedufus said…
Hey, listen, you're always gonna learn something when you stop by hear. By the way, I watched the movie Hemmingway and Gellhorn the other night. One of his lines was to the effect "The best writers always lie". Not that I'd ever do that.
4 June 2012 at 22:52

nonamedufus said…
Yeah I should say two milk and two artificial sweeteners for my cholesterol and diabetes but it's so much easier to say double-double.
4 June 2012 at 22:53

nonamedufus said…
I might have played around a little with the facts...but it coulda happened.

nonamedufus said…
You're not French!!! Me neither. Yet we both hooked up with Francophones and live in the land of Charest. Look at us already!

Nora Blithe said…
That sounds totally yummy. I cannot imagine why they haven't made it to GA. Food usually does well here no matter what kind of food it is!

Sandrasfiberworks said…
Lol. Like this. And good for you asking on this challenge; I'm still recovering from the A-Z one. We've been corresponding on LinkedIn and I appreciate your input. Also. If you're looking for more writing prompts: http://sandrasfiberworks.blogspot.com/2012/05/having-taught-fiction-writing-for-years.html
5 June 2012 at 06:45

nonamedufus said…
And Tim's has a breakfast menu and a lunch menu too. It's pretty much a full-service fast food restaurant now. I think you'll need to take a road trip to Canada!
5 June 2012 at 07:15

Nora Blithe said…
I would love to see Canada! I'll look you and Nicky up if I make it.

Friar Don said…
ROFLMBO! Great writing as usual!! Like Horton's, but wish they were fresh/home made instead freshly unthawed and heated up to look fresh made... Would be even better then!!