June 10, 2012
I first posted this in December 2009 under the title of The Value of a Dollar. I hope you enjoy it as it qualifies for today's theme, and I'm taking the day off.

When I was a tyke growing up in Scarborough, then a bedroom community of Toronto, our neighbour Mrs. Painter used to babysit me while my mom and dad spent the day at work. I think this was before I attended kindergarten so I must have been 4 years old. Now times were different in the mid 50s. Kids had the run of the neighbourhood and weren't overly chaperoned. Parents and guardians trusted the kids they looked after and there was a high sense of safety and security in the neighbourhood. All kids had to worry about was being home by the time the streetlights came on. In hindsight this was a little odd since most of the adults were kind of freaking out at the height of the cold war. 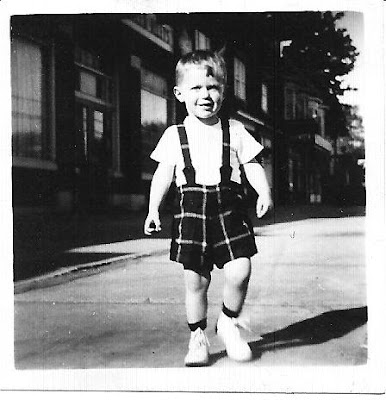 Kids spent a lot of time out of doors and our games of choice were hide-and-seek and Cowboys and Indians. Me and my pals spent most of our time engaging in these games, sneaking through neighbour's yards, climbing fences and hiding behind trees and shrubs.

One day Mrs. Painter told me she was going to make hamburgers for lunch. Ah, one of my favourites, with ketchup, mustard and relish. And Mrs. Painter's devilled eggs were legendary and they were on the menu too. But Mrs. Painter was out of hamburger buns. So, she gave me a quarter and sent me off to the "corner" store to get some, about a five minute walk away.

Now at the corner of our street sat a house with a nicely trimmed little hedge abutting the sidewalk protected by a series of silver lead pipes with a wire strung through them. I'd passed by these pipes every day without a thought. But that day, with a shiny quarter in my hot little hand I paused for some reason. I looked at the hallow pipe and back at the quarter in my hand. It's odd how a four-year old processes things. I felt on the edge of a huge discovery not unlike Alexander Graham Bell or Albert Einstein. I slowly raised my hand until it hovered over the pipe, the quarter clinched tightly between my thumb and forefinger. And then I let go. Son of a gun. It fit! Alas, the result of my successful experiment was that the quarter was lost forever.

Mrs. Painter thought it was funny when I told her how I'd lost the quarter...the first time. You see little Einstein repeated his experiment...two more times. Guess what? Those quarters turned out to be the same size as the first! And those hamburger buns were the most expensive buns Mrs. Painter had ever bought.

See who else delivered on today's theme by clicking on the link thingy over at Nicky and Mike's place We Work For Cheese. You won't be disappointed and it's free.

Cheryl P. said…
I have no doubt that your post will be the cutest story of the day. Mrs. Painter must have been a really sweet person not to have scolded you after the 2nd quarter was lost.

You and I are about the same age, so I know exactly what you mean about how we played outdoors until dusk. Part of the reason my parents weren't worried was that the whole neighborhood knew each others children. Times were different for sure in the mid 50's. It was great while it lasted.
10 June 2012 at 09:12

NathanaelV said…
Great story! Mrs. Painter strikes me as a babysitter I wish I had, all I had were ones that were anything but good.
10 June 2012 at 09:59

Katherine Murray said…
That is hysterical! When you were hovering over the pipe, I was thinking, "Nooooo!" Just like a movie thriller!!!!

nonamedufus said…
Life was grand back then. Kids just don't have the same degree of carefree freedom today. Hell, I used to take a bus and a subway to school to downtown Toronto when I was in Grade 3 and 4. Alone. When I had kids I couldn't have imagined letting them travel that distance by themselves. Times have changed, indeed.
10 June 2012 at 11:49

nonamedufus said…
You know I was so stupid, but I was a kid. I mean of course all those quarters were going to go down the pipe. But I just had to be sure.

I think Cowboys and Indians is a little politically incorrect today but it sure was fun back then. And somehow the Cowboys always seemed to win.
10 June 2012 at 11:53

Linda Medrano said…
We used to leave the house almost at daylight, and stay out until it was getting dark. We played without play dates, we had adventures without equipment, and we had fun without toys. We played Cowboys and Indians too, but I was always an Indian and a brutal savage Indian. I won. Every time.
10 June 2012 at 12:21

Linda R. said…
Your babysitter was a patient and generous person. Somehow I don't think that is something I would have thought about at 4. Nor would I have been allowed to walk anywhere to buy anything even if there had been anywhere within walking distance to shop.
10 June 2012 at 12:24

Leeuna said…
Ahh, what a cute story. Is that a photo of you? Life was so much easier back then and we didn't have any of the things we have today that is supposed to "make our lives so much easier".
10 June 2012 at 15:46

StubbornFool said…
My mom said she and all the mothers would leave the babies and baby carriages at the front of the store while they went to get their groceries.
10 June 2012 at 15:48

Quirky Loon said…
Quitcher braggin'! I long to let my 8 yr old boy out til dusk. But no way no how. ;(

Aw, what the heck, I'm glad SOMEBODY got to do it.

AND... your experiment reminded my of my 8 year old son. He loves to YouTube science experiments. Lately his fascination has been plastic bottles that explode.

Should I be worried?

Dr Tunguska said…
Strange how safe our childhoods seem. I spent mine jumping off of roofs in a nearby council housing estate. No kid would be allowed to do that these days.
10 June 2012 at 16:43

nonamedufus said…
Oh exploding bottles are all the rage. We didn't have plastic bottles when I was a kid. Or plastic money for that matter.
10 June 2012 at 17:49