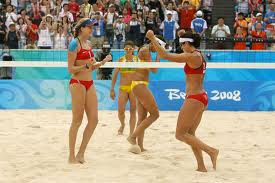 What could it be about this sport that makes me love it so much? I love watching NFL football but it doesn't come close to this. I enjoy watching golf but again it can't compare. Hockey? Sure. Baseball, yeah. Curling? Come on. I may be Canadian but you think I've got rocks in my head? I like sports but that's just downright boring.

No this sport has a certain attraction for me. Maybe because it's about the sheer beauty and majesty. It has syncronization. It's a delicate ballet. It's easy on the eyes. And it's not really necessary to keep track of the score.

Oh and did I mention yet that the participants wear teeny tiny bathing suits. No I'm not talking about The Miss America Pagaent. I'm talking about women's beach volleyball.

You know a sport has really hit its stride when it worries about how to accommodate commercial sponsors and how to display their brand names. NASCAR cars and driver uniforms, for example, are plastered with ads. But let's face it, there isn't much room for itsy bitsy ads on teeny weeny bikinis. I mean you can hardly plaster a billboard on those behinds. If you could, I think you'd be watching another sport entirely, like...women's weight lifting.

But this is about to change. 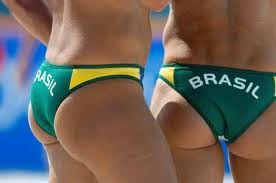 The Brazil team shows off their considerable assets

A British firm has come up with an ingenious way to cover, as it were, this dilemma. The company will assist that country's women's olympic duo in an upcoming match by stamping a bar code on their butts. Yeah, a bar code. When it is photographed on a smartphone the bar code will direct the user to the company's website.

Ha, I'm just thinking that there'll be a lot of people taking pictures of players' behinds. And this practice really gives new meaning to the phrase "turn the other cheek".

But good on them...so to speak.

Only dedicated enthusiasts of the sport such as myself know what the acronym stands for: Panties Stuck In Bum. 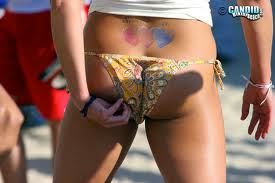 The heartbreak of PSIB

redheadranting said…
Well thanks for that image! No One should wear a Speedo, it doesn't matter how fit or well endowed you are.
15 August 2011 at 09:47

nonamedufus said…
Oh, I know. Mine's flat as a board. It's what comes from sitting through all those long and boring meetings when I worked as a bureaucrat.
15 August 2011 at 10:07

Nicky said…
Ahhh, the latest in marketing - the Assvertisement. Brilliant. Jepeto says thank you for the image of the Brazilian team. He agrees with your assessment.
15 August 2011 at 19:29

nonamedufus said…
Assvertisement. I love it. Wish I had have thought of that. I'm liking Jepeto more and more. Maybe we can get together to watch some volleyball some time?
15 August 2011 at 20:53

nonamedufus said…
Actually, the Brazil women's team is ranked 2nd after the Americans. I couldn't find a Canadian team. Of course when they play they play on ice floes and have to wear parkas and mukluks. Not nearly as interesting to watch.
16 August 2011 at 17:22

quirkyloon said…
I could have SWORN I commented on this post. But alas, I did NOT!

I think the zombies bit my brainz again or I'm boycotting any butt slices that DON'T have wrinkles! HA!
18 August 2011 at 22:48

nonamedufus said…
Where have you been, Quirks? Are you saying you're a little behind? Mwah-hahahahahahahaha...
19 August 2011 at 08:38