August 04, 2011
Here comes Peter Cottentail
Hoppin' down the bunny trail
Alas, 34 year-old William Falklingham may have hoped to emulate Mr. Cottontail but unfortunately he scared the bejesus out of little kids in his hometown of Salmon, Idaho. Salmon, Idaho? Is there something fishy going on here?
After several complaints from the public, police were hot on his tail (pun intended). Remember the movie Harvey with Jimmy Stewart? Stewart played a character who was the only person who could see his friend, Harvey, a giant rabbit. Unfortunately, for Mr. Falklingham, everyone could see him in his rabbit costume and occasionally a tutu, peeking at little kids from behind a tree.
Police say local residents were "greatly disturbed" by the man's activities. Although you might be correct in wondering just who is greatly disturbed. 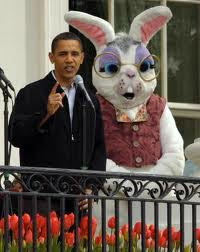 Wow he really is disturbing. So's that thing on the right!
But a neighbour stuck up for the guy saying "He's got the bunny outfit, a cowboy suit and a ballerina dress but you don't see him except where he's tripping through his back yard."
I think "tripping" may be the operative word there. Perhaps Mr. Falklingham was "hopped up" on an illegal substance. Regardless, police have now put an end to the guy's hippity hopping. I guess you could say hare today gone tomorrow.

Linda Medrano said…
Worse? This wouldn't even be considered mildly eccentric where I live.
4 August 2011 at 14:19

nonamedufus said…
Seem some pretty hare-raising outfits, have you? Some that make you paws and look twice?
4 August 2011 at 14:21

Linda Medrano said…
I have seen a fat young man in a playboy bunny outfit, complete with the fishnets and high heels. He had a beard too surprisingly. And this was not a costume. He was just going to the corner market.
4 August 2011 at 14:26

nonamedufus said…
Linda sometimes your comments evaporate. I have your latest one in my e-mail, but it never made it here. There's something freaky going on. Don't say I didn't "warren" you.
4 August 2011 at 16:18

nonamedufus said…
This was Linda's comment that somehow disappeared: "I have seen a fat young man in a playboy bunny outfit, complete with the fishnets and high heels. He had a beard too surprisingly. And this was not a costume. He was just going to the corner market."
4 August 2011 at 17:34

So that's the inspiration for the new FX series Wilfred.

But it doesn't stop me from watching it. heh heh

And I say it should be mandatory for everybody to don a bunny costume and tu tu around the yard once in awhile.

But that's just ME.