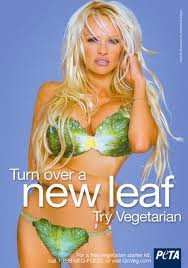 Nice to see the organization that draws attention to it's vegan ideology through half-naked women is taking the next logical step. A web site devoted to beastiality. What? It's not about beastiality? Oh, okay, you had me going for a moment there.

Apparently the only thing graphic about it's pictures will be "how animals suffer for entertainment". Are you sure this isn't about beastiality?

PETA says its "sexy side...will quickly give way to the sinister world of animal mistreatment uncovered by the group's hidden camera investigators. Yeah, I can really see how the two go together so well.

Now I know Mrs Dufus will heartily disagree, but my views on animal mistreatment focus pretty much on serving a "steak bleu" or offering "steak tar tar" to unsuspecting diners.

Speaking of "bleu", recently Brooke Hogan, female spawn of The Hulkster, did a photo shoot for PETA. The 23 year-old posed naked in a cage. 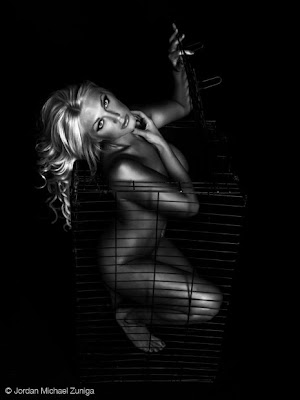 Having exposed herself, she then proceeded to expose her views of the experience:

"I hope it shocks [people] to see a human in the place of an animal," Hogan said. "It really shows how absurd that treatment is. ... We're all God's creatures. Just because we don't speak the same language doesn't mean [animals] don't have feelings too."

If we could just talk to the animals. I think Dr. Dolittle has some competition on his hands. It's okay, Doctor, you can keep your clothes on.

redheadranting said…
What else could it be but beastiality? I love animals but I really can't get behind PETA. Maybe if they hired A-list spokespeople instead of has-been or wannabees.
25 August 2011 at 10:09

Skeeter said…
Man, I work in the poultry industry. The extreme tree-huggers are a pain in my ass. Naked or half naked well maybe that will make them easier to deal with. Eat more chicken!
25 August 2011 at 10:41

nonamedufus said…
Whatever do you mean, Linda? Is that some kind of new board game you're talking about with those vegetables?
25 August 2011 at 12:38

Jaffer said…
"Keep her in the Cage !"

I love animals and I am always amazed by their intelligence. I cry when an animal unnecessarily suffers and I can't do nothing.

I would campaign against PETA for the unethical treatment of Women and Lettuce + the huge amount of other vegetables they waste - which would rather go to the hungry.
25 August 2011 at 12:54

nonamedufus said…
Good point Jaffer. But would you campaign against PETA with your clothes on or your clothes off?
25 August 2011 at 13:04

Jaffer said…
Clothes off ! Duh ! My campaign must need to cause more road accidents and deaths than PETA's
25 August 2011 at 13:07

Linda Medrano said…
I'm forming a new organization. You can send me some money for start up costs if you wish. I'm forming "PETV". That stands for People For The Ethical Treatment of Vegetables".
25 August 2011 at 13:20

nonamedufus said…
I'm not very big on vegetables. But you've certainly opened my eyes in terms of their versatility.
25 August 2011 at 13:58

nonamedufus said…
Yeah, If I campaigned in the nude I wouldn't stop traffic like those ladies do. I'd cause so many accidents because drivers would want to cover their eyes.
25 August 2011 at 13:59

nonamedufus said…
That really is the irony in all this, isn't it. You've hit the nail on the head, Nicky. Now if they used women's beach volleyball players, that'd be a whole different matter.
25 August 2011 at 19:24

Skeeter said…
A friend of mine was killed over the weekend while riding a 4-wheeler, he hit a deer. On our local news friends were posting comments to thenews story, and a damn animal rights fanatic posted, " what about how the deer's family feels, they lost a loved one while crossing the road" WTF, im a tree hugged too! I hug trees while climbing up them to kill deer for supper. The west wasn't won on salad!
25 August 2011 at 20:10

Janna said…
Whenever I do vegetarian week on the Jannaverse, nobody cares and hardly anyone comments.

I see now what I was doing wrong.