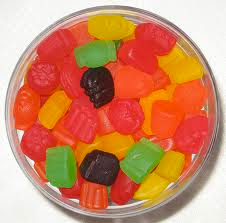 Last week I was at the grocery store, fulfilling one of my weekly husbandly duties that keep me in Mrs. Dufus' good books. You know, things like building decks, painting living rooms, cleaning the windows, re-roofing the house - not that I do any of those things, but they are good examples.

Any way, somewhere between cat litter and food waste garbage bags I came across a little confection that I used to love eating as a kid. Confection for those of you who can't keep up is a fancy word for candy.

I got home, unpacked and put away the groceries and then pulled out my guilty pleasure: a 950 gram tub of jujubes. As I merrily plopped one after another in orgasmic pleasure into my salivating pie-hole - I didn't have to worry about how many I ate because they were fat free -- yippee! - I started to think (uh-oh) about what I was eating and where they came from.

Jujube (pronounced /ˈdʒuːdʒuːb/ or /ˈdʒuːdʒuːbiː/), or jube, is the name of several types of candy, varying in description on a regional basis. The candies can vary in texture form being hard and resinous to something similar to firm loukoum or gummy candies.

In the United States, Jujubes is the brand name of a particular type of candy, whereas in Canada the word is generic, and describes any of many similar confections.

Pronounced what? Whatever. But they appear to be more popular in Canada than in the United States, having already hit generic status. You know like Q-tips, Kleenex, Jello, Canadian dollar? Anyway, my interest was peaked. Speaking of which I was by now a little peaked myself having eaten half a tub of jujubes.

Where did the name come from I wondered? Did some Jewish guy wandering the desert carry a bunch of jubes in his pocket to enjoy as he sought a homeland? And upon finding it, he shared them with a non-Jewish fellow who said "Hey, I guess those must be jujubes." Little did either of them know that many years later that simple act of sharing would result in jujubes being non-denominational.

The Beatles liked jujubes, so much they immortalized them in the song I Am The Walrus. You know how it goes:

That was a really popular song in its day. But not as popular as jujubes.

But the Beatles weren't the first to croon about their favourite candy. Frank Sinatra was encouraging his fans to share them with him when he sang:

I don't know what that last part was but Frank was a little weird now and then. In fact they used to say he was often saying something stupid.

nonamedufus said…
Oh, I love gummy worms too. That's what I bought last week. I had to look up Mexican Hats. Must be an American (or Mexican) thing. I don't remember them growing up in Canada.
22 August 2011 at 11:56

nonamedufus said…
Oh, I love gummy worms too. That's what I bought last week. I had to look up Mexican Hats. Must be an American (or Mexican) thing. I don't remember them growing up in Canada.
22 August 2011 at 11:57

Linda Medrano said…
Alex loves Jujubees. I used to eat them as kid, but only in the movies. They are a little yucky truth be told.
22 August 2011 at 14:20

nonamedufus said…
Yucky? Are we talking about the same thing? Chewy, gooey, and delicious? I love them. But I go through phases. My last phase was spearmint leaves and before that it was red licorice twizzlers.
22 August 2011 at 14:50

nonamedufus said…
I love those too! I can't make a detailed comment right now. I finished off the jujubes and now I think I've got the trots.
22 August 2011 at 17:07

Nicky said…
I can't eat those things. They are delicious, but they stick to my teeth for days and no amount of brushing and flossing can get rid of them!!!
22 August 2011 at 17:50

nonamedufus said…
I know just what you mean. But at my age it actually helps keep my teeth from falling out.
22 August 2011 at 22:32

LOTGK said…
Technically, they were Jujube's shaped like Mexican hats, but just a slightly less sticky texture.
23 August 2011 at 08:23

nonamedufus said…
Yeah I saw pictures of them. I like the idea of less sticky. But you know those hats are way to small to fit on anyone's head.
23 August 2011 at 11:30

PS: this made me laugh out loud:

nonamedufus said…
Oh, so when you play "here's the church, here's the steeple, open the doors and here's all the people" the people are all wearing hats!
23 August 2011 at 13:43

Nonamedufus said…
Oh, okay. So then when you give someone the finger you're being kinda polite because the finger's wearing a hat?
23 August 2011 at 19:32

nonamedufus said…
The only two things I know in Spanish are "areba, areba, andele, andele" and "cerveza" and I usually use them together.
24 August 2011 at 09:25

LOTGK said…
Continuing the thread on Mexican hats:
nonamedufus says...The only two things I know in Spanish are "areba, areba, andele, andele" and "cerveza" and I usually use them together.