The Most Miserable City in the United States

February 23, 2010
Poor Cleveland.  Who knew it sucks to be Cleveland?  The Mission Statement from the city's web page states:


We are committed to improving the quality of life in the City of Cleveland
by strengthening our neighborhoods, delivering superior services,
embracing the diversity of our citizens,
and making Cleveland a desirable, safe city in which to live, work, raise a family,
shop, study, play and grow old.
Not the most thrilling look at the future.  It's kind of like they knew there was a thing or two wrong with the old home town.

But the Rock and Roll Hall of Fame is there.  Drew Carey is from Cleveland.  Lebron James and Shaq play for their basketball team.  And, my favourite Christmas movie, A Christmas Story, was filmed there. 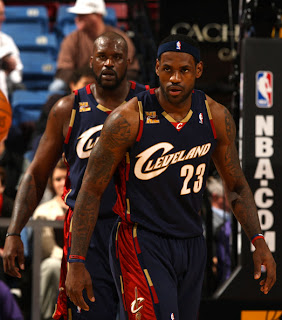 But apparently none of that's good enough for Forbes.com.  They've conducted a poll that rates Cleveland the most miserable city in the United States.

The city's nickname didn't help either:


The mistake by the lake.
The city's reigning (get it?), over-taxing, corrupt politicians where mediocre sports teams play may want to think about changing that mission statement. 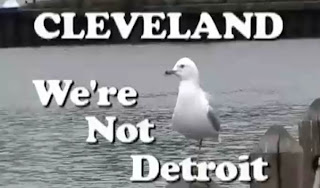 nonamedufus said…
Moooooog: That was hilarious and totally explains the outcome of the forbes.com poll!
23 February 2010 at 07:46

nonamedufus said…
UR: There is no most miserable place in Canada. We just enjoy sitting back and laughing at you Americans. But don't tell anybody. It'd spoil our image.
23 February 2010 at 07:48

Alan Burnett said…
We keep having "the most miserable town in Britain" contests and most of my local towns have won it at one time or another. Personally I quite like the sound of Cleveland.
23 February 2010 at 08:13

Donnie said…
I've never heard anything nice said about Cleveland, but I do remember when they had the best running back in pro football playing there-Jim Brown!
23 February 2010 at 09:22

nonamedufus said…
Don: He was a hell of a player and some of his records still stand. But the Browns never seemed to return to that kind of greatness, never going to the Super Bowl after the league merger in 69. Sad.
23 February 2010 at 09:54

Ziva said…
What's a Cleveland? Never heard of it. Is it anything like Disneyland? Cause I visited the one in France and it was pretty decent. Hardly miserable at all, really.
23 February 2010 at 10:57

Anonymous said…
A Christmas Story? That is MY all-time favorite Christmas movie!

So Cleveland's the most miserable, eh?

nonamedufus said…
Ziva: Nothing like Disneyland. It's a mid-western manufacturing city hard hit by the economy...and miserable.
23 February 2010 at 12:20

nonamedufus said…
thinkinfyou: I guess Cleveland invented the expression, "Nice place to visit - wouldn't want to live there"
23 February 2010 at 15:36

K A B L O O E Y said…
Hah! Thanks for the laugh. And two friends are trying to get us to join them for a little vacation in Cleveland this Summer, as they called to remind us today. Then again, a few days at the Rock and Roll Hall of fame then at a Yankee game we can possibly get into without going broke don't sound too bad.
23 February 2010 at 20:37

MikeWJ at Too Many Mornings said…
Note to Unfinished Rambler: It's Winnipeg, hands down. I've been there, and I ain't going back. I think I drove through Cleveland to get there, too.
23 February 2010 at 21:02

nonamedufus said…
Kablooey: Spread it out over two days. Otherwise it'll be an even shorter vacation!
24 February 2010 at 07:59

nonamedufus said…
Mike: That's the "coldest" place in Canada - the corner of Portage and Main. But Winnipeg isn't miserable. They have a football team (Canadian, I know) and there's a rumour they're going to get their hockey team back.
24 February 2010 at 08:04