Sometimes Packages Can Be Deceiving

February 15, 2010
Okay.  We had the guy with the explosive underwear, remember?  Remember?  Yeah, you know, the guy they asked "Is that a bomb in your pants or are you just glad to see me?"

Well, get this.  Men in Britain can downgrade that bomb but still be able to beef up their briefs.

You might say these are underpants that enhance, if you get my drift.  They're sure to get a rise between the thighs and a reaction from your girl...up to a certain point.

The underwear are advertised as "anatomy-boosting".  Uh-huh.  They work the same way as a woman's cleavage-enhancing Wonderbra in that they use a "lift and hold" feature in the front. 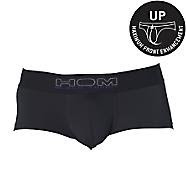 Who would have thought?  Package-enhancing underwear for men.

The department store stands behind its product...as long as they're worn.

They won't be held responsible for the let down, I guess you could say, once the pants come off.

Or should that be good "brief?"

And that's what the world really needs is another phallic booster, cuz it's been basked over so many times!

Mama-Face said…
Well, Us women have had the padded push up bra for years. Not that I know anything about that...just saw some ad somewhere.
15 February 2010 at 09:10

Deb said…
Finally. An alternative to bananas in your pants, which will no longer result in that "ripe" smell. Wait. No fruit is involved in this, right?
15 February 2010 at 09:33

nonamedufus said…
mama-face: Wouldn't a guy have to wear tight pants to have an impact with this briefs? All sounds a little constricting to me.
15 February 2010 at 11:04

nonamedufus said…
Me-Me: Socks? I love the scene from Spinal Tap where the guy goes through airport security with a cucumber wrapped in tin foil that sets off the alarm.
15 February 2010 at 11:07

injaynesworld said…
If a guy really wants to impress me with a package, it had better be blue and have "Tiffany" written across it.
15 February 2010 at 12:21

Skye said…
"Comp" is my confirm word and generally speaking it stands for compensation. Are people really so insecure in themselves that they need these "package boosters"?

Ziva said…
I'm asking myself, why not just sell regular underwear but throw in a complimentary sock for everyone's viewing pleasure? And since you obviously wouldn't score with a girl while wearing a sock in your underwear, the sock could instead double as an aid when the mood strikes. Ingenious.
15 February 2010 at 13:24

Ziva said…
I was thinking more in the line of friction provider and load catcher. But I'm not a guy so I wouldn't know anything about that.
15 February 2010 at 13:48

Donnie said…
That's what bananas are for! Save your money and go with a big banana and two firm peaches. Whatever you have left after they shrivel can be served on your cereal.
15 February 2010 at 17:13

MikeWJ at Too Many Mornings said…
What, no link? You're actually going to make me Google these male enhancing underpants? I have a...erm...a friend who might be interested in a pair.
15 February 2010 at 23:43

nonamedufus said…
Mike: Don't get your shorts in a knot.

Unknown said…
Are people really that worried about their package? If I could find a descent man, I don't think I would worry about his package.
16 February 2010 at 15:25