February 16, 2010
Well let's see, now.  We started out with a winter Olympics with no snow.  Events on Cypress mountain were seriously in doubt as they trucked in snow from elsewhere.  Too bad Philadelphia or Washington, D.C. didn't win the Olympics.

At Whistler, fog and rain was such a problem that men's downhill skiing was postponed for two days.

In the opening ceremonies, the hydraulics for one of the four indoor cauldrons didn't work - kind of like an internationally-televised version of erectile dysfunction.  And speaking of dysfunction, what was that 15 minute Wayne Gretzky ride in the back of a pick-up all about? 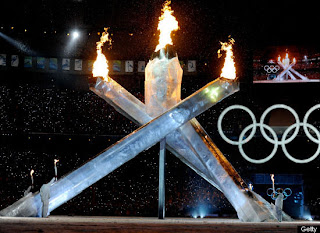 The talk at the Richmond Skating Oval is all about the "fair" quality of the ice because the facility is at sea-level.

And, of course - and sadly - a Georgian slider lost his life in a luge practice run.

Boy these Olympics got off to an auspicious start.

But observers seem to have looked past these adversities as athletes push swifter, higher, stronger in their quest for gold, silver and bronze. 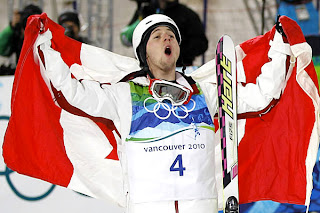 Canadian Olympics broadcaster CTV has really been hyping the crap out of "it's our time" in terms of never winning a gold at a Canadian-hosted Olympics - 76 in Montreal and 88 in Calgary.

Moooooog35 said…
Vancouver Olympics: Yet another reason not to trust the Canadians.
16 February 2010 at 08:16

nonamedufus said…
Moooooog: CTV, to fill time, was interviewing people in the street about who we should blame for the crazy weather and one guy said "Nickleback". That was MY Olympic moment. lol
16 February 2010 at 08:59

Anonymous said…
I won't tell you what went through my mind when I read "Flaccider."

Donnie said…
...And people actually want the Olympics in their community or state? When was the last time Olympics host city ever made a profit?
16 February 2010 at 13:25

nonamedufus said…
Don: I think it was LA. Quebec just finished paying off the Montreal 76 Olympics a year or so ago. The Montreal Olympic Stadium was called the Big O officially and the Big Owe unofficially.
16 February 2010 at 14:48

Dr Max Tunguska said…
At least the Canadians are out on the streets protesting about the Olympics. We're so downtrodden we can't be bothered to protest about the 2012 summer games.

nonamedufus said…
idifficult: And the authorities here, say they have the right to peaceful protest. It's amazing what the Olympics cost...astronomical.
16 February 2010 at 17:58

http://howtobecomeacatladywithoutthecats.blogspot.com said…
Awesome win by Alex. Congrats to all you Canucks!

(Maybe Me-Me could sing the national anthem for Mean Girl Garage's Out of Tune Tuesday competition.)
16 February 2010 at 18:18

nonamedufus said…
CL: Yeah and we just won another gold in women's snowboard cross this afternoon. WOO-HOO!
16 February 2010 at 19:13

Canadian Blend said…
I was in Vancouver on Valentine's Day. It was 49F (9C) and sunny.

The next day, back in Ohio, we got something like 6 inches of snow and the high was below freezing.

Vancouver is a couple hours south of Whistler but if all a person knew about Canada was what they saw at the opening ceremonies of the Olympics, they'd think Canadians shared a room in Superman's Ice Fortress.
16 February 2010 at 21:12

nonamedufus said…
Cdn Blend: Vancouver's had one of the warmest winters on record. The funny thing about the opening ceremony's ice fortress is it was all indoors!
16 February 2010 at 21:33

MikeWJ at Too Many Mornings said…
I can forgive the Canadians for the luge incident, the erectile dysfunctionality and the slush, which is a little out of their control. But can the Canadians forgive themselves for never winning a gold medal on home turf in hockey? I doubt it very much. The shame!
17 February 2010 at 17:31

Canadian Blend said…
I was in Vancouver on Valentine's Day. It was 49F (9C) and sunny.

The next day, back in Ohio, we got something like 6 inches of snow and the high was below freezing.

Vancouver is a couple hours south of Whistler but if all a person knew about Canada was what they saw at the opening ceremonies of the Olympics, they'd think Canadians shared a room in Superman's Ice Fortress.
12 May 2011 at 14:55