This Guy Got A Bang Out Of Smoking 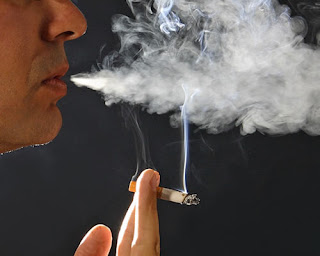 I've been smoke free for about 15 years now.  That's some accomplishment.  I began smoking when I was barely out of knee-pants.  At 13, my father - a several pack-a-day man - philosopher that he was, told me he'd give me his permission but not his approval.  Good enough for me.  A 30-year habit was born.

There were many times I attempted to snuff out the dreaded weed.  Cold turkey, gum, patches - you name it, I tried it.  Once I quit for a year, only to start again at a party.  Stupid.  And expensive.  And in my teens I recall emptying out the ashtrays after a party and grinding the hard, stale tobacco into a pipe bowl to smoke because I'd run out of cigarettes.  Oddly, that didn't make me quit.  It just made me go out and buy a pack of smokes.

Well, I tell you maybe I would have quit if something like this had happened to me.

Some poor guy in Indonesia, where men apparently light up cigarettes more often than their libido (60% of Indonesian men smoke), got a big bang after partaking of his sickly addiction.  No, not the Tiger Woods big bang kind of addiction.  This guy lit up a cigarette and...BANG...it exploded...in his mouth.  The poor fella lost six teeth and lived to tell the tale.  Although, we're not entirely sure he could talk after the mysterious mini explosion.

The tobacco company has agreed to pay the man's medical expenses.  Wow, and Toyota thought they had problems.  Imagine a cigarette manufacturer who's product blows up in your mouth.  I'd hate to be the crisis communications firm in charge of that account.  Or maybe they could turn this to their advantage and rebrand their image.  Imagine the advertising slogan.  Something like:


"TNT cigarettes - more bang for your buck!"
Or maybe they could get into niche marketing:


"TNT - the cigarette trusted by terrorists"
I guess that's too much of a niche market.

The fella involved says he's decided to give up smoking.  Hmm...I wonder what convinced him? 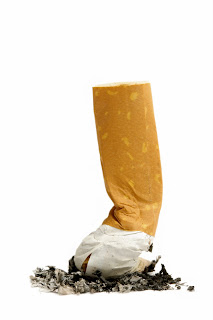 Donnie said…
That would be a good way to stop, or at least repress, the bums around here that panhandle. They all ask for cigarettes. That would be too good to be true. Light it and weep.
9 February 2010 at 09:14

And I can't believe you were an "ashtray diver"!!!

Dumpster divers ain't got nuttin' on you!

Me-Me King said…
Yikes! This reminds me of the cigarette loads which were around during the 60's and 70's...ka-bang!

I quit smoking years ago, but once a year I buy a pack, smoke 2 or 3, then I either throw the pack away or give it to a friend who still smokes.

BTW, Thank you for the Best Follower Award, I've answered all the questions on my blog today!
9 February 2010 at 11:23

nonamedufus said…
Me-Me: Since the last time I quit I've slipped once or twice, smoking a couple of cigarettes each time. And each time I turned green...worse than a hangover.

http://howtobecomeacatladywithoutthecats.blogspot.com said…
I suppose it's a little difficult for him to smoke now that he has not lips or teeth. I chain smoked for two years in college, but that's it. Then I switched to Dr Pepper and that's all she wrote. (I'd be a lot thinner if I'd stuck with the cigs.)
9 February 2010 at 13:08

nonamedufus said…
CL: Yeah that's true, smoking's a great appetite suppressant. And yet there was nothing like a cigarette after a great meal...or after waking up, or while shaving, or while driving, or while having a coffee, while drinking. Gee, and I quit again why?
9 February 2010 at 13:11

Tgoette said…
Wow, cool story! An explosive cig would be a novel way of quitting, though it would probably only bring those long cigarette holders back into vogue again.
9 February 2010 at 15:50

nonamedufus said…
Tgoette: I hope smoking goes out of fashion before those long cigarette holders come back.
9 February 2010 at 16:14

Mama-Face said…
This is weird cuz I was thinking just this morning about how long it took for my Mother to quit smoking...30 years! Weird because I don't know why that popped into my mind. Anywho.

nonamedufus said…
mama-face: About the length of time I smoked. Guess you could say it took ME 30 years to quit. Talk about weird. I started on Matinee. Graduated to Rothmans. Moved on to Players. Finished up with Export 'A'. Canadian cigarettes, eh.
9 February 2010 at 17:16

MikeWJ at Too Many Mornings said…
That is a weird story, and I hate it when things explode in my mouth. Wait. I didn't mean that like it sounded. I'm not gay. Although there's nothing wro.....Oh, never mind. I've dug myself into a hole, and I'm stuck there.

injaynesworld said…
When I was like 14, my mother put a carton of Spring cigarettes in my Christmas stocking. I find that odd to this day.

nonamedufus said…
Mike: I think there's a gum they advertise with flavour that explodes in your mouth. How about we stick with that?
10 February 2010 at 08:00

nonamedufus said…
Jayne: Yeah, starting young your parents always knew what to give you for Christmas and birthdays - a carton of cigarettes! Strange times.
10 February 2010 at 08:03

mama-face said…
This is weird cuz I was thinking just this morning about how long it took for my Mother to quit smoking...30 years! Weird because I don't know why that popped into my mind. Anywho.