My Dinner Without Andre

February 02, 2010
I was out for dinner the other night with two of my favourite people - my son and my wife.  We were at my daughter and her husband's restaurant and unfortunately she was working but at least we were one of her tables so we got to chat now and then.

I should explain my kids are from my first marriage but they get along swell with my wife.  Anyway, so my son, my wife and I are having a relaxing time, shooting the breeze - it was kind of like that movie My Dinner With Andre, except without Andre - and all of a sudden the switch clicked.

Has that ever happened to you?  For no apparent reason the conversation takes an abrupt 90 degree turn and those engaged are reduced to giggling nincompoops.  Well, it happened to us.  In my family it happens a lot, with or without the influence of alcohol - and the other night none of us were drinking.  And what started as a discussion about movies we'd seen ended on how we'd like to deal with some people we disliked.  Go figure.

But there is a difference when the French watch television.  They say "J'ecoute la television, which means literally "I listen to the television".  So, often, a French person speaking English will tell you "...last night I listened to House (or Law and Order or...you get the idea).  Well this has always struck me as funny and my comeback would often be something along the lines of, "Is your TV broken?"  Or, "You're not getting your money's worth".  Or, "Doesn't your TV have pictures?  Mine does."  Or, "Why don't you turn the picture on?"  Or, "You'd save yourself some money if you just bought a radio!" 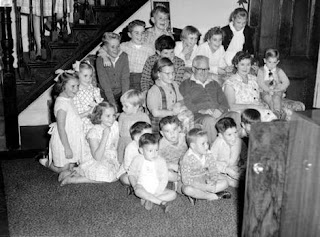 A typical French-Canadian family "listens" to television.
From there my wife told us when she was learning English she was quite taken by the introductory phrase of "How do you do?"  She said she was anxious to try it out but reluctant because she was worried people would actually tell her how they were.  So instead of taking that risk she went with "Pleased to meet you" the French equivalent of "enchanter" (on-shawn-tay).

Well this got us going on how silly English was.  Imagine having to ask someone how they were doing, particularly of someone you didn't like and really could care less.

Which brought us to the thought of what if you could really tell someone what you thought of them while being introduced.  You know like when some snotty type responds to your "It's a pleasure to meet you" with "Oh, the pleasure's all mine."  Next time you run into one of those types why don't you try saying: "Oh, make no mistake about it, you've got that right!" 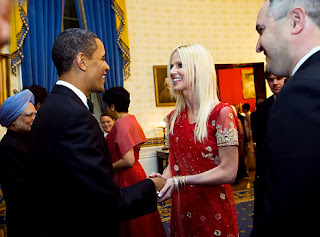 The pleasure was all hers.

Donnie said…
In college I rented a house with a Cuban, Panamanian and Ecuadorian Indian. They spoke "English", and I spoke "Spanish". What a farce. Even the Panamanian would have to translate the Ecuadorian to the Cuban. I was left to fend for myself.
btw-my word verify is "troutly". Sounds like a gentleman's gentleman's name-Mr. Troutly, sir.
2 February 2010 at 09:13

nonamedufus said…
Mr. Troutly: Language can be a funny thing. Try explaining to people, for example, why we drive on a parkway and park on a driveway or why we get on an airplane instead of in an airplane. Huh!
2 February 2010 at 09:21

Think they would crash a plastic surgeon convention or something. At least get a freebie out of it.
2 February 2010 at 09:49

Mama-Face said…
Haha. I love that uncontrollable laughter that hits at times. Especially if I'm with someone.

Me-Me King said…
In 1967 our family made the trek from Arkansas to Expo '67 in Montreal. Imagine our surprise when we turned on the TV and watched The Beverly Hillbillies which was dubbed in French. It was hilarious!!!!

Gianetta said…
I still have hat problem down here in the South when I speak with my Yankee tongue...all carbonated beverages are not Cokes.

nonamedufus said…
Moooooog: She and her husband are a couple of boobs. Close enough.
2 February 2010 at 12:36

nonamedufus said…
MAFW: It's a great game sometimes over a drink or two to get into why we say some of the things we do. Imagine an immigrant trying to learn English. Victor Borge the pianist/comedian used to do wonderful things with/to the English language.
2 February 2010 at 12:44

Me-Me King said…
Yeah, well I thought you looked familiar. Funny thing about being in Montreal with our southern accents, all the vendors loved it when we said, "Merci beau coup, y'all".
2 February 2010 at 12:45

"How do I do what? Be specific, please."

Barry Knister said…
If memory serves, the French greeting is comment allez vous, or how go you, or more fairly rendered in English, how do you go?
How do I go? The question would seem to be both rude and unnecessary, since as a man I can pretty much be assumed to go the way the great majority of males do: in the standing or sitting position, depending on the demands of the moment. Then there's the more famliar "Ca va?" which, again more or less means "How's it going?" Here once more, there seems little reason for the question, unless a urologist asks it of a patient with bladder problems.
2 February 2010 at 15:26

Kelly said…
Damn, that is one big-ass typical French-Canadian family. Pere & Mere must go at it like a couple of lapin. Doncha like my Franglish?
2 February 2010 at 15:29

nonamedufus said…
B&B: ha,ha. You're absolutely right. Even in English "How's it goin'" is a bit of an odd greeting and is more for when you see someone you know and not someone you're meeting for the first time..
2 February 2010 at 17:18

nonamedufus said…
Kelly: I thought that pic was hilarious. And your Franglish is first rate. I wonder if there are what we used to call "rabbit ears" on the TV.
2 February 2010 at 17:21

Anonymous said…
So how do you "dun, dun" in French?

Canadian Blend said…
I met a couple in their 30's. He was Czechoslovakian and she was Russian. Neither spoke the other's native tongue, so they used English at home.
3 February 2010 at 13:58