Who Was That Masked Man?

February 08, 2010
My cancer treatment was stepped up somewhat last week when I visited the hospital for a scan.  The scan is one of several in preparation for radiation therapy or,  to be precise, what's called tomo therapy.  This is pretty leading-edge stuff.  It was developed at City of Hope Hospital in California and has only been performed for several years.  My hospital is the only one in Canada doing this therapy and according to my doctors I am only the second person in the country to undergo such treatment.  Heady stuff.

My dear wife drove me to the hospital for the scan.  I changed into a hospital gown and waited for them to call me.  In the scan room I met about 5 different technicians, including a student technician.  The procedure was explained to me by one of the technicians.  The first thing they would do would take a mould of my body, from head to toe.  The idea is to develop the mould so I won't move when the radiation is precisely targeted at my body.  They use two canvas-like bags, one for the upper body and the other for the lower body, filled with tiny styrofoam chips and then blow it with air to form the mould.  So far, so good.  No problem.

The technician had said something about a mask but I'm afraid I wasn't catching it all.  The room, the machine, the people - it was all a little much to take in.  Until they told me to close my eyes.  Okay.

Yikes!  What the hell is that?  It felt like warm silly putty all over my face and head.  And I couldn't move. I had to keep my body and head perfectly still.  Okay.  I can do this.  I'm a big boy.  Hey, I can breath through my nose.  But I've got to swallow.  And my cheek itches.  But I can't move.  How long is this going to go on for?  I could feel my blood pressure rising.  I was getting increasingly claustrophobic.  All I could think of was Terry Sawchuk.  Remember the goalie?  The first goalie to don a mask?  I kept wondering "How the hell did he wear one of these things?"  This has to end soon.  Would you believe it went on for an hour. 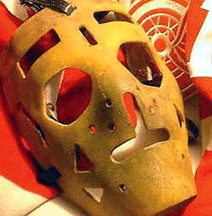 Yep, this wasn't just a session to make a mould that could be used for future radiation sessions.  They were doing a PET scan.

Finally, it was over.  They let me go.  I breathed a sigh of relief.  I went and got dressed.  As I opened the dressing room door to leave, who should be waiting for me but the student technician.  Guess what?  Now they wanted a CAT scan.  Um, would I have to wear the mask?  Uh, yes, we're afraid so.

Ah, but this time I saw the mask.  I don't know where I got the stupid idea it was silly putty.  It was actually like fibreglass strips.  Ah, that's not so bad.  And it wasn't.  The second scan, with the mask, took about 10 minutes. 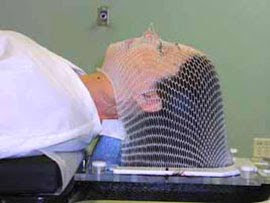 I've got to go through this one or two more times before the radiation.  Using laser beams, the mould,  and, yes, the mask the doctors want to be certain the cancer is precisely targeted during radiation.  Those sessions, likely in about a month or so, will last a couple of hours, twice a day, for about 4 consecutive days.  And you know what?  I might just open my eyes.

http://howtobecomeacatladywithoutthecats.blogspot.com said…
It's amazing how much pain we can take, but asking us to sit perfectly still makes us totally crazy! Sending good thoughts your way, Dufus, that this is the thing that will take care of your cancer for good. Hugs!
8 February 2010 at 07:39

nonamedufus said…
CL: Fear of the unknown, I think, is to blame. Now that I know more about the process I hope things will go a little more smoothly.
8 February 2010 at 08:40

Donnie said…
Thanks for the update, and I hope there's further progress with this new method of radiation treatments. Sounds really weird though. I'm not claustrophobic and I've had cat's and mri's and I can easily understand how this could make someone who is even slightly claustrophobic a screaming idiot! Pass the Xanax please.
8 February 2010 at 10:36

nonamedufus said…
Don: I have stem cells on ice from my last transplant 2 years ago. After 4 days of radiation 2x a day they'll give them back to me. Then the fun begins in terms of nausea, etc. Recovery will likely take a couple of months. Hopefully this will eradicate the cancer for a few more years. I went 2 years cancer-free (relatively) the last time.
8 February 2010 at 11:08

Anonymous said…
Writing down to myself: "Do not EVER agree to TOMO therapy."

I AM a claustrophobe and that sounds horrendous.

I'm glad you got more resilience than I do.

You are a trooper.

I'm a big baby. I figure they've put me through enough torture with awful side effects, when are they going to start making it NICE and more comfy for ME!?

Whitey said…
I sense a business opportunity here. Why not take the full-body mould and start creating lawn ornaments? The flamingo and the penguin are so tired, but a dufus? Can you imagine 40 or 50 or 60 dufuses on a front lawn? Heck, you could create talking dufuses, each of them with a different pun.

On second thought, maybe they should break the mould.

nonamedufus said…
Whitey: Maybe they should break the mould. I'd hate to be reminded of the expression I had on may face...and the explosion I nearly had in my pants.
8 February 2010 at 12:06

Me-Me King said…
Dufus, here's wishing you a painless and speedy recovery. You are in my thoughts and payers daily.

nonamedufus said…
Me-Me: Thanks, Margo. I appreciate the sentiment and support.
8 February 2010 at 13:12

Kelly said…
Anyone who manages to work in a reference to one of the greatest goalies in hockey into a story about his cancer treatment gets an "Atta Boy" from me.

Skye said…
Ok Dufus, my first thought when I saw that mask was of Hannibal, not the goalie. Sorry Man, must be because I just watched "Hannibal" last night for the umpteenth time!

Anyway, I do hope that you go through this radiation treatment unscathed (so to speak). Take care my friend, all the best to you and yours!
8 February 2010 at 15:10

Joel Klebanoff said…
Noname, as horrid as it sounds, I'm glad you're able to get the treatment. All the best. Beat this thing!

nonamedufus said…
Kelly: Thank you ma'am. Funny where our minds go when a little fear raises its ugly head.
8 February 2010 at 16:20

nonamedufus said…
Skye: Thanks. I didn't think of Hannibal, but now that you mention it the mask is very similar. Hey congrats on your win over at Margo's last week!
8 February 2010 at 16:21

ingaynesworld said…
Well, that just totally sucks scissors. I firmly believe that cancer is a nice person's disease. I swear, I've only ever known nice people who get it. Rat-bastard-motherfuckers? Never. I'm sorry you're going through this. Watched my mom go through it, too. Yep. It sucks scissors.

Unknown said…
It never fails that as soon as I am not supposed to move, I get an itch. Best wishes that the mould making goes quickly and they targetthose nasty cells.
9 February 2010 at 20:52

MikeWJ at Too Many Mornings said…
And I thought I had problems. To be honest, this procedure sounds horrible, NoName. I can't stay that still when I'm watching TV. I can't imagine doing it during a 2-hour scan, let alone multiple "procedures." You're one tough dude. I will be thinking of you a lot for the near future, NoName. I have heard that this surgical raditation treatment works bettr than the alternatives (they do it here in Denver). Keep your eyes wide shut.
10 February 2010 at 00:57

nonamedufus said…
Mike: Thanks for the good wishes Mike. I appreciate your support. My commenters have been a source of strength, believe me.
10 February 2010 at 07:44

ingaynesworld said…
Well, that just totally sucks scissors. I firmly believe that cancer is a nice person's disease. I swear, I've only ever known nice people who get it. Rat-bastard-motherfuckers? Never. I'm sorry you're going through this. Watched my mom go through it, too. Yep. It sucks scissors.

Skye said…
Ok Dufus, my first thought when I saw that mask was of Hannibal, not the goalie. Sorry Man, must be because I just watched "Hannibal" last night for the umpteenth time!

Anyway, I do hope that you go through this radiation treatment unscathed (so to speak). Take care my friend, all the best to you and yours!
12 May 2011 at 15:18