September 11, 2009
In Canada we have a commercial that runs at this time of year for Office Depot with the song It's The Most Wonderful Time Of The Year and I laugh every time I see it 'cause it's the furthest thing from the little rug rats' minds as mom takes them through the store buying school supplies.

This year more than just the kids went back to school. A few politicians entered the hallowed halls of learning. President Obama's trip to the classroom met with mixed reviews. 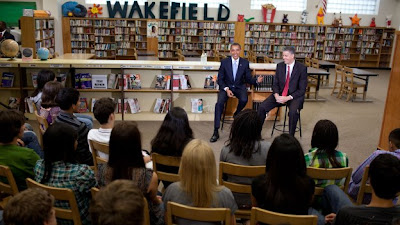 A seemingly innocuous and apolitical speech to 9th graders about the importance of an education was slammed by his right-wing critics before he even gave it, who accused the White House of political interference and attempting to sway public opinion on the health care debate. Said Florida Republican chair Jim Greer, "President Obama has turned to America's children to spread liberal lies, indoctrinating America's youngest children before they have a chance to decide for themselves."

Wow, and he believes that shit? That's right folks, the President is taking over the minds of America's youth. Next they'll accuse him of selling them on the benefits of socialism. 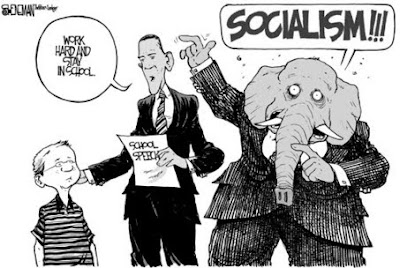 Meanwhile in Canada, Ontario's premier Dalton McGuinty went back to school this week, too. In Canada, a provincial premier is like a state governor...minus the extra-marital affair. Did he have an inspiring message to pass on to his province's youth? A stirring oratory on the advantages of a higher education? An announcement, maybe, of his government's investment in building more schools or enriching the curriculum?
Ah, well, no actually. He was there to wash his hands. Yep, he was teaching first-graders the proper way to scrub their hands so as to minimize their chances of catching swine flu. Was he criticized for warping young minds, for spreading socialism? Far from it. And in the school of public opinion McGuinty's grades are higher than Obama's, hands down. 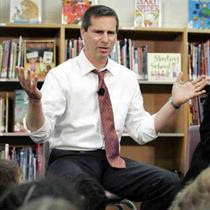 Anonymous said…
...you put your right hand in and you shake it all about! You attempt to silence the critics and to them you give a shout..."You don't what you're talkin' about!"

nonamedufus said…
subby: As a neutral northerner I can only laugh at some of the criticisms of your Mr. Obama. It's quite surreal for me.

CatLady: To steal and paraphrase a joke had washing will lead to socialism when pigs fly. Oh yeah, swine flu!
11 September 2009 at 10:16

I, too, didn't understand the hoopla about the Obama speech.

And I am a conservative, but I thought the extreme right wingers were just ridiculous!

And hey as the Mom of a five year old? Teaching them and reminding them to wash their hands properly?

nonamedufus said…
Quirks: On the other hand...are 5 different fingers.

MikeWJ at Too Many Mornings said…
Brilliant post, Noname! In the words of Yoda, "A Dufus you are not."

I would say that I'm neither liberal nor conservative, but I'm so sick and tired of the right-wingers in the U.S., who not only seem dumb as posts to me but even more anxious than liberals to indoctrinate young minds with lies, that I've seriously considered moving to the more neutral land of Canada. I like the food up there, the hockey's great, health care's affordable, vacations are long, the standard of living is high and your political leaders aren't beneath teaching kids how to wash their hands properly, which is probably more important than almost anything else we learn in life.

I swear to you, this latest flap over Obama's speech to kids had me digging through my files for my passport.
11 September 2009 at 15:11

nonamedufus said…
MikeWJ: Stay away from Toronto ;) Ottawa's nice this time of year.

Donnie said…
Well, quite a few presidents have spoken to school kids. Bush Sr. was one of them. Having said that Obama can kiss my ass! Politicians of any persuasion piss me off.
11 September 2009 at 15:23

nonamedufus said…
Don: You make a good point. Both Bushes spoke to school kids; Reagan too. And none experienced the reaction Obama has. What the heck is the problem? It's all very silly.
11 September 2009 at 16:19

Joel Klebanoff said…
Yes, kids here (I'm in Ontario; DON'T stay away from Toronto) may drop out of school, but at least they'll have clean hands when they do.
11 September 2009 at 16:50

311 is the number they gave on the news last night. Other times I've heard much smaller numbers and still others much larger. I wish they could make up there minds and decide for sure the actual toll!
12 September 2009 at 08:55

nonamedufus said…
HHS: You know you're right. Politicians on both sides have really gone too far and have alienated the electorate in the process.

Skye: An excellent point and thanks for the figures to back it up. Approx 63,000 deaths from influenza vs approx 300 for swine flu. Swine flu isn't the problem. Another animal, all the chicken littles crying the sky is falling is the problem.
12 September 2009 at 10:02