September 01, 2009
You know lately I find the real political news funnier than any satire or parody of politics. The funniest thing of all is how the tide of public opinion has turned for Barack Obama. Not so much how as why. The poor guy continues to get a rough ride from right of center America and the "I smell trouble, let's exploit it" American media.


First there were the "birthers" who shouted from the rooftops that Obama wasn't born in America. Come on! Of course not, he was immaculately conceived.


Now there are those who oppose his health bill and liken him to Hitler, saying Nazi Germany wasn't unlike what Obama's trying to do: turn America into a socialist nation by doing what the Nazis did - taking over the auto industry and the health system.


And people believe this stuff.


What they forget is if anyone's acting like Nazis they are: purpetrating "the big lie". The funniest part of this whole health "debate" centres around so-called death panels which critics say will kill off their grand parents. Really? Yeah, let's put 'em out of their misery.


Sarah Palin (Sarah who?) has even waded in, disturbing her daily view of Russia, to say such panels would kill her downs-syndrome child.


Man if you believe all this I've got some swamp land in the Florida everglades I can sell ya. 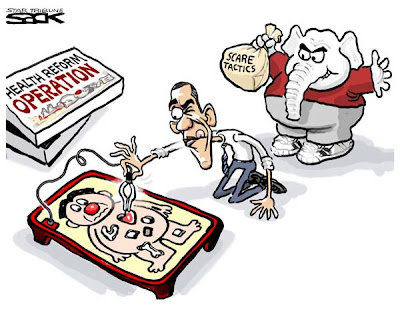 At least in Canada we don't have to make stuff up to attack our government. Oh no. In Canada, our government excels at screwing itself.


The latest example occured when Prime Minister Harper travelled to the Arctic to wave the flag, demonstrate our nation's sovereignty over the north and what one newspaper said "to participate in the most expensive photo-op ever". Yep, his own office got in deep shit. Literally.


The PM was set to visit Iqaluit, the capital of the northern territory of Nunavut as part of his Eskimo-wannabe excursion. In their excited rush to share the news with the media, the Prime Minister's Office issued a news release saying he was going to Iqualuit. A slight spelling error, right? No one will notice, right?


The PM was left with egg on his face. Or, um, ah, maybe something much worse! 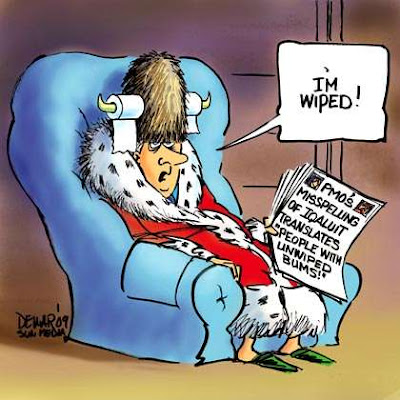 Anonymous said…
Ha! Actually egg on face is quite tasty.

Not that I would know anything about that!

nonamedufus said…
Quirks: If you can't laugh at them you're in trouble.

Frank Lee MeiDere said…
Hmmm. Two such different meanings with the simple change of a "u" after the "q" -- which is itself an English convention? That seems pretty unlikely to a You're a Peein' -- I mean, European.
1 September 2009 at 21:51

nonamedufus said…
Frank: The twits in the PMO press office make one gaffe after another. You'd think someone would have double-checked the spelling. They continie to give me stuff to write about, though.
2 September 2009 at 07:08

MikeWJ at Too Many Mornings said…
It's great how one small letter can make such a huge difference. All I can say is thank God for politics, because it makes our work easy.
4 September 2009 at 01:39