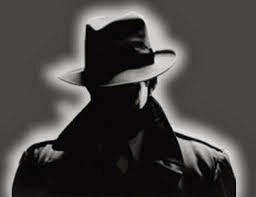 I had to accelerate my efforts. Time was running out. However if my hunch was right my Captain Silver would soon have nothing but time on his hands. But a hunch wasn't good enough. I needed proof.

Now, I'm just your every day average hard-boiled homicide detective. I usually rely on underworld contacts and snitches for information. They're usually pretty reliable but getting the information can take  time and be a bit expensive.

I needed something quicker. I borrowed Dylan's laptop and started exploring. She had something called social media sites and plenty of them. I couldn't really get why they called it social media when people all talked to each other on computers and not face-to-face. To my mind they should have called it  unsocial media. Especially with the rate of exchange between the American and Canadian dollars.

Anyway, I Googled John Silver and one of the entries took me to something called Facebook. What's this? Among his friends were Ned, Lucky and Dusty Amigo as well as Joe Blow and Trigger Raynes. This can't be right I thought. Why are all my contacts in this case all friends with Captain Silver? Not only that but I found photos in his timeline where he was tagged in pictures with all these drug lords. They were all heavily armed and stood behind a table piled high with white powder.

The capper was a picture of Silver and Rob Ford jaywalking in Vancouver.

Now this was interesting. And then I found the most damning evidence of all. A recent status update of Silver's read "Thanks for taking care of Gouda's snitch Dusty and Lucky. He'll never catch on to us now."

I was confused. This case was quickly turning into an episode of True Detective.

I was stunned. I'd known Silver for 20 years, in good times and in bad, and always thought him to be a stand up guy.

But now I was sure Silver was tarnished. A bad cop. How long had Long John been mixed up with this? However long it was about to end if I had anything to do with it.

Woah, this is getting exciting, eh? That's it for today. Find out how exciting my blogging friends are by clicking over to We Work For Cheese and seeing how they dealt with today's prompt.

Cheryl said…
While understanding the power of social media is tantamount, the anti-social I was referring to had more to do with the change in people's behaviors during election years. Downright frightening in the States.
25 February 2014 at 09:21

nonamedufus said…
I thought during elections all kinds of promises are made. A very sociable approach. It's once they're elected they seem to forget these promises and they become anti-social.
25 February 2014 at 10:47

nonamedufus said…
These days we send texts instead of make phone calls and send self's on Facebook instead of seeing someone in person. Things were a lot different when I was a kid.
25 February 2014 at 10:50

nonamedufus said…
You know some people will post just about anything on that infernal social media without a thought to the consequences. And that's the moral of my story.
25 February 2014 at 14:01

Cheryl P. said…
I can understand the relationship to drug lords but the jaywalking is unforgivable.
25 February 2014 at 16:42