Bin There , Laden That 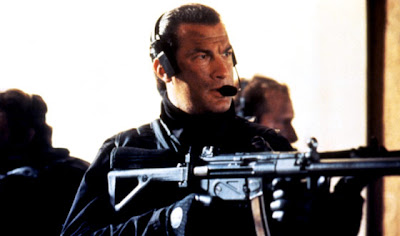 Okay, I understand the emotions many Americans displayed upon hearing the news of the death of Osama Bin Laden. This fella was a really bad dude. And it took Team Six, a top secret, highly trained and anonymous group of navy seals to bring his life to an end. Finally. He'd only been running around free for 10 years, the last six of which were spent kicking back and living the quiet life in some Pakistani suburb. It's only a matter of time before Steven Seagal stars in something called "You May Have Been Hard To Kill But Today You Die and The Free World Achieves True Justice".
But the news also elicited some strange reactions too. Like this quote that quickly went viral on Twitter and Facebook:
“I mourn the loss of thousands of precious lives, but I will not be rejoicing in the death of one, not even an enemy. Returning hate for hate multiplies hate, adding deeper darkness to a night already devoid of stars. Darkness cannot drive out darkness: only light can do that. Hate cannot drive out hate: only love can do that”- Martin Luther King Jr.
But the quote was inaccurate. MJK never said it. Who did say it was one half of an American comedic duo. And it was all a misunderstanding. Here's the story behind the error, if you're interested.
Elsewhere, Rush Limbaugh praised President Obama. He went so far as to say:
"...it was President Obama single-handedly and alone who came up with the strategy that brought about the effective assassination of Osama bin Laden...thank God for President Obama."
I immediately looked to the heavens but I didn't see any pigs flying.
But that wasn't the most bizarre reaction I came across this week. Leave it to Glenn Beck to come up with his own version of Bin Laden's "funeral march":

bigmikesinphilly said…
good shit. "Bin There, Laden That". I've heard a million word plays over the last 48 hours using his name and that's the best one yet.
5 May 2011 at 09:10

nonamedufus said…
bigmikesinphilly: I couldn't have done it without Al. You might say al ki(n)da helped me.
5 May 2011 at 10:53

Kelly said…
I'd rather gouge by eyes out with a spork and stick chopsticks in my ears than watch or listen to anything Glenn Beck has to say.

Rico Swaff said…
Glenn actually had me going for a bit there. Coming from an area who loves the guy (I'm neutral personally,) I was confused as hell until he brought the band out.

meleah rebeccah said…
"Bin There, Laden That". is friggen brilliant.

nonamedufus said…
meleah rebeccah: Every once and a while I'll come up with a good one. Glad you appreciate it.

Yeah, that was an odd story about the quote. And it's how it went viral with everyone believing it. We had an incident here a while back where a reporter re-tweeted the news that Gordon Lightfoot had died. People were quite surprised, not to mention Gordon Lightfoot. He's still alive and well. The whole thing caused quite a sensation and wasn't even true.
5 May 2011 at 16:24

http://howtobecomeacatladywithoutthecats.blogspot.com said…
I'm sure Steven Segal would do the story justice... it's right up his alley. (I love that he's become such a caricature of himself.) Pigs have certainly got to be flying somewhere... probably in hell, now that it's frozen over. As for Glenn Beck... once a douche, always a douche. And for the record... No, I don't need to see gory pictures of Bin Laden dead, thank you very much!
(Is that ellipsis thing working for you?)
5 May 2011 at 18:33

Linda Medrano said…
What kind of disturbed me is that at first I thought Glenn Beck was making sense. Whew! So glad I was wrong.
5 May 2011 at 18:51

nonamedufus said…
Boom Boom: When I thought of Team 6 the first thing that crossed my mind was Seagal and those "seal" movies he did. I'm sure someone somewhere is right now writing the movie script or working on the software for a video game.
5 May 2011 at 18:54

Don said…
Umm, there is not Seal Team 6, hasn't been for years, that was a "buzz name" for the one and only Seal Team at it's origins to make the Russians think there were more teams like the one...

Other than that, Obama had nothing to do with the development of the plan, other than to wait over a month to give it the go, and then only because intel said that bin Laden may be moving soon from where he was.

I'd like to see verifiable pictures that it was bin Laden that was shot, but doubt we ever will. Don't want to see it for the blood and brains though, just as an "ID" of the cadaver..

nonamedufus said…
Don: All I know is I read it on the internet (see link in post) so it must be true. Like you, without pics, I'm sceptical. Yet I understand what showing those images might incite. Having said all that I think the world is a better place today.
5 May 2011 at 20:58

Bonnie said…
Christian countries like America dont have a culture where the death of anyone or revenge is celebrated.But theres always someone, who is a bit wierd & its natural. And unfortunately I reckon that events havent come full circle either because the war on terror is still on and troops are going to be fighting against terrorism in places like Afganistan for a long time. I suppose its good that bin laden got what he deserves but maybe terrorism threats are still real.
6 May 2011 at 09:50

meleah rebeccah said…
"Bin There, Laden That". is friggen brilliant.