May 12, 2011
My son, who I've come to call "Mulligan Matt", and I were out earlier this week attempting to whack little white spheres with long, narrow sticks. Some people call it golf, but my son has a another word or two for it which I shan't repeat here. Although one shouted expletive deleted starting with f and ending with uck had the elderly couple behind us waiting for us to tee off picking their jaws up off the ground.
This is my first season of golf. I started playing on our holidays in Panama in December, after my wife had bought me a set of clubs. Four weeks golfing in Panama was actually a warm-up for a fifth week in Orlando with my brothers Whitey and Drinksalot who both have been golfing since they were kids. In their game you drink about as much as the number of golf balls you hit. So I was pretty much sober, you understand. Nevertheless, they still were better golfers than I. 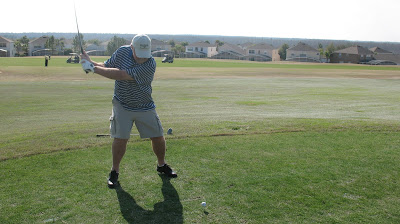 Dufus keeps eye on ball while trying to remember 576 other things to do while driving.
Since Orlando, my son and I kept our form...or attempted to...by doing virtual golf once or twice a week. That's where Matt got his nickname. If you didn't like your shot you could just push the "mulligan" button and do it over again. Of course our golf games would tend to run a tad on the long side this way but, hey, we were having fun.
Our first trip to a real course was about the second week of April. The weather wasn't bad but the course was extremely wet with puddles and mud everywhere. It was so bad they didn't allow you to rent a motorized cart. By the time we'd finished...mulligans and all... our feet were soaked and our pant legs were covered in mud. Of course part of that was from just walking the course!
We've been out several times a week since then. We get a motorized cart now. Conditions have improved. And so has our game. I'm shooting in the low 100s. Not bad for a beginner. Of course that's not counting balls lost in the rough, do-overs, dropped balls and mulligans. And my son appears to be at a similar skill level. So neither of us feels overly outplayed by the other.
So I'm feeling good that I'm on a par (pun intended) with my 30 year old son. On the fairway. I have a way to go to catch up on the language he uses to address the ball.
For you golf enthusiasts, especially beginners like me, here's a tip from my good friend Dorf, whose approach to the ball is amazingly a lot like Mulligan Matt's:

nonamedufus said…
Thanks, I think. Hey, it's fun. When people ask me what my handicap is, I say "golf". I'm trying to convince my wife to take it up. There's nothing else quite like showing how inadequate you are in front of your loved one!
12 May 2011 at 14:34

nonamedufus said…
Sometimes when you drink and golf a designated golfer is advisable.
12 May 2011 at 14:34

Cheryl said…
nonamedufus, you are a hoot! I need to be getting off my rear and go to the gym but here I sit laughing at you (not with you). That is hysterical. Hubby and I both got a set of clubs (hhhmmm not sure exactly) let's say 6 years ago. Hubby went once to a driving range where the f ending with uck came into play. My clubs are still in the large box they came in.
So....I am really impressed with your tenacity to actually try this sport and go out more than one time. My sports hiking and running only require me to stay upright and finish. No pressure to score any kind of a number.

Because I know we are the same age thanks to your birthday post, I will not be taking up anything that requires me to compete. (blood pressure and stress are best friends you know) I want to live to be 60.
12 May 2011 at 14:34

Kelly DeJongh said…
The one and only time I played golf, I ended up with a concussion. And a destroyed golf cart. Alcohol may or may not have been involved.
12 May 2011 at 14:34